Rajkummar Rao took to his Instagram stories and praised the teaser. Varun Dhawan and Kriti Sanon starrer Bhediya's teaser was dropped today. It has been trending since morning as fans are giving it a big thumbs up. The makers have also announced the trailer date. It will be out on October 19, when Varun completes a decade in Bollywood. Amar Kaushik's directorial will be released on the silver screen on November 25. For the last few days, the lead actors have also been shooting for the song for the film. It also stars Deepak Dobriyal and Abhishek Banerjee in pivotal roles.

The film marks Amar Kaushik's third directorial after Rajkummar Rao-Shraddha Kapoor starrer horror-comedy Stree and Ayushmann Khurrana-led comedy drama Bala. The Stree actor took to his Instagram stories and praised the teaser. He called it ‘Zabardast Hai Bhai’. The teaser starts with a wolf staring at a house and then chasing a human in the hills of Arunachal Pradesh. The video does not show the face of the main characters though. Bhediya's story is expected to revolve around 'Save the forests' theme.

Rajkummar Rao was last seen in Badhaai Do and HIT. 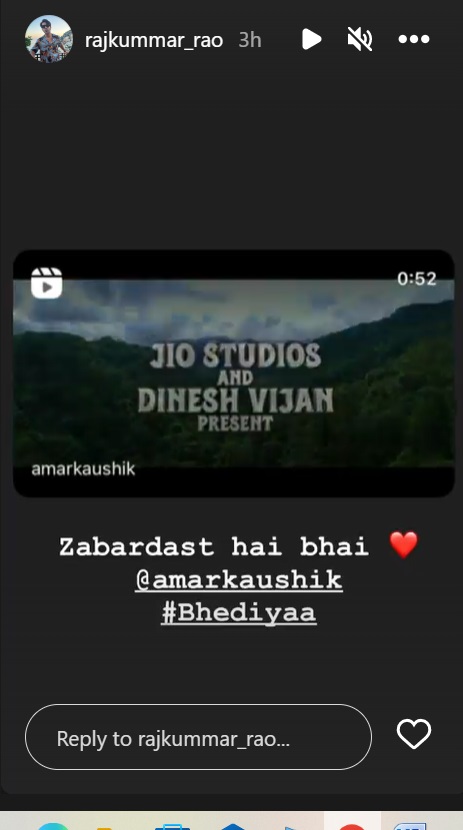 He will next be seen in Mr & Mrs Mahi opposite Janhvi Kapoor. This will be the second time Rajkummar and Janhvi will be collaborating after their horror-comedy Roohi. The shooting of the film has begun. Janhvi Kapoor also shared a picture today from the shooting scene.

Also Read: Mr and Mrs Mahi: Janhvi Kapoor shoots at the same spot where she filmed Dhadak 5 years ago; PICS