Deepika Padukone and Ranveer Singh are among the most adored couples in B-Town. The duo have been together for almost a decade now and their love is still blooming. Apart from sharing their lives together, they have been seen on-screen together, on a number of occasions. Ram Leela was the first film where they scared screen space and it was followed by Bajirao Mastani, Padmaavat and 83, all of which netted over Rs. 100 crore in India.

Ranveer Singh shared a very classy looking picture of him in a pink cord set. The actor looked very stylish. He also sported long open hair, which is said to be his look from Rocky Aur Rani Ki Prem Kahani. Wife Deepika Padukone didn't hold back to share how she felt about the photos shared by Ranveer. She commented under his post, and wrote 'Edible'. Ranveer Singh replied to her comment in emojis. The conversation they had under Ranveer's post was enough to show the electrifying chemistry that the pair shared.

Have a look at Ranveer Singh and Deepika Padukone's interaction under the former's post: 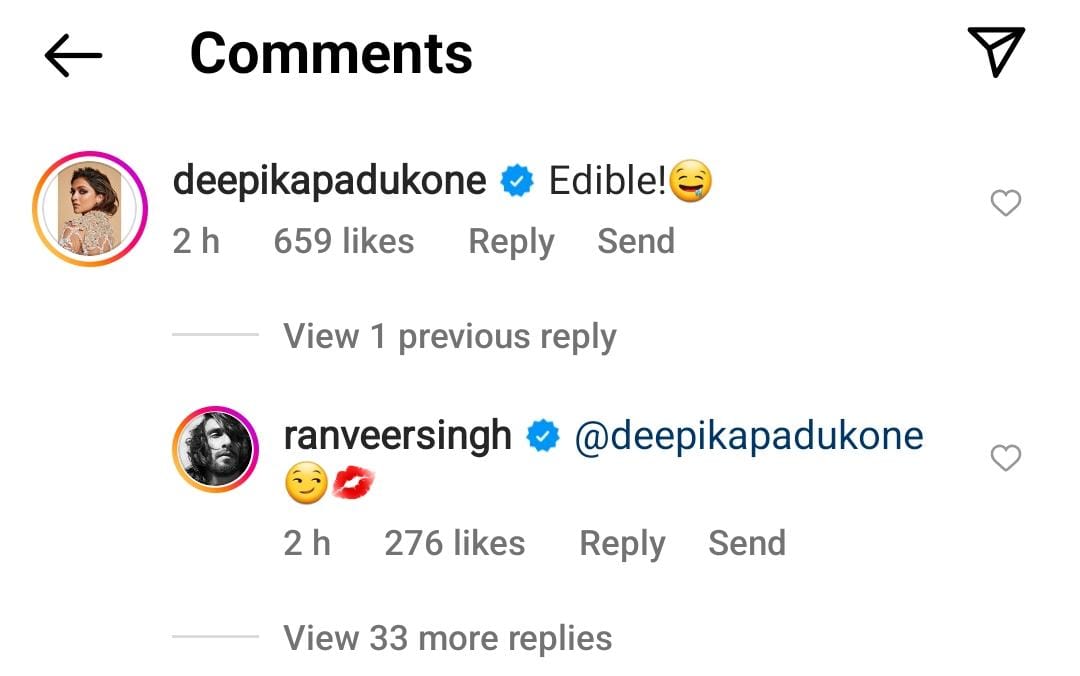 On the work front, Ranveer Singh will next be seen in Rohit Shetty's Cikrus, co-starring Jacqueline Fernandez and Pooja Hegde. Then he has Karan Johar's Rocky Aur Rani Ki Prem Kahani, co-starring Alia Bhatt. Apart from the projects mentioned, he is also trying to work with S. Shankar on a renewed version of Anniyan. As about Deepika Padukone, she will next be seen in Pathaan with Shah Rukh Khan and John Abraham. Post that, she is be seen in some really big movies like Jawan, Fighter, Project K and an untitled cross cultural romantic drama film.

Anonymous
Oct 03, 2022 07:11 PM
Deepika and Ranveer is heart and soul in the most passionate way! GOD BLESS DEEPIKA & RANVEER!
0 REPLY