Ranbir Kapoor has been basking in the success of his recently released movie Brahmastra. Before the film’s release, Ranbir had been extremely busy with back-to-back promotional events for Brahmastra. Now, the actor is all set to celebrate his 40th birthday tomorrow, and looks like his family members are already super-excited to celebrate it. Ranbir’s sister Riddhima Kapoor Sahni has expressed her excitement for his birthday, and has shared a special ‘birthday eve’ post for Ranbir.

Riddhima Kapoor Sahni, who is quite active on social media, took to her Instagram story to post an adorable selfie with her brother Ranbir. The picture is from Ranbir and Alia’s wedding reception, and it shows sibling duo Ranbir and Riddhima huddled together, smiling for the selfie. Ranbir can be seen in a black suit, while Riddhima can be seen looking pretty in a blingy one-shoulder outfit. Showering love on her brother Ranbir, Riddhima Kapoor wrote, “Birthday eve,” along with heart emojis. Check out her Instagram story below. 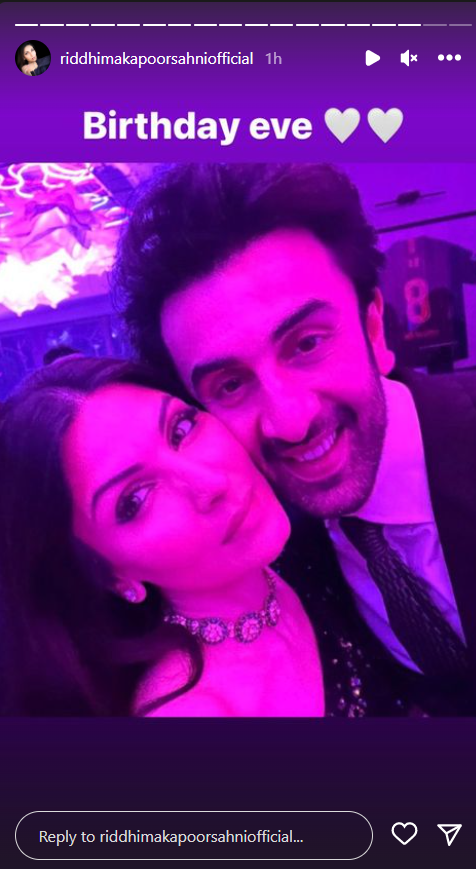 Ranbir Kapoor will be celebrating his birthday with his wife Alia Bhatt for the first time post their marriage. Alia and Ranbir tied the knot on April 14 in an intimate ceremony in the presence of close friends and family. The couple is expecting their first child together, and they announced the happy news on social media by sharing an adorable picture from the hospital in June.