Alia Bhatt and Ranveer Singh will soon be seen together in their upcoming film Rocky Aur Rani Ki Prem Kahani, and fans just cannot wait. It is among the most highly-anticipated movies and Alia and Ranveer will be seen again on the big screen after Gully Boy. This film also marks Karan Johar’s comeback as a director after many years. The last feature film that he directed was Ae Dil Hai Mushkil, which released in 2016, and starred Anushka Sharma and Ranbir Kapoor in the lead roles. Rocky Aur Rani Ki Prem Kahani, which was earlier slated to release in February 2023, has now been postponed, and will release in April 2023 instead. The makers have finally locked a new release date of the film, and Karan Johar has shared an update about the same.

Karan Johar took to his Instagram account to share a statement regarding the release date of the film starring Alia and Ranveer. In his note, he mentioned that the film will release in theatres on 28th April 2023. The note read, “After 7 years, it's time for me to return to my first home- the cinemas. I had the absolute honour of working with not one, but many illustrious actors on the set of my 7th film. The familial nostalgic feeling of an ensemble cast, creating music that captivates the hearts and a story that runs deep to the roots of our family traditions.”

Concluding the note, KJo wrote, “It's that time again- to huddle with your family and friends, buy the popcorn and witness just sheer love and entertainment unfold on the big screen. We're overwhelmed and impatiently excited to finally inform... Rocky Aur Rani Ki Prem Kahani in cinemas 28th April 2023.” Check out his complete post below. 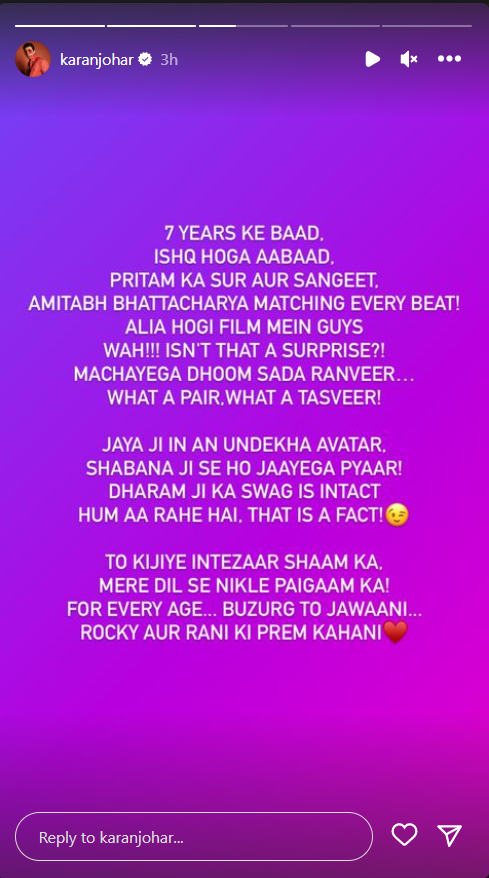 Anonymous
Nov 13, 2022
Post-pandemic Bollywood is loud and tiresome aggressive propaganda, fewer good films combined with bogus box office collections, loads of actors undeservedly supported over talented ones, but no chance to assert themselves. Bollywood today has actors who don\'t know how to talk, you don\'t understand anything from them when they give interviews, they don\'t have any logic in expressing speeches they are controversial with sinusoidal statements. The low attitude media full of trolls who deal with lies and speculations usually completely false but mechanically repeat like monkeys the same news after another without citing who released it and whether it was properly verified. Producers, toxic executives who spread a lot of false rumors, gossip and dirt to trap the audience for sensationalism, all this makes for real kitsch of very poor quality.
0 REPLY

Anonymous
Nov 13, 2022
Karan is brave to release the movie on the same day as the release of PS2. Karan movie will flop.
0 REPLY

Anonymous
Nov 12, 2022
RS is now flop. KJO should have casted kartik Aryan for the role.
0 REPLY

Anonymous
Nov 12, 2022
Yeah, and high time he climbs ofc his snobbish horse and give outsiders a sporting chance.....
0 REPLY