Saif Ali Khan and Kareena Kapoor Khan are one of the most-loved couples in Bollywood. These two are always making heads turn with their fashion game and often set couple goals. Saif Ali Khan and Kareena Kapoor Khan are one of the most-loved couples in Bollywood. These two are always making heads turn with their fashion game and often set couple goals. The paparazzi never miss a chance to click them whenever they are spotted together. Kareena and Saif were snapped at the Mumbai airport early in the morning today. The couple is heading to Jeddah as mentioned in Kareena’s Instagram stories. The actress, who is quite active on social media shared a couple of pictures on her Instagram stories and that is proof of the fun she is having with hubby Saif on the flight.

Saif Ali Khan looked royal in a white coloured kurta-pyjama which he paired with a beige-colored Nehru jacket. He completed his look with brown shoes and black sunglasses. Kareena Kapoor Khan on the other hand looked stylish in a black and white co-ord set that she layered with a black leather jacket and black boots. The actress carried a brown coloured tote bag and held Saif’s hand while walking inside the airport. Kareena also shared a couple of pictures from the flight. In one of the pictures, Bebo has snapped her hubby Saif sitting on the flight and he seems to be resisting getting clicked. 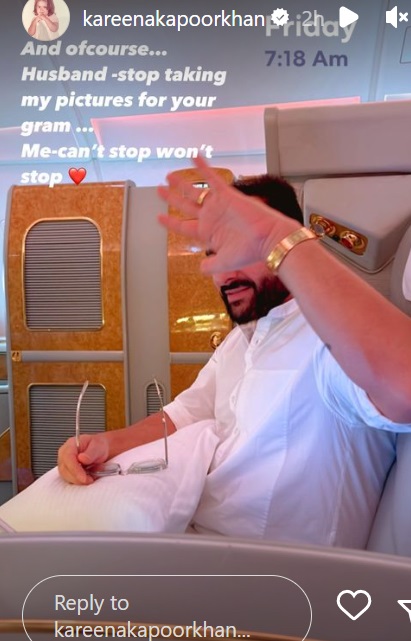 Saif will be next seen in Adipurush with Prabhas and Kriti Sanon. The trailer was launched recently and it ended up receiving a backlash from the audience. Post the severe trolling, the makers postponed the release. Earlier it was slated to release in January 2023, but now it has been shifted to June 2023.

The popular star is finally set to make her debut as a producer, with the highly anticipated untitled film, helmed by Hansal Mehta. Kareena Kapoor Khan is co-producing the movie along with the filmmaker, and renowned producers Ekta Kapoor and Shobha Kapoor. She is expected to officially launch her production house along with the title and first look poster of the movie, which is touted to be a crime thriller. Kareena Kapoor Khan is said to be playing a detective in the film, which will not have a male lead.

She is also set to make her digital debut with the upcoming Netflix project, helmed by Sujoy Ghosh. The movie, which is said to be an official adaptation of The Devotion of Suspect X, features Kareena Kapoor Khan, Vijay Varma, and Jaideep Ahlawat in the lead roles. The untitled project is expected to release in the first quarter of 2023.

Karan Johar drops UNSEEN PIC of Taimur on his 6th ...