Sara Ali Khan is one of the most loved stars in Bollywood from the current generation. She always turns heads with her fashion game and is a favourite of the paparazzi too. Sara Ali Khan is one of the most loved actresses of the current generation. She has proved her versatility with every new film and there is no looking back for her. Apart from being a fabulous actress, Sara also makes sure to stay fit and never misses her workout sessions. The actress often gets spotted outside her gym and the paparazzi never miss to click her. Even the Kedarnath star greets the paps sweetly. But yesterday was a bit different as the actress hid her face from the paparazzi after stepping out of her gym which made everyone curious. But, today she took to her Instagram stories to give a glimpse of her morning selfie.

Taking to her Instagram stories Sara Ali Khan shared a boomerang video of her. She can be seen sitting in her car. The actress has left her hair open and can be seen rubbing a piece of ice on her face. Sara has used an Instagram filter which has made her face look even pinker and has changed her eye colour too. Sharing this picture, Sara wrote, ‘Earlie morning facie!’. 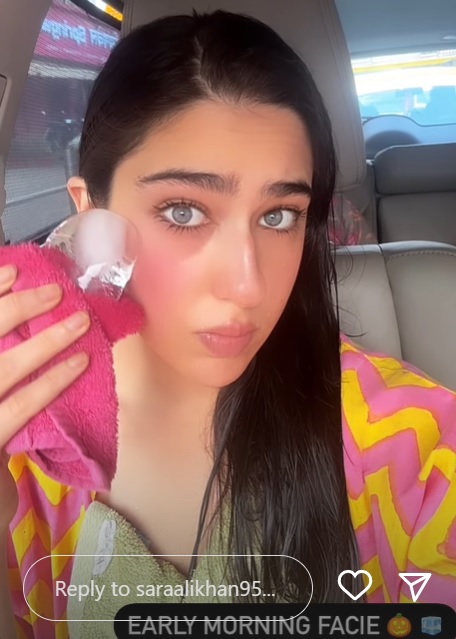 Sara has been hitting the headlines recently for her alleged relationship with cricketer Shubman Gill. The two have also been spotted several times. However, the duo has not yet confirmed the dating rumors. The actress was previously dating her Love Aaj Kal co-actor Kartik Aaryan.

Meanwhile, on the work front, Sara recently announced her new film titled, Ae Watan Mere Watan where she will play the role of a freedom fighter. Next, she will be next seen in Laxman Utekar’s upcoming untitled film with Vicky Kaushal. Sara is also a part of Gaslight with Vikrant Massey and Chitrangada Singh.

Anonymous
Nov 26, 2022
Below average in every way from looks to acting to personality and yet she continues to survive in this industry due to family connections and gora skin!
0 REPLY