Bollywood actress Kareena Kapoor Khan is celebrating her 42nd birthday today, and her fans, friends, and family members are making it extra special by sharing the most amazing birthday wishes and posts for the actress. Celebrities such as Malaika Arora, Amrita Arora, Sonam Kapoor, Alia Bhatt, and many others took to their social media to wish Bebo. Now, Sara Ali Khan has also shared a cute message and a picture with baby Jeh, while wishing Bebo.

Sara Ali Khan took to her Instagram story to post an adorable picture that shows Kareena Kapoor Khan holding baby Jeh. Saif Ali Khan posed in the centre, while Sara can be seen looking lovingly at the little munchkin. Sharing the cute picture, Sara Ali Khan sent her best wishes to Bebo on her birthday. “Happiest Birthday @kareenakapoorkhan Wishing you all the love, luck, laughter and happiness and cake today! Hope you have the best year ahead,” wrote Sara. Kareena Kapoor Khan reported Sara’s birthday wish, and dropped heart emojis in response. 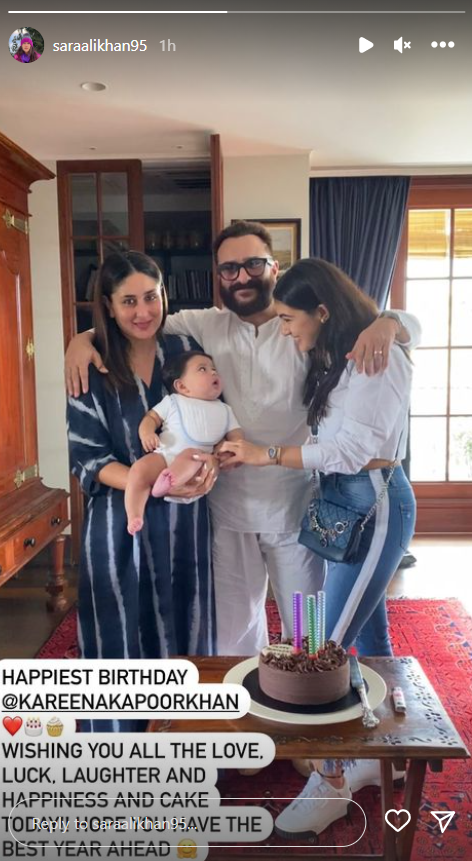 Sara Ali Khan has often been vocal about her admiration for Kareena Kapoor Khan. In an earlier interview with Filmfare, Sara said that she has always been a fan of Kareena. “Even today there’s an element of surprise that Poo from ‘Kabhi Khushi Kabhie Gham’ (K3G) is my stepmother. People say I willed it to happen. I must have. After Sridevi, I’m a Kareena Kapoor fan. As far as our equation is concerned, I was clear from the beginning that anyone who makes my father happy – not specifically Kareena – makes me happy. Anyone, he loves, I love. I don’t need to know who that person is. It’s about my father,” said Sara. Sara Ali Khan reveals how she 'melted' on meeting ...