Mom-to-be Alia Bhatt, who will soon embrace parenthood along with hubby Ranbir Kapoor, has opted for a cheat diet and this time with a pizza. Mom-to-be Alia Bhatt, who will soon embrace parenthood along with hubby Ranbir Kapoor, has opted for a cheat diet.

Mom-to-be Alia Bhatt and hubby Ranbir Kapoor, who will soon embrace parenthood, are busy promoting Brahmastra with full force nowadays. The film is clearly a success as it has earned over Rs 300 crores at the box office globally. Amidst ongoing high-scale promotions of the film by the lead actors of the film, the Raazi actor makes sure to maintain a proper diet.

However, today is an exception to her regular days as Alia Bhatt has opted to go for a cheat meal. And guess who fulfilled Alia’s midnight cravings? No, it is not Ranbir Kapoor. It is Bollywood actress Shilpa Shetty who sent her a yummy-licious pizza at her home at midnight.

Thanking Shilpa for the same, Alia wrote, “Thank you my dearest @theshilpashetty for this yummy yummy pizza…best I have eaten!!!!!”

Reacting to Alia’s Instagram story, Shilpa Shetty thanked her and wrote, “So glad you liked it. More coming soon. Enjoy @aliabhatt” with a heart emoji. 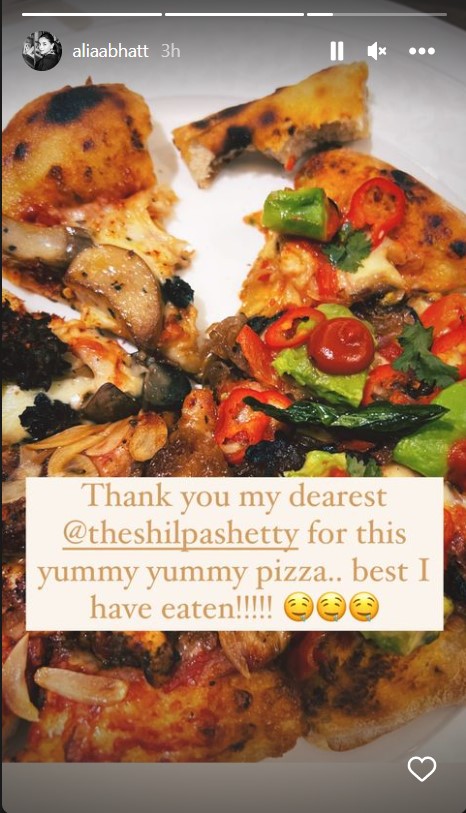 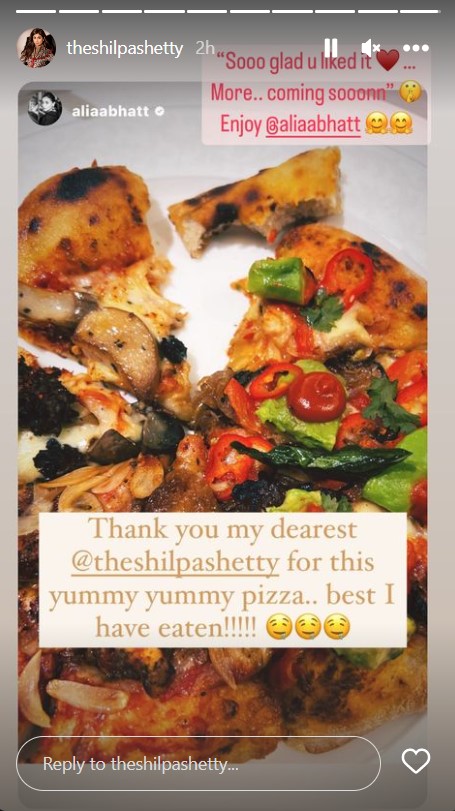 Earlier on September 18, Alia highlighted her cravings for pizza as well. The mom-to-be took to Instagram on September 18 at midnight to ask her fans about pizza places in Mumbai. Using the question-answer feature on Instagram, she wrote, “Guys, what’s the best pizza place in Mumbai? Cravings”.

Clearly, Alia Bhatt is a pizza lover. In recent media appearances, Alia Bhatt has impressed her fans with her pregnancy glow and we are loving it.

This year has clearly been a memorable year for RanLia fans. The couple tied a knot in April this year, setting the internet on fire with netizens dropping heart emojis on social networking sites like a flood.  Just months after the couple got married, the duo broke the news of embracing parenthood soon. And to add a feather to the hat, the film Brahmastra ----which is Ranbir and Alia’s first film together after marriage on screen----has earned over Rs 300 crores globally. We wish the couple good luck for the future ahead!

Meanwhile, on the work front, Shilpa Shetty will mark her big OTT debut with Rohit Shetty’s Indian Police Force. She will also be seen in Sonal Joshi’s Sukhee.

Also Read: Ranveer Singh and Deepika Padukone to play lead roles in Brahmastra Part Two? Here is what we know