Check out Shraddha Kapoor’s latest selfie on the ‘gram. Shraddha Kapoor is one of the most popular actresses in B’Town. The actress enjoys a huge following on social media, and she makes it a point to entertain her millions of fans with glimpses of her personal and professional lives every now and then. Speaking of which, lately, Shraddha has been sharing sneak peeks of her Navratri celebrations as she drops photos of her in outfits that coordinate with the colour for each day of the festival. And so, as day three of Navratri is associated with the colour blue, she shared a selfie wearing the same hue. Check it out.

A few hours back, Shraddha took to her Instagram space and shared a picture on the story feature on the social media platform. The Aashiqui 2 actress shared a boomerang as she clicked a mirror selfie and winked at her reflection. She can be seen wearing a blue top and her hair is left open. The actress had minimal makeup on. Sharing the photo, Shraddha wrote, “Navratri Day 3 – Royal Blue Tranquility (meditation emoji) 9Ratri9Rang.” 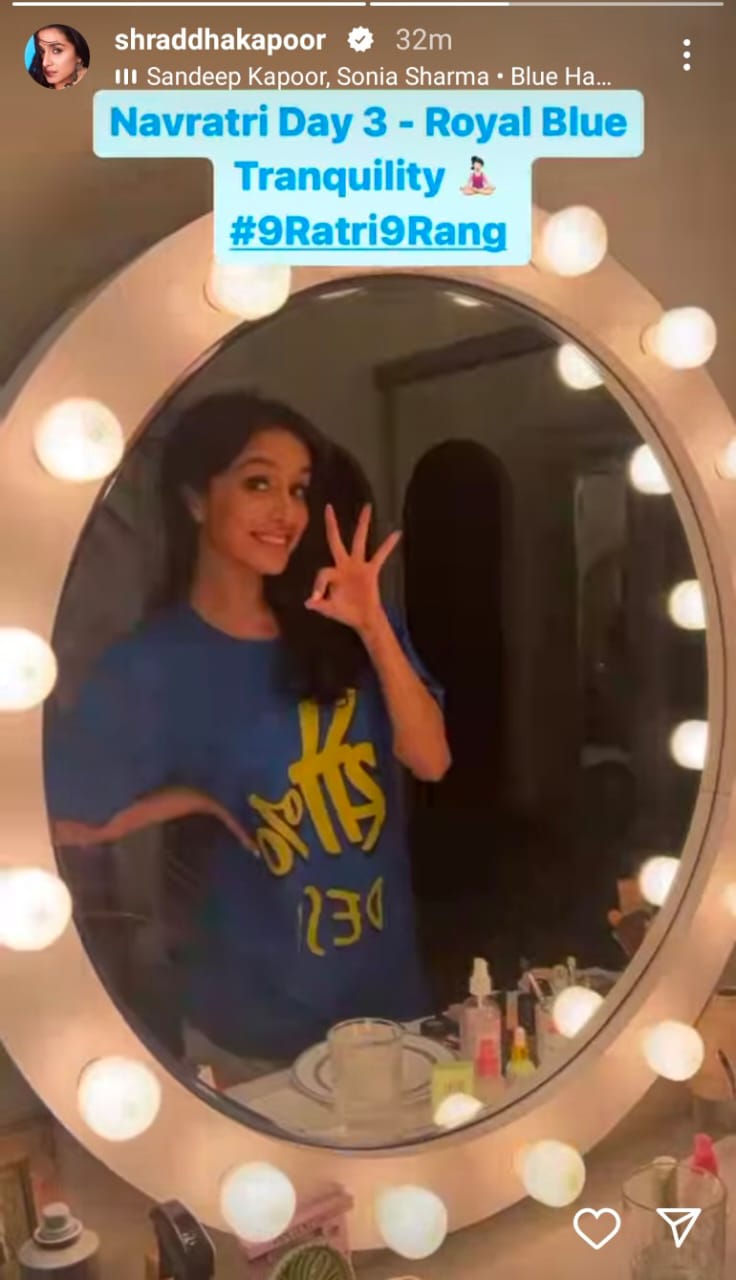 Shraddha Kapoor was last seen in the 2020 actioner Baaghi 3, which marked her second collaboration with Tiger Shroff. She now has quite a few interesting projects in the pipeline. Shraddha will be soon seen in Luv Ranjan’s yet-to-be-titled film, where she will share screen space with Ranbir Kapoor. Moreover, she has been also roped in to play the lead role in the upcoming trilogy helmed by Nikhil Dwivedi, which is said to be based on the myth of Naagin. The rumour mills suggest that she is also a part of the Tezaab remake, which features Kartik Aaryan in the lead role.

ALSO READ: Shraddha Kapoor drops a SELFIE in red tee as she celebrates ‘passion and love’ on Day 2 of Navratri

Shraddha Kapoor calls green a colour of ‘Growth an...