Sidharth Malhotra and Kiara Advani's relationship has been the talk of the town ever since they almost conformed it on KWK7. These two lovebirds are reportedly going to tie the knot in December. Sidharth Malhotra often makes sure to be there and cheer for his girlfriend Kiara Advani. After Govinda Naam Mera’s trailer was released, Sidharth took to his Instagram stories to share a poster of the film featuring Vicky Kaushal, Bhumi Pednekar and Vicky Kaushal and wrote, “Exciting cast and the intriguing plot looks like a mad fun ride, really looking forward guys.” A couple of days before, Sidharth was even there to cheer for Kiara’s brother Mishaal who released his new song and supported him on social media. 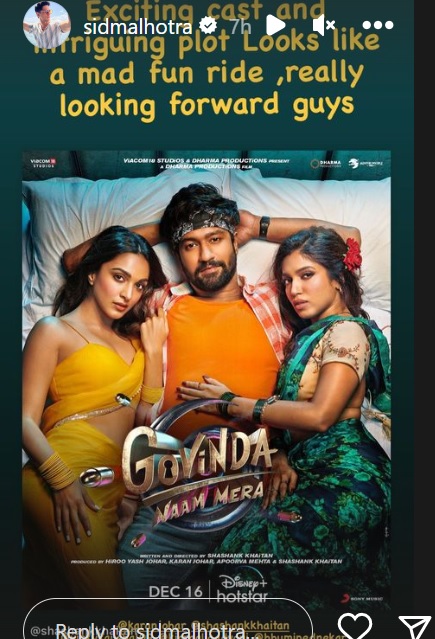 A source close to Sidharth Malhotra told Pinkvilla that the Shershaah jodi has been scouting wedding locations for a month and we have learnt that one of the luxurious properties that Kiara & Sid contacted was Chandigarh's The Oberoi Sukhvilas Spa & Resorts, it is the same location where Rajkummar Rao and Patralekhaa had got married. Source added, "They (Kiara and Sidharth) also gave a thought on changing the destination to Goa but considering Sidharth's big-fat Punjabi family, the plan of tying knot in Goa was dropped."

On the work front, Sidharth will also star next in Yodha, Mission Majnu, and Indian Police Force.