Soha Ali Khan and Kunal Kemmu’s daughter Inaaya Naumi Kemmu is one of the most loved star kids of B-Town. The actress often shares the most adorable pictures and videos with Inaaya, leaving fans mesmerized by her cuteness. Inaaya’s photos never fail to make fans smile, and they instantly go viral on social media. It is no secret that Inaaya loves to sketch. Soha Ali Khan often shows off her daughter’s cute sketches on her Instagram stories, and looks like, Inaaya decided to make a sketch of her cousin Taimur Ali Khan.

Soha Ali Khan took to her Instagram stories to flaunt her daughter Inaaya’s sketch. The picture shows a folded card, over which Inaaya had attempted to create a sketch of Taimur. She drew a sketch of a boy wearing a red shirt and blue pants and had his arms wide open. Next to the sketch, Inaaya wrote ‘Themoorbi’ in her cute little handwriting. Sharing the picture, Soha Ali Khan tagged Kareena Kapoor Khan and wrote, “Guess who?” 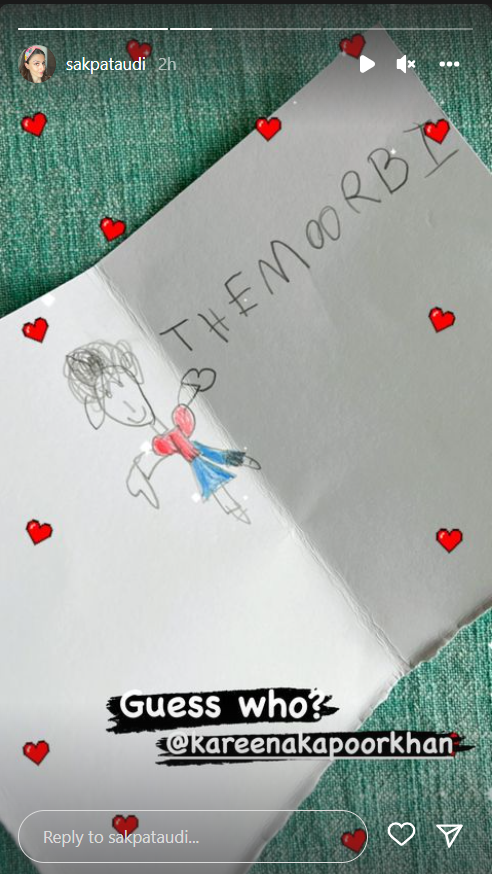 Earlier today, Soha Ali Khan also shared a reel that shows Inaaya shopping for groceries with a checklist in her hand and a tiny shopping cart. Soha Ali Khan wrote, “We got everything on our list!! #shopping #todolist #missionaccomplished.”

Soha Ali Khan and Kunal Kemmu welcomed their daughter Inaaya in September 2017. Inaaya and her cousin Taimur are just a few months apart and are often seen hanging together. Speaking about their equation, Soha had told ETimes in an earlier interview, “Inaaya listens to Taimur a lot, she tries to copy whatever he does and wants to be faster than him. As they say, when you have an older sibling, you try and learn faster.”

On the work front, Soha Ali Khan will next be seen in Hush Hush, a seven-episode thriller series that will release on Prime Video on September 22. The series also stars Juhi Chawla, Ayesha Jhulka, Kritika Kamra, Shahana Goswami, and Karishma Tanna in the lead roles. Kareena Kapoor Khan enjoys a hearty meal with her ...