In a series of Instagram stories, Sonam Kapoor talked about her pre-natal journey, childbirth, and breastfeeding her son Vayu. Sonam and Anand Ahuja welcomed their son in August this year. Bollywood actress Sonam Kapoor, and her husband Anand Ahuja welcomed their baby boy Vayu in August this year. The new parents have been over the moon since then, and have been sharing cute glimpses of the little one on Instagram. Recently, Sonam Kapoor gave fans a sneak peek inside baby Vayu’s jungle-themed nursery. Now, the new mom has also opened up about her pre-natal journey, childbirth, breastfeeding, and much more in a series of Instagram stories.

Sonam Kapoor on her pre-natal journey

In her stories, Sonam shared that she wanted to have a natural journey with as little ‘intervention’ as possible, for which she took the help of the ‘gentle birth method.’ She wrote, “My pre-natal journey was quite different. I was very sure I wanted to have as natural a journey as I could that would lead to a natural delivery with as little intervention as possible. For that I decided to take help of ‘gentle birth method’ with Dr Gowra Motha. She had written a lovely book called Gentle Birth Method that explains how to deal with the prenatal journey."

She further added that the doctor is a practicing ob-gyn in London, and that she uses a lot of Ayurvedic practices, creative healing and homeopathy. “I’ve followed her blindly. I’ve had a natural quick birth thanks to all her teachings and I’m breastfeeding pretty easily", wrote Sonam. 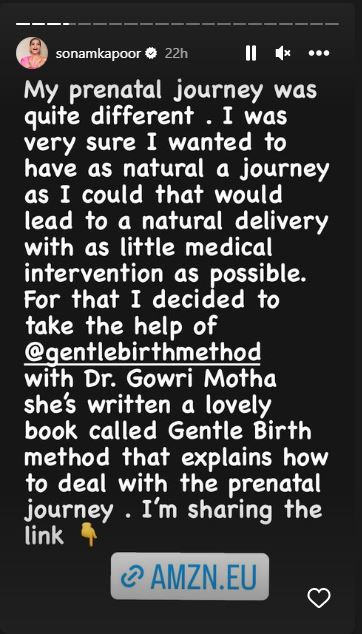 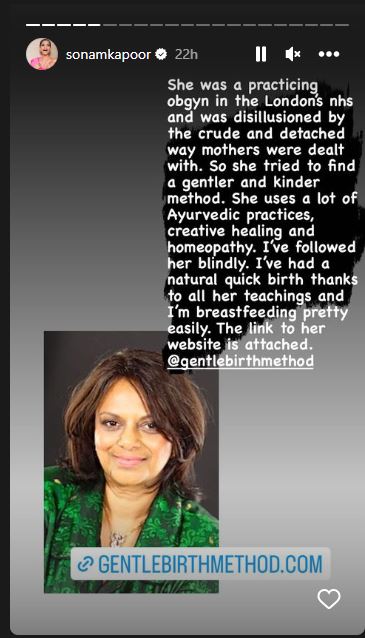 She further shared that apart from the linea nigra, she has no stretch marks at all, and shared pictures of the products that she used. She also revealed she consumed a lot of protein, took Vitamin C, and drank collagen. Speaking about pigmentation in South Asian women during pregnancy, she added that using sunscreen with SPF is the best way to minimise it.

Sonam Kapoor had a cameo in Netflix’s black comedy thriller film AK vs AK, which starred her father Anil Kapoor and Anurag Kashyap in the lead roles. Sonam will next be seen in Shome Makhija's directorial Blind, which also stars Purab Kohli, Vinay Pathak and Lillete Dubey.