Rima Jain, mother of Aadar Jain, has turned a year older today. She shares her brother with nephew Ranbir Kapoor. Well, wishes are coming for her too from the Kapoor family. Kareena Kapoor also wished her and shared a picture. She even called her ‘most favourite person’. Rima Jain is the youngest daughter of the legendary actor Raj Kapoor and Krishna Kapoor. She is the sister of actors Randhir Kapoor, Rishi Kapoor, Rajeev Kapoor, and Ritu Nanda. Well, her son Aadar Jain’s girlfriend Tara Sutaria also wished her on Instagram.

Sharing a picture, the actress wrote, “Happy birthday to our fav, the coolest cat in town.” The picture looks from a party. Rima Jain is married to Manoj Jain. Kareena wrote, “Happy birthday to one of my most favourite people. My Rima aunty @rimosky.” Tara’s film with Tiger Shroff Heropanti 2 failed. Recently, the actor addressed to the failure on Instagram. She was last seen in Ek Tha Villain Returns co starring Arjun Kapoor, John Abraham, Disha Patani.

To note, Tara also made her singing debut alongside Ankit Tiwari in Ek Villain Return’s rock anthem, Shaamat. The music is composed by Ankit and lyrics have been penned by Prince Dubey.

Take a look at the wish here: 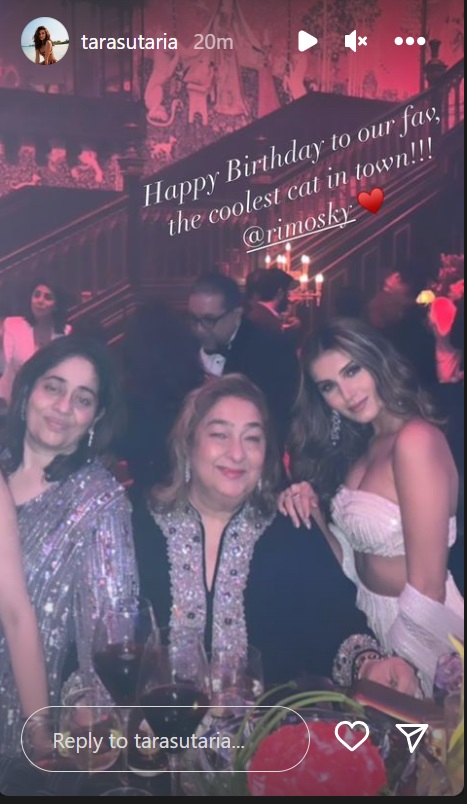 Tara will be next seen in a thriller film ‘Apurva’ directed by Nikhil Nagesh Bhat and produced by Murad Khetani and Bikram Duggal.

Tara Sutaria opens up about her relationship with ...

Tara Sutaria is missing the time she spent with BF...

Tara Sutaria looks every inch a diva in latest mon...

Aadar Jain shares a serene throwback PIC from his ...

Tara Sutaria enjoys breakfast in a pool, drops a s...