Rakul Preet Singh starrer Thank God’s trailer has been released today and fans have applauded it. Thank God starring Ajay Devgn, Sidharth Malhotra and Rakul Preet Singh had its trailer released today. Recently, the makers of the film unveiled a poster of film wherein Sidharth Malhotra along with Ajay Devgn exchanged sharp looks in close proximity. The fans are already wondering what this film will be all about. And to add another element of curiosity towards the film, the makers on Friday dropped the trailer.

The trailer showcases Sidharth as Ayan Kapoor who finds himself in the middle of chaos leading to nowhere after he gets embroiled in an accident. He seeks help from Ajay Devgn, who plays Chitragupt, who offers him to explain the ‘game of life’. Minutes after this trailer was unveiled, several social media users hailed the trailer of the film and poured in widespread appreciation for it by dropping fire and heart emojis in the comments section.

In view of this development, the lead actress of the film, Rakul Preet Singh dropped an Instagram story wherein she said, “Hi guys, I’m so thrilled with the response that you all are giving to the Thank God trailer. Super super excited. Thank you for all the love for Cuttputlli and Thank God.” For the unversed, Rakul Preet Singh's recent movie, Cuttputlli has been released on Disney+Hotstar. It stars Rakul along with Akshay Kumar in the lead roles. 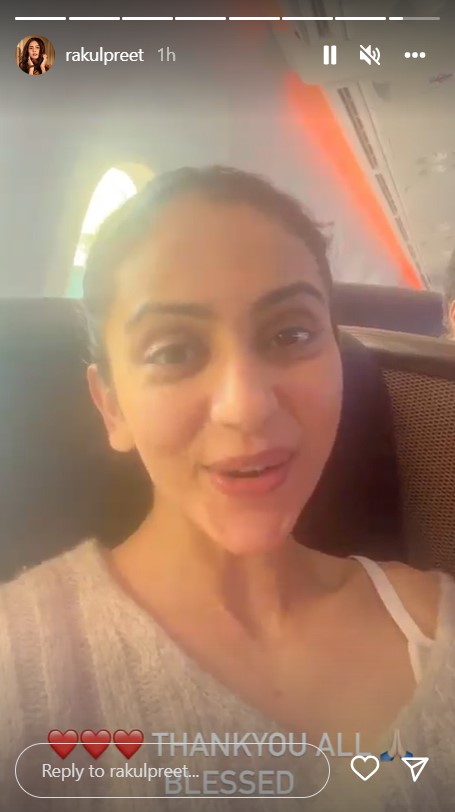 Recently, Sidharth Malhotra, sharing a poster from the film earlier, wrote on Instagram: "This Diwali, hoga sabhi karmon ka hisaab, when a common man comes face to face with Chitragupt in the game of life."

Notably, the on-screen chemistry between Rakul Preet Singh and Sidharth Malhotra has been cherished by many. They both were last seen in the movie Aiyaary and fans drooled over their on-screen appearance back then.

Thank God will hit the theatres on the occasion of Diwali this year.

On the work front, Sidharth Malhotra has completed filming of two of his upcoming films, namely Mission Majnu and Thank God alongside Ajay Devgn. He is currently shooting for Dharma Productions's Yodha. After that, Malhotra will also star in Indian Police Force, a web series directed by Rohit Shetty, which will stream on Amazon Prime Video.

On the other hand, Rakul has a bunch of films in her kitty. At first, she will be seen in two Tamil films namely S. Shankar's vigilante-action film Indian 2 and the science fiction film Ayalaan opposite Sivakarthikeyan.

Along with this, she will star in three more Bollywood films. She will also be featured in Anubhuti Kashyap's Doctor G in which she is paired opposite Ayushmann Khurrana.