Triptii Dimri and Karnesh Ssharma have been rumoured to be dating for a long time now but the recent mushy picture has made these two the talk of the town. Bollywood celebrities and their love life have often been a topic of interest for fans and movie buffs. There is always a lot of curiosity in knowing which actor is dating whom. Well, a lot of Bollywood celebrities opened up about their love lives in the past year. Many made it Instagram official while others let it be speculation and played along with the mystery. One of the couples who did not make it official yet but their pictures celebrating New Year together has been going viral for all the right reasons and making it to the headlines are Triptii Dimri and Anushka Sharma’s brother Karnesh Ssharma. These two have been rumoured to be dating for a long time now but the recent mushy picture has made these two the talk of the town.

Taking to her Instagram handle Triptii Dimri shared a picture of her and Anushka Sharma’s brother Karnesh Ssharma. The picture looks adorable as the actress has hugged Karnesh tightly, while the two seem lost in their own world. The Laila Majnu actress can be seen wearing a black coloured hoodie over black pants. She has her hair left open as she hugs Karnesh who can be seen wearing a red coloured hoodie over black pants. He can be seen planting a kiss on Tripti’s cheeks. This picture is originally shared by Saurabh Malhotra who is an associate producer at Karnesh's production house, Clean Slate Filmz. Triptii reposted this picture by posting 2 heart emojis. 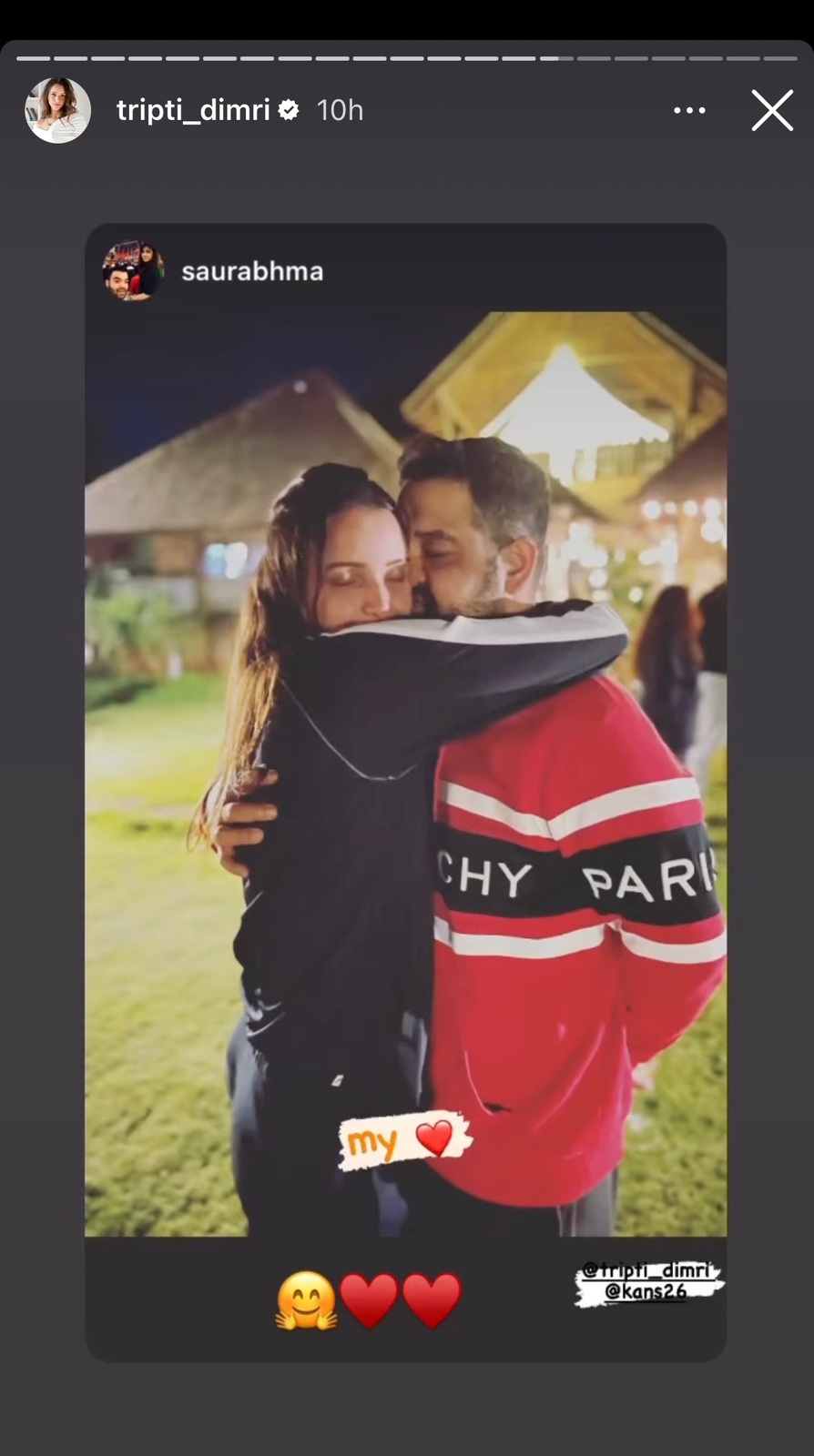 Triptii Dimri made her Bollywood debut with Shreyas Talpade's directorial debut, the 2017 comedy Poster Boys, starring Sunny Deol and Bobby Deol and Talpade in lead roles. It was an official remake of the Marathi film Poshter Boyz, it featured her as Talpade's love interest. Dimri next appeared in a leading role in Imtiaz Ali's 2018 Romantic drama Laila Majnu, opposite Avinash Tiwary. She came together with Karnesh Ssharma when she bagged the main lead in Anvita Dutt’s 2020 supernatural thriller Bulbbul. This film was produced by Anushka Sharma and Karnesh Ssharma’s Clean Slate Filmz. Her performance was praised and loved by everyone. The next film in which Tripti collaborated with Karnesh yet again was the recently released Qala. This film also starred Irrfan Khan’s son Babil Khan. Her performance is still highly appreciated and it speaks volumes.

If you take a close look at Anushka Sharma’s brother's Instagram handle, there are not many pictures of him with Triptii Dimri that you would find. But there is a birthday post for the actress wherein the producer has shared a couple of pictures with the Laila Majnu star. In the first picture, we can see both of them lying on a hammock and having a gala time. The next picture is a selfie of the two. Next is yet again a selfie of the two looking cosy with each other. Sharing these pictures, Karnesh wrote, “Happy birthday to this super special girl! #birthdaygirl #staycrazy.”

Triptii Dimri has a lot of exciting projects on her hand. She was last seen in the Netflix release Qala alongside Babil Khan. Well, apart from this she has Prime Videos' recently announced yet-to-be-titled film. This film will also star Vicky Kaushal and Amy Virk in the lead role. Directed by Anand Tiwari, the yet-to-be-titled movie will be releasing on July 28, 2023. The film will be available for streaming in India and in more than 240 countries and territories post its theatrical run. Apart from this, she has Animal. Animal is touted to be a crime drama and is helmed by Sandeep Reddy Vanga. Apart from Ranbir Kapoor and Triptii Dimri, the film also stars Anil Kapoor, Bobby Deol, and Rashmika Mandanna.

ALSO READ: Anushka Sharma looks like a retro queen as she makes a cameo in Qala; Fans can't get enough of it

Anonymous
Jan 03, 2023
Can\'t Anushka inspire him to lose some weight. Tripti now will get all the roles of his production.
0 REPLY
View more comments