Varun Dhawan and Kriti Sanon will soon be sharing screen space for the film Bhediya. The official poster is already out and was shared by both the actors on their social handles. The film is set to release in theatres on 25 November 2022. In the poster, Varun gave a glimpse of his character. However, today the actor shared a video on his Instagram stories in which he and Kriti are rehearsing for a song. The actor is teasing her as she has returned from vacation. Kriti and her family went to Europe.

Sharing the video, Varun also wrote, ‘European return’. In the video, we can see Kriti wearing black pants paired with a black crop top. She is rehearsing dance and Varun who is making the video is pulling her leg. It is fun watching them. Sharing the first official poster, Varun and Kriti had captioned it, "#BHEDIYA #bheidyafirstlook In cinemas 25 th November 2022." Backed by Maddock Films and Jio Studios, the Amar Kaushik directorial was set to release in the first half of 2022. However, it was pushed to November 2022 due to heavy VFX work. 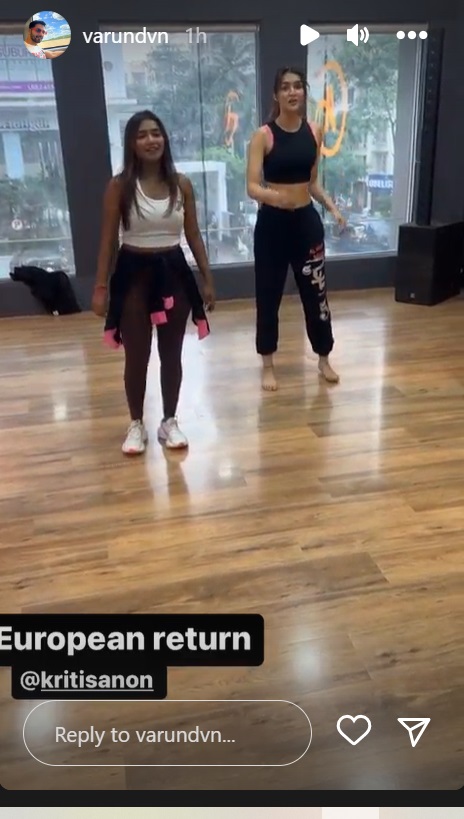 Varun also has Bawaal in his kitty. He will be sharing space with Janhvi Kapoor and it is slated to release next year. The actor had shared the poster on his social handle.

Talking about Kriti Sanon, she will be next seen in Shehzada co starring Kartik Aaryan. She also has Ganapath where she reunites with her debut co-star Tiger Shroff. Om Raut's Adipurush with Prabhas and Saif Ali Khan is also in the pipeline.