Vicky Kaushal is listening to THIS song of Dilijit Dosanjh on loop; Calls it ‘Bliss’

Vicky Kaushal is listening to THIS song of Dilijit Dosanjh on loop; Calls it ‘Bliss’ Vicky Kaushal will be next seen in Sam Bahadur and the actor has been prepping a lot for the film. He also flew to Jodhpur for the shoot and was also clicked at the airport with Fatima Sana Shaikh. He is an amazing actor who rose to prominence with supporting roles in Raazi and Sanju. His film Uri: The Surgical Strike made him win the National Film Award for Best Actor. However, he also loves to listen to music and especially Punjabi. He has often shared his favourite songs on his Instagram stories.

Taking to his Instagram stories, Vicky dropped a video while traveling out in the city and flaunting his moves on Diljit Dosanjh’s Champagne song. The URI star was looking handsome in a checkered shirt and cap. He had a cool pair of shades on. Vicky was seen enjoying himself in the car while lip-syncing to the new and peppy Punjabi number. Sharing the video, Vicky called it ‘Bliss’.

Talking about Sam Bahadur, it is being directed by Meghna Gulzar. The film is a biopic co-starring Sanya Malhotra and Fatima Sana Shaikh. A few months ago Vicky shared a photo of the film's script as well as some pictures on social media. He will be seen as Field Marshal Sam Manekshaw in the film. 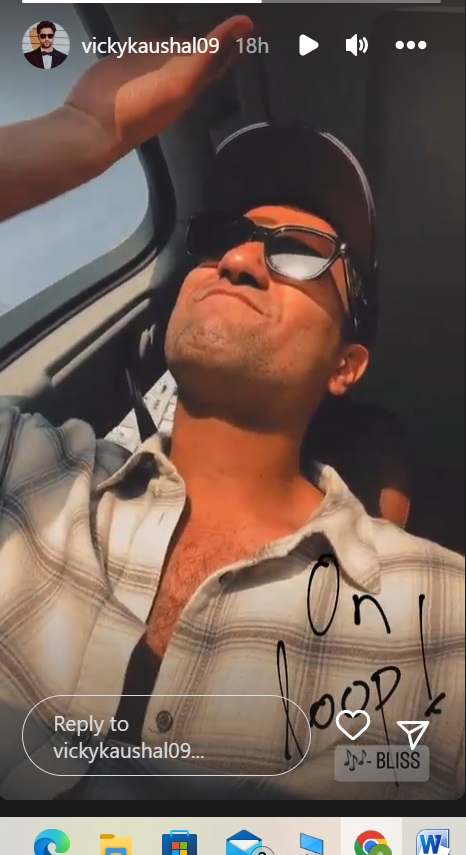 Pinkvilla has reported that he will start shooting Aditya Dhar directed The Immortal Ashwatthama co-starring Samantha Ruth Prabhu next year. The film was in news for a long time. This will be his second collaboration with director Aditya Dhar after Uri. Vicky has three films lined up for release – Govinda Naam Mera, Great Indian Family, and Laxman Utekar’s next.