Vikram Gokhale passed away today. His treatment was going on at the Deenanath Mangeshkar Hospital in Pune. A file image of Vikram Gokhale

Veteran actor Vikram Gokhale has passed away today. The actor was undergoing treatment at Pune’s Deenanath Mangeshkar Hospital. The hospital authorities had informed on November 25 that his health was improving slowly. Today the news was confirmed, celebs including Akshay Kumar, Anupam Kher, and many more took to social media and expressed their condolences to the family members.

Abhishek Bachchan wrote, “Very sad to hear of the passing of Vikram Gokhle ji. A wonderful actor. Remember as a kid watching him work with my father in Agneepath and Khuda Gawah and loving his portrayal of Rajput Khan! My condolences to his family and his fans.” Anil Kapoor also shared a picture on his Instagram stories.  Akshay Kumar, who worked with Vikram Gokhale in Bhool Bhulaiyaa and Mission Mangal, got emotional as he penned a note on social media. He wrote, “Very sad to know of the demise of Vikram Gokhale ji. Worked with him in films like Bhool Bhulaiyaa, Mission Mangal, had so much to learn from him. Om Shanti.” Anupam Kher shared an incomplete poem written by Vikram Gokhale and also shared heartbroken emojis to express his pain after losing his dear friend. “I got this incomplete video from #VikramGokhale 12days back. I called him & told him that the poem is incomplete. He laughed & replied,“Life incomplete है मेरे दोस्त!” News of his death has deeply saddened me. He was a very dear friend! BRILLIANT actor & person!," the Uunchai actor had earlier tweeted while sharing the poem.” 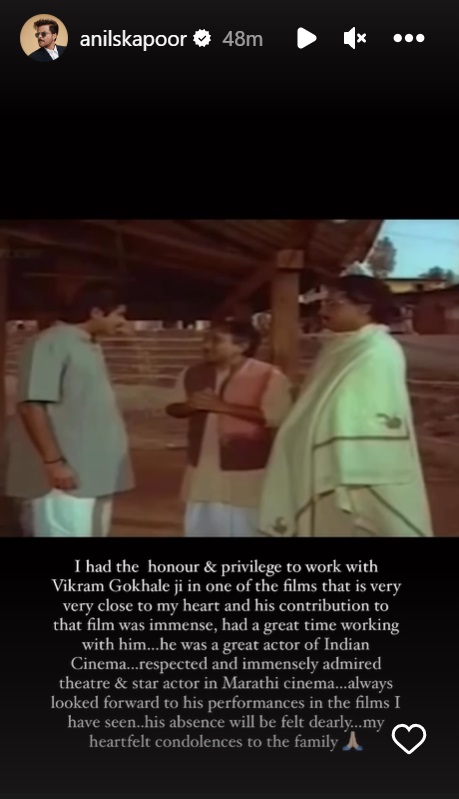 Work:
Vikram Gokhale was a celebrated Marathi and Hindi actor who has did amazing work for films and television. The actor played the role of Aishwarya Rai Bachchan’s father in the film Hum Dil De Chuke Sanam. Other popular films of his include Mission Mangal, Bhool Bhulaiyaa, De Dana Dan, Nikamma and Dil Se among others.