Also known as ‘The Conglomerate’, Song Joong Ki and Lee Sung Min pose as the main characters for the drama. On October 18th, the production team of JTBC's Friday-Saturday drama 'Reborn Rich' released the first main poster of the drama, which overwhelms the eyes with its unrivaled charisma. The aura of Song Joong Ki and Lee Sung Min, two men, makes us look forward to the hot war they will wage.

'Reborn Rich' is a fantasy regression drama about a secretary Yoon Hyun Woo (Song Joong Ki) who manages the owner risk of the family of a conglomerate, and returns to the youngest son of a chaebol family, Jin Do Joon (Song Joong Ki). Intricate mysteries and conspiracies unfolding in the turbulent 80s, unimaginable succession battles and character play herald the birth of a different level of regression.

The first main poster released contains the appearance of two men of the purebred family, Jin Do Joon and Jin Yang Cheol (Lee Sung Min), who hide their secret intentions, raising curiosity. The faces of the two people looking at the same place flash a different cool desire that resembles them. The present Jin Do Joon is a person who returned to Yoon Hyun Woo, who was once abandoned by the purebred family. His eyes, which hide his desire for revenge, are even more meaningful. 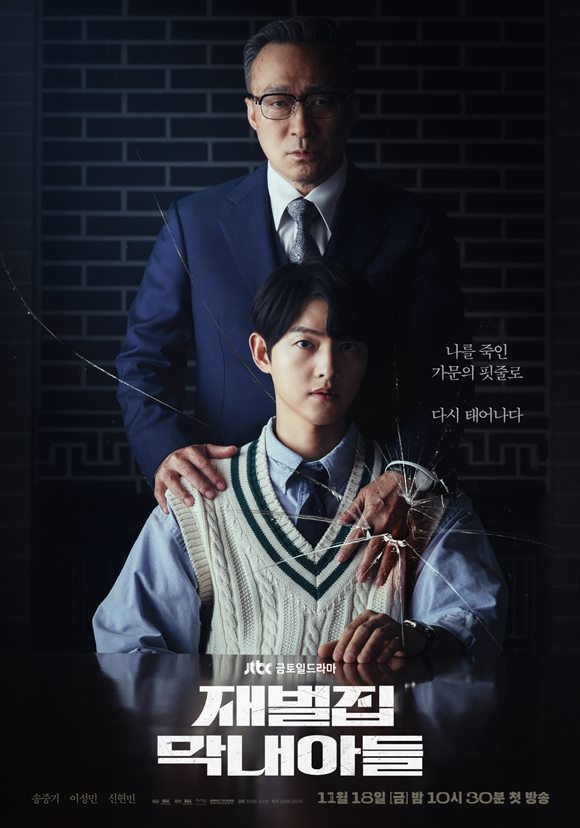 It is also interesting to see Jin Yang Cheol looking at Jin Do Joon's heart where blood stains are spreading. Jin Yang Cheol seems to shake his life at any moment. What is the meaning of the crack that started there? Meanwhile, the phrase 'I am reborn through the blood of the family that killed me' suggests their bitter relationship. The war that started before they were even born, attention is focused on the fierce battle they will draw.

When will the drama be released:

JTBC's new Friday-Saturday drama 'Reborn Rich' will premiere on November 18 at 10:30 PM KST, and will meet with viewers 3 times a week.

ALSO READ: BTS’ Jin to collaborate with Coldplay or Taylor Swift for the upcoming solo single? Find Out