Akkineni's: Nagarjuna on his way to The Ghost pre-release with sons Naga Chaitanya and Akhil Akkineni

Nagarjuna, Naga Chaitanya, Akhil Akkineni, and Sonal Chauhan pose in the flight as they head for the pre-release event of The Ghost.

Akkineni's: Nagarjuna on his way to The Ghost pre-release with sons Naga Chaitanya and Akhil Akkineni Nagarjuna and Sonal Chauhan will grace the silver screens as cops in the highly-discussed action entertainer, The Ghost. Today, as the makers have organized the pre-release event of the film, Naga Chaitanya and Akhil Akkineni decided to accompany their dad, Nagarjuna to the event. Recently, the Agent star posted a picture on social media, posing with brother Naga Chaitanya, dad Nagarjuna, and Sonal Chauhan on the flight as they head for the pre-release. The post was captioned, "The Ghost Time...Kurnool".

The Ghost is slated to hit the big screens on October 5th this year, during Dussehra. For those who do not know, Nagarjuna and Sonal Chauhan will be seen as Interpol officers in the movie. Going by the preview, the former is on a mission to save his sister, played by Gul Panag, and niece, played by Anikha Surendran from the gangsters. His subordinate Sonal Chouhan assists him in the task. 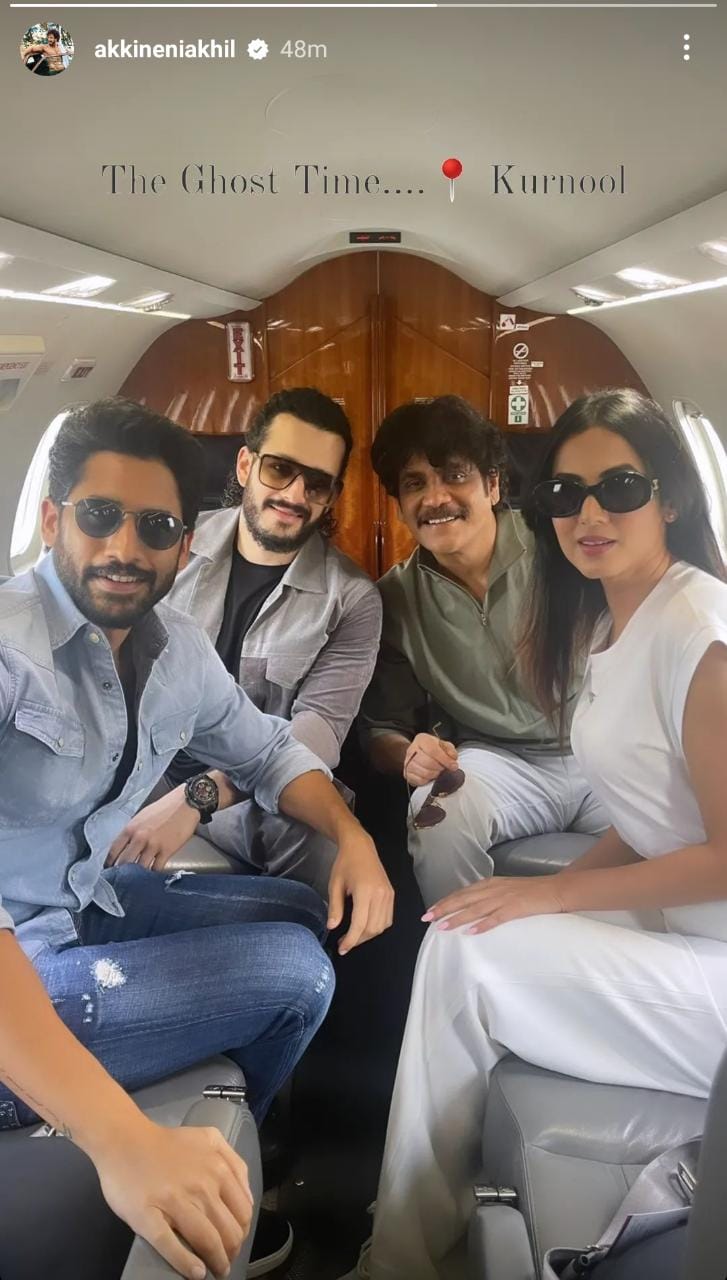 Backed by Suniel Narang, in collaboration with Puskur Ram Mohan Rao, and Sharrath Marar under the banners of Sree Venkateshwara Cinemas LLP and Northstar Entertainment, Bharath and Saurab duo has composed the songs for The Ghost, while Mukesh G is the cinematographers for the movie. Meanwhile, Dinesh Subbarayan and Kaecha have choreographed the high-octane action stunts for the drama. Dharmendra Kakarala is the head of the editing department of the film.

Over and above this, Nagarjuna is also hosting the 6th season of the popular reality show, Bigg Boss Telugu. This is his 4th consecutive year as part of the show.