GodFather: 12 Tweets you need to read before booking tickets for Chiranjeevi starrer Today is nothing short of a festival for the fans of Megastar Chiranjeevi as his political thriller GodFather has finally released in the cinema halls. The movie buffs have lined up outside ticket counters to witness the primary show of the action entertainer. Not just that, they even shared their opinion on the Telugu remake of Mohanlal starrer Lucifer on Twitter. Before you book your tickets for the next show of GodFather, let's see what they have to say.

One of the cinephiles tweeted, "Good first half. Chiru and Satya light up the screen with lots of drama. It’s more engaging compared to Lucifer. Thaman’s BGM.The role suited Chiru a lot as he plays his age & he was FAB. MohanRaja did a great job with nativity and changes. Great to see no deviations #GodFather." Another movie buff penned on the micro-blogging site, "Excellent second half too... Best outing after Boss re-entry.. Every scene is elevated and worked… Thank you sir @jayam_mohanraja. @MusicThaman next level Bgm  Dasara namade Next Sankranti namade #GodFather 4/5." 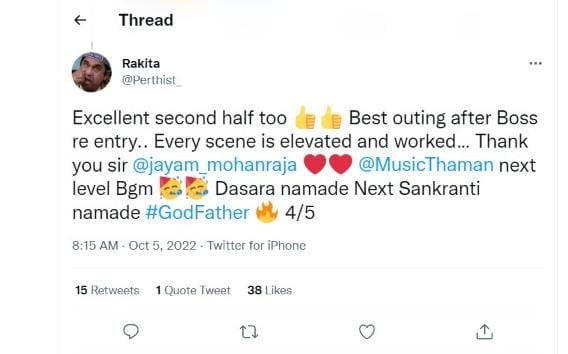 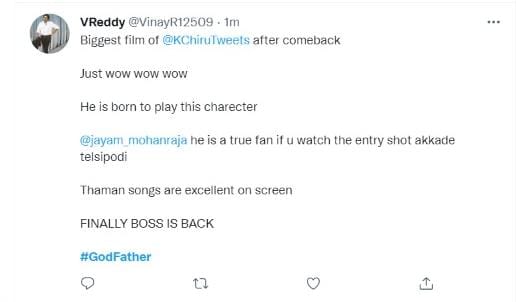 Given the tremendous initial response to GodFather, it is only natural that the fans look forward to the second installment of the movie. Earlier, speaking at the Hindi Trailer launch of the film, Chiranjeevi hinted at GodFather 2, "I was talking to Prithviraj Sukumaran, the original director and he said that L2 is coming very well. If you are interested, hear the subject. So possibilities are there to make GodFather."

GodFather talks about the life of a mass leader Brahma, played by Chiranjeevi, whose return to his hometown after 2 decades changes the dynamics of the city.