The 80th Golden Globe Awards are currently being held in Los Angeles. It is a proud moment for India as SS Rajamouli’s film RRR has won Best Original Song for Naatu Naatu at the Golden Globes 2023! The song has been composed by veteran music director MM Keeravaani, while it has been penned by Kala Bhairavi and Rahul Sipligunj. MM Keeravani accepted the award at the ceremony. The Twitter handle of RRR movie has shared videos and pictures from the Golden Globes award ceremony. A video shows the entire team of RRR celebrating as the award for Naatu Naatu is announced. RRR is being represented at the Golden Globes by SS Rajamouli, Jr NTR, and Ram Charan, who is accompanied by his wife Upasana Kamineni.

One of the tweets by RRR movie Twitter handle reads, “ INDIAAAAAAAA…. THIS IS THE BEST NEWS to WAKE UP TO!! #NaatuNaatu becomes the first ever Asian song to win a #GoldenGlobes . #RRRMovie.” AR Rahman, megastar Chiranjeevi, Nagarjuna Akkineni, Shankar Mahadevan, Ram Gopal Varma, and others congratulated team RRR for the historic win! Alia Bhatt also reacted to Naatu Naatu winning the Golden Globe Awards.

Megastar Chiranjeevi tweeted, “What a Phenomenal, Historic Achievement !!!! Golden Globes Best Original Song - Motion Picture Award to @mmkeeravaani garu !! Take a Bow! Heartiest Congratulations Team @RRRMovie&@ssrajamouli !! India is proud of you! #NaatuNaatu.” Meanwhile, Nagarjuna Akkineni wrote, "Congratulations to @mmkeeravaani garu and his team on winning the #GoldenGlobes2023 for #NatuNatu song in #RRR on the way to the oscars now." AR Rahman called it a ‘paradigm shift’ as he congratulated the team of RRR. He wrote, “Incredible ..Paradigm shift Congrats Keeravani Garu from all Indians and your fans! Congrats@ssrajamouli Garu and the whole RRR team!”

Alia Bhatt, who also starred in RRR, took to her Instagram stories to celebrate the big win of RRR song Naatu Naatu at the Golden Globes 2023. Sharing a video of the RRR team rejoicing as the award is announced, Alia Bhatt dropped several heart emojis and wrote, "Naatu Naatu RRR." Check out her story below. 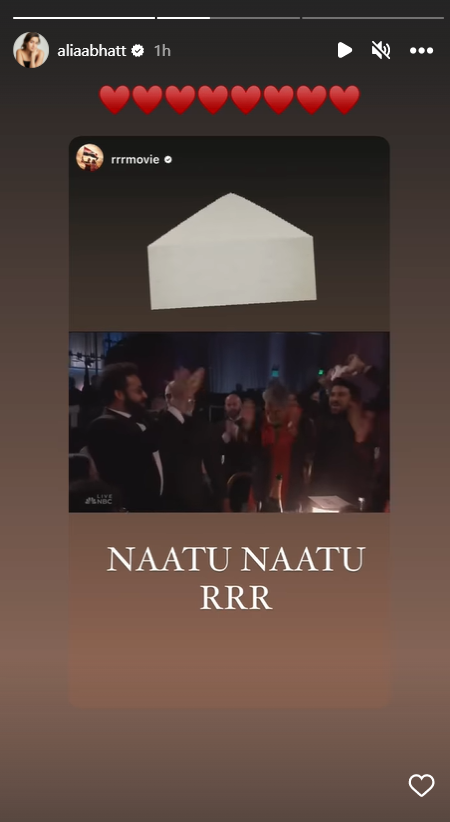 RRR also competed in a second category, and was nominated for the Best Non-English Language film at the Golden Globe Awards 2023. SS Rajamouli’s film competed against  Germany’s All Quiet on the Western Front, Argentina’s Argentina 1985, Belgium’s Close, and South Korea’s Decision to Leave. However, RRR failed to bag the Golden Globe in this category, and lost out to Argentina 1985, a historical drama film produced and directed by Santiago Mitre.

Anonymous
Jan 12, 2023
Why was AB not mentioned in the acceptance speech? She played the pivotal role which no South Indian actress could have played lol
0 REPLY