We bring to you the top news from the world of South cinema today on 6th November, take a look. The South film fraternity keeps movie buffs excited with its daily dose of updates. Today on November 6 as well, a lot of buzz was created in the world of South cinema. From Mani Ratnam collaborating with Kamal Haasan to sneak peeks of Jr NTR starrer NTR30's pre-production work to Dhanush's Vaathi's 1st single, to the grand launch of Naga Shaurya's NS24, a lot took place in just one day.

RRR actor Jr NTR will is all set to grace the silver screens with director Koratala Siva's untitled drama. Titled NTR30 for now, the pre-production work of the highly-discussed film is going on right now in full force. Today, a few snippets from one of the productive sessions made it to social media. The photos feature director Koratala Siva, DOP Rathnavelu, and Production Designer Sabu Cyril indulging in some deep discussion. It is further believed that the shoot for the movie will commence shortly.

Kamal Haasan announces his next with Mani Ratnam

Two of the biggest gems of Indian cinema, Mani Ratnam and Kamal Haasan have teamed up for a new venture after 35 years. These two last worked together in the 1987 classic Nayakan. The big announcement was made a day before Kamal Haasan's birthday. Sharing the news on Twitter, the Vikram star wrote, "Here we go again! #KH234." He even shared a picture with the celebrated director.

Meanwhile, sharing his excitement about the new project, Kamal Haasan was quoted saying, "I was equally excited 35 years before when I was about to start work with Mr. Mani Ratnam. Collaborating with a similar mindset is stimulating. This stimulation includes AR Rahman as well. Eagerly looking forward to present this venture with Mr. Udhayanidhi Stalin."

Alia Bhatt and Ranbir Kapoor have become proud parents to a baby girl today. After tying the knot in April this year, the power couple announced their first pregnancy in June. Sharing the exciting news with the fans, the new mommy in town shared a picture of a Lion, a lioness, and their cub on her Instagram, along with the caption, "And in the best news of our lives:- Our baby is here..and what a magical girl she is. We are officially bursting with love -blessed and obsessed PARENTS!!!!!! love love love Alia and Ranbir". Congratulating the new parents, superstar Mahesh Babu penned on the photo-sharing app, "Daughters are indeed special! Congratulations @aliabhatt & Ranbir!" Other celebs from all across the film industry also congratulated the happy couple. 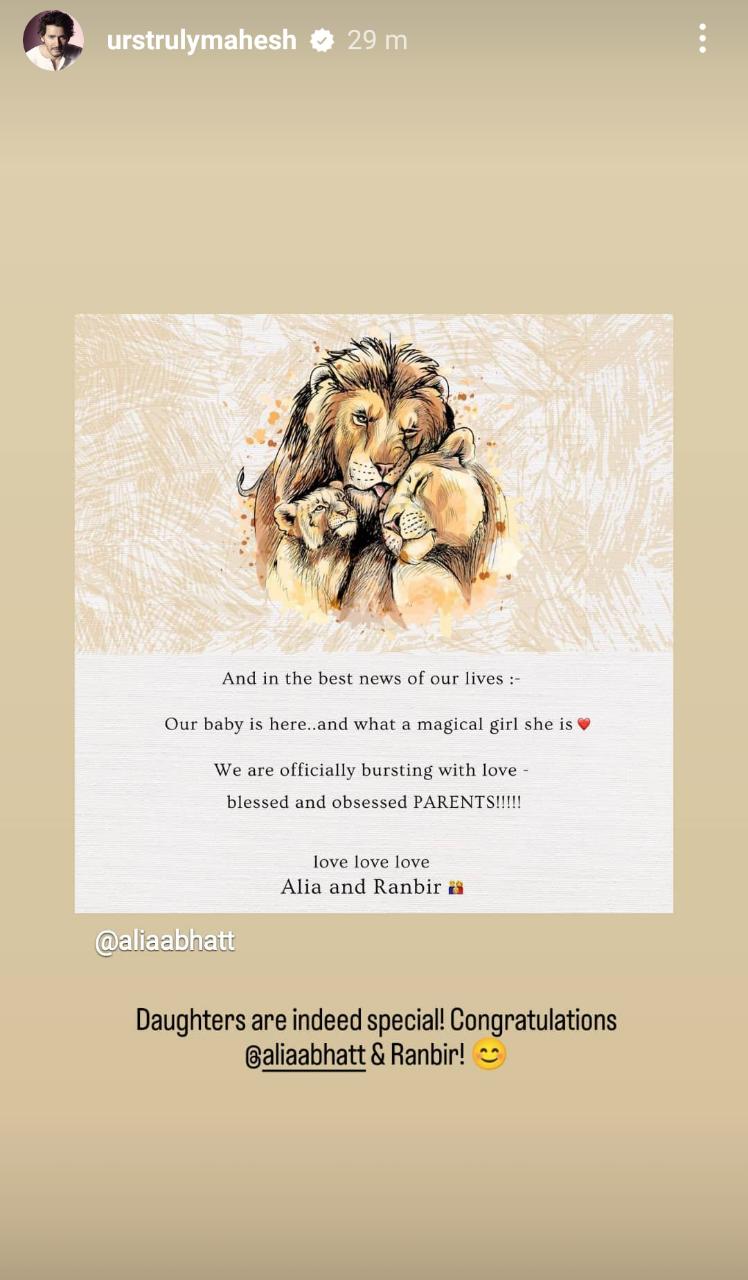 Dhanush has a promising lineup with some thrilling projects. One of his forthcoming movies is the Telugu-Tamil bilingual drama SIR/Vaathi. Helmed by directed Venky Atluri, the venture has already managed to create a lot of buzz among movie buffs. Adding to the hype, the first single from the highly-anticipated film is scheduled to be out on 10th November this year. Sharing the news, the makers Tweeted, "Get ready for a musical delight. The first single from #Vaathi #SIRMovie is all set to release on November 10th. A @gvprakash musical." The announcement poster shows Dhanush and Samyuktha Menon lovingly gazing into each other's eyes. Renowned composer GV Prakash Kumar has provided the music for Vaathi.

Bankrolled by production banner Sithara Entertainments in association with Fortune Four Cinemas, Dinesh Krishnan is a part of the team as the cinematographer, along with the Award Winning editor Navin Nooli. Aside from Dhanush and Samyuktha Menon, Sai Kumar, Tanikella Bharani, and Narra Srinivas are also essaying supporting roles in the movie, along with others.

Naga Shaurya’s 24th venture will be made under the direction of the first-time director SS Arunachalam. The film was launched majestically today in the presence of some special guests. While Director VV Vinayak sounded the clapboard for the muhurat shot, Abhishek Agarwal switched on the camera. Additionally, the first shot was directed by Thirumala Kishore, and Neuro hospital's Samba Shiva Reddy and GSK infra tech's Santosh Kumar handed over the script to the makers.

Backed by Srinivasa Rao Chintalapudi, Vijay Kumar Chintalapudi, and Dr. Ashok Kumar Chintalapudi under the production house Vaishnavi Films banner, Baby Advaitha and Bhavishya will present the movie. Touted to be an action entertainer, the drama is likely to feature Naga Shaurya in a refreshing role.

One of the most versatile actors in today's time, Kamal Haasan will be celebrating his 68th birthday tomorrow on 7th November. It seems like the pre-birthday festivities have already commenced for the Vikram actor. A special episode was arranged to commemorate the occasion, and the actor's caravan was themed with balloons. In a glimpse from the festivities, the actor can be seen channelizing his inner child as he plays with balloons decorated around him.

Here were the top headlines from the South cinema today on 6th November, stay tuned for more.

Dhanush flaunts his ‘Captain Miller’ look at the V...