Check out reactions of the Twitterati after watching the early shows of Mani Ratnam's Ponniyin Selvan. Mani Ratnam's highly-anticipated magnum opus Ponniyin Selvan has released in the theatres today on 30th September. After watching the first show of the historical drama in the cinema halls, the movie buffs shared Ponniyin Selvan reviews on social media. A Twitter user penned on the site, "Thoroughly enjoyed the movie. MR perfectly justified the storyline and did the best he could for this massive story.. not easy...Huge respect for the entire cast and crew for this effort to initiate and made this happen."

Another user wrote on the micro-blogging site, "#PonniyinSelvan blockbuster Being a person who have not read d book or tried to know wat d story was before watching and i Enjoyed it. Super work by #ManiRatnam Tis is going to b d Next big thing from Kollywood in terms of collections..." The movie is off to a great start and now, time will tell if it is able to keep its momentum going in the coming days. 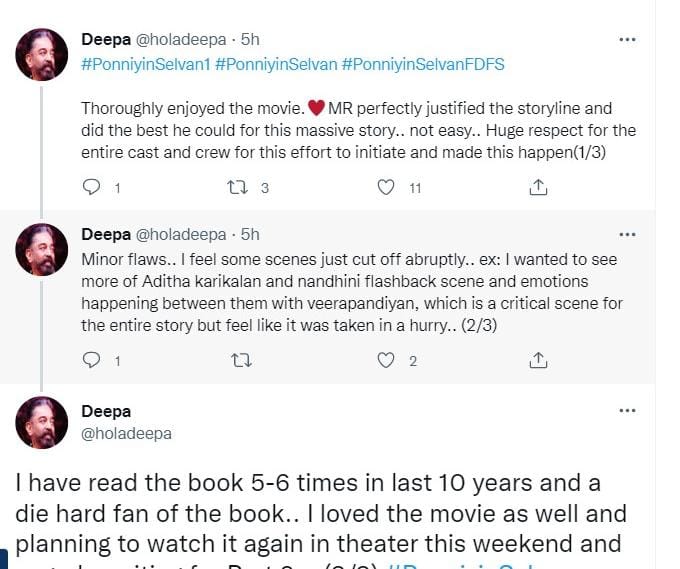 The project has been in the limelight since day one due to its ensemble cast including Aishwarya Rai Bachchan, Vikram, Karthi, Trisha and Jayam Ravi in key roles, along with Sarathkumar, Prabhu, Lal, Kishore, Ashwin Kakumanu and Aishwarya Lekshmi in secondary roles, among others.

It might be exciting to know that although Ponniyin Selvan has been made available to the audience today, the film was in discussion for around 3 decades. Mani Ratnam tried to make the film earlier not once but twice. His first attempt was back in 1994 and then he again started discussing the venture in 2011. However, both times, the project failed to take off.