Hombale Films, the makers of mega successful films KGF 2 and Kantara, has announced a 3000-Crore investment in the South Indian film industry, in the next five years. Hombale Films is set to make a grand comeback with Salaar, after the massive successes of KGF franchise and Kantara.

The South Indian film industry is currently on the top of its game with back-to-back mega blockbusters and content-driven films. Kannada Film Industry made a powerful comeback to the mainstream last year by presenting two of the biggest blockbusters in Indian cinema, KGF: Chapter 2 and Kantara. The Yash starrer, and Rishab Shetty project, which hit the theatres in 2022, pushed the commercial boundaries of both the Kannada industry and Indian cinema with extraordinary success. Both the films were bankrolled by Hombale Films, and the banner is now set to make a comeback with their maiden Telugu project, Salaar.

Vijay Kiragandur, the co-founder of Hombale Films recently released an official statement on his official social media handles, which unveiled a highly exciting update. The prestigious banner has announced that it is set to invest Rs. 3000 Crores in the entertainment industry, in the next 5 years. "Cinema entertainment has been there since time immemorial and it has been viewed, lived and appreciated by everyone. Whether good times or bad, it has been a huge medium of relief and joy. It has also been a strong carrier of our culture, tradition and history through which we have been showcasing our identity to the world at large," wrote the producer in his statement.

"As we embark into the new year, we promise to produce compelling content with an immersive experience that can have a lasting memory and can leave an indelible impression upon you. With this interest in mind, we pledge to invest Rs 3,000 crore in the coming five years for a sustainable growth in the entertainment sector.," he concluded.

Check out the official statement of Hombale Films, below: 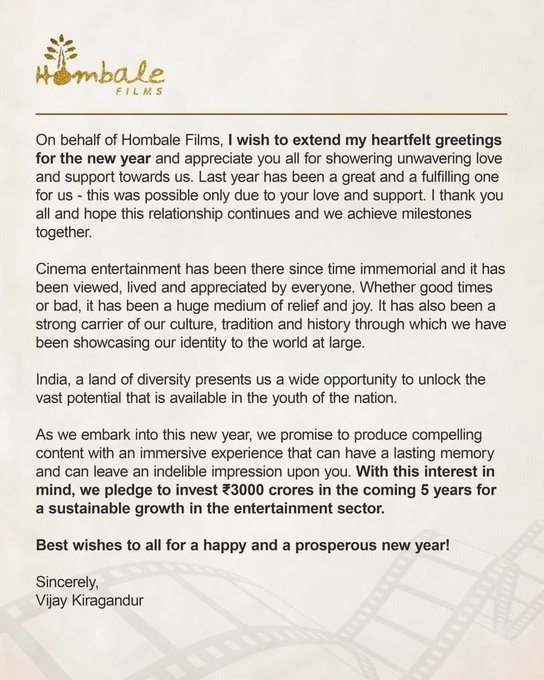 Now, let us have a look at the 5 upcoming projects bankrolled by Hombale Films in the South Indian languages...

The prestigious banner is reuniting with Prashanth Neel, the director of the KGF franchise for Salaar, which marks both the filmmaker and the banner's debut in the Telugu film industry. Salaar, which features Telugu superstar Prabhas in the lead role, is undoubtedly one of the most anticipated projects of Indian cinema right now. Some unconfirmed reports suggest that the big-budget venture is a spin-off of the KGF franchise, and will have many characters from the universe set by the Yash starrer, reprising their respective roles in it. Prithviraj Sukumaran, the multi-faceted talent of Malayalam cinema, is appearing in a pivotal role in the film, which is set to release in September 2023.

Vijay Kiragandur recently confirmed that Kantara is getting a sequel, to the much excitement of cine-goers. The producer confirmed that the Hombale team will associate with Rishab Shetty once again, and the collaboration will be mostly for Kantara 2. He has also promised that the official announcement will be out very soon.

Hombale Films is venturing into Malayalam cinema with Tyson, the upcoming political thriller directed by Prithviraj Sukumaran. The director himself appears in the lead role in the film, which will feature another popular star of South cinema as another protagonist. Tyson, which is slated to release in five languages, is expected to go on floors by the second half of 2023.

If the reports are to be believed, Hombale Films has come on board to produce the highly anticipated second outing of the Soorarai Pottru duo, Suriya and director Sudha Kongara. The movie, which is rumoured to be based on the real-life story of a dreaded gangster, is expected to have its official launch very soon. In that case, the project will mark the banner's second outing in the Tamil film industry.

The banner is making its Tamil cinema debut with the social drama Raghu Thatha, headlined by the National award-winning actress Keerthy Suresh. The movie, which is helmed by Suman Kumar, was recently launched with a first-look poster. More details on the cast and crew of the project are expected to be revealed very soon.

ALSO READ: Varisu to Thunivu: 10 South movies to look forward to in 2023