Saakini Daakini Movie Review: This adaptation of an acclaimed Korean hit is engaging for the most part

Shalini and Damini start out by picking petty fights, their conventional equations give way to a semi-intense, innocent bonding as the story progresses.

Saakini Daakini Movie Review: This adaptation of an acclaimed Korean hit is engaging for the most part The film under review is an adaptation of the 2017 South Korean action-comedy 'Midnight Runners', where the protagonists were male. In the adaptation, the gender has been swapped. On the face of it, producer Sunitha Tati, one of the bankrollers of 'Saakini Daakini', is showing signs of unfurling something new by remaking six other Korean movies these days. Whether those slew of remakes (to be released in the next two years or so) will change the way Telugu/South Indian cinema views the creative dimensions of remaking foreign movies, is something only time is going to tell. For now, she and her fellow producer D Suresh Babu (whose Suresh Productions has the distinction of churning out some of the most content-driven movies over the decades) make a decent start.

Shalini (Nivetha Thomas) and Damini (Regina Cassandra) hail from two different economic and social backgrounds. If the former is from an upper-middle-class background whose parents are influential, the latter comes from a relatively humble family. They both join as trainees at a police academy led by a strict officer (Bhanu Chander) and otherwise populated by a bunch of jokers (played by Prudhviraj whose scenes with Shalini are fun to watch, Nellore Sudarshan who shows symptoms of kleptomania, RJ Hemanth who is a compulsive flirt and Raghu Babu who is conveniently buffoonic).

While Shalini and Damini start out by picking petty fights, their conventional equations give way to a semi-intense, innocent bonding as the story progresses. Somehow, this feels sudden, especially because it unfolds after some 30 minutes of plot stagnation. One night, on their way to the police academy after partying hard, they witness a teen girl getting abducted. The rookies now have to expertly navigate the incompetent, indifferent system to crack the racket and save the girl.

While the action-crime part takes off with a degree of freshness, the flavour becomes generic after the unfertilized egg harvesting racket angle is introduced. Also, the Shalini-Damini duo's amateur investigation is fraught with lucky, unrealistic, and simplistic coincidences, not to speak of accidental discoveries. 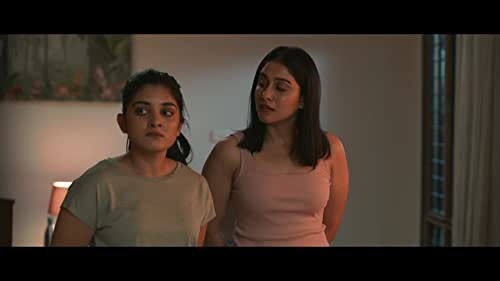 Comedian Satya is there to whip up a couple of double-meaning lines in the middle of serious scenes. But the action part is not about such digressions. It's about the girls becoming courageous heroines in the face of bureaucratic hurdles, a theme drawn from 'Midnight Runners' and highlighted by film aficionados when the Korean original was released.

Mikey McCleary's songs don't follow a template; the last montage song, set to an action block, is enjoyable. On the downside, the background score may not be basic but it doesn't add any heft to the proceedings. Viplav Nyshadam's editing is even and that is a probable reflection of the director's knack. Richard Prasad of 'Oh Baby' fame gets his act together as a cinematographer.