Samantha Ruth Prabhu sent in her wishes to her co-star and friend Varun Dhawan, on his wedding anniversary. The Yashoda actress commented, "happy anniversary" on Varun Dhawan's adorable post for his wife Natasha Dalal.

For the unversed, Samantha and Varun Dhawan teamed up for a Bollywood series Citadel. Helmed by Raj and DK, Citadel is the Indian adaptation of the International series which is originally created by the director duo, Russo Brothers. Ever since then, they have been sharing a great rapport. They often comment on each other's social media.

Samantha has started shooting for Citadel. According to our sources, it is a two-week long schedule and the makers are set to make an official announcement of Samantha being part of the Russo Brothers Indian spinoff of the fiction series, Citadel.

Recently, Varun Dhawan defended Samantha after an insensitive tweet about her health. He wrote: "U don't feel bad abt anything u just care about clickbait. Feel bad for u son. Also glow is available in Instagram filters. Just meet Sam trust me she was glowing."

On the other hand, Samantha is super excited for Pathaan. Yes, the actress took to her Instagram story and shared a poster of Shah Rukh Khan from Pathaan and expressed her excitement to watch the movie. She wrote, "It's Pathaan day."

Shah Rukh Khan, Deepika Padukone, and John Abraham's much-awaited film, Pathaan has finally arrived in theatres today. The excitement amongst the audience to watch Shah Rukh Khan on the big screen is unmatchable. The first-day first shows are jam-packed and even the reviews are quite overwhelming. The Siddharth Anand directorial is a part of YRF's spy universe. It also features Salman Khan's special appearance as Tiger. 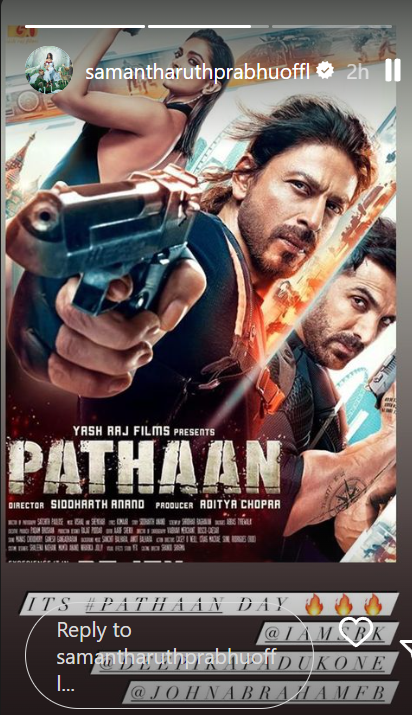 Meanwhile, Samantha Ruth Prabhu is gearing up for the release of her next film, Shaakuntalam. The film will hit the theatres on February 17. Based on Kalidasa's acclaimed Sanskrit play Abhijnana Shakuntalam, Shaakuntalam, also stars Dev Mohan. It is written and directed by award-winning director Gunasekhar.