Check out everything that happened in South cinema today, 20th November. The South film fraternity keeps movie buffs hooked with its daily dose of thrilling updates. Today on November 20 as well, the industry managed to create a buzz with interesting announcements. From Naga Shaurya getting hitched, Ram Charan heading to New Zealand to Matti Kusthi trailer and Waltair Veerayya's first single, take a look at the list below.

Top News of the Day!

Is Thalapathy 67 a part of Lokesh Kanagaraj’s cinematic universe?

After Varisu, Thalapathy Vijay will begin work on directed Lokesh Kanagaraj's Thalapathy 67. The filmmaker, Lokesh has created a cinematic universe with his previous films Kaithi and Vikram. Now, actor Narain, who was part of Kaithi and Vikram has hinted that Thalapathy 67 is going to be a part of LCU. However, the makers are yet to make an official announcement on the same. Tollywood actor Naga Shaurya got married to Bengaluru-based entrepreneur Anusha Shetty in a grand ceremony held in Bengaluru today. In the video, the newlyweds can be seen dressed in mesmerizing traditional attires. In addition to this, the pre-wedding festivities including the Mehendi, Haldi, and cocktail party also took place in Bengaluru yesterday, 19th November.

Ram Charan is off to New Zealand

Ram Charan is presently working on director S Shankar's RC15. The Acharya actor has travelled to New Zealand to shoot the latest schedule of the untitled film. Backed by Dil Raju and Sirish under the banner of Sri Venkateswara Creations, Kiara Advani, the leading lady of the film is also expected to join Ram Charan in New Zealand, along with the rest of the cast and crew. The film's cast further includes SJ Suryah, Anjali, Jayaram, Sunil, Srikanth, and Naveen Chandra in prominent roles, along with the rest.

Ravi Teja and Rana Daggubati recently launched the trailer of Vishnu Vishal starrer sports drama Matti Kusthi. Directed by Chella Ayyavu, the movie shows Vishnu Vishal as a kabaddi player who is looking for a submissive wife. Meanwhile, Aishwarya Lekshmi, an aggressive girl, comes into his life. As the two end up getting married, their constant ego clashes makes for an entertaining watch.

Now coming to the technical crew, Justin Prabhakaran has rendered the music for the movie, while Richard M Nathan is the cinematographer. Prasanna GK is the editor for the drama. Matti Kusti is slated for a worldwide theatrical release on 2nd December this year.

Waltair Veerayya first single to be out on November 23.

The primary track from Chiranjeevi's forthcoming drama Waltair Veerayya will be released on 23rd November this year. Titled Boss Party, Party Song Of The Year, the number has been scored by Rockstar Devi Sri Prasad and choreographed by Sekhar master. The announcement poster features the Megastar in his vintage mass avatar, bringing back the memories of Mutha Mestri.

With Mass Maharaja Ravi Teja in a mighty role, Shruti Haasan has been roped in as the leading lady opposite Chiranjeevi in the film. Billed to be a mass-action entertainer laced with all the commercial ingredients. Waltair Veerayya is slated to hit the silver screens by Sankranthi, 2023.

SS Rajamouli's period action drama RRR, starring Jr NTR and Ram Charan has impressed a lot of people across borders. Now, the latest addition to the admirer's list is Hollywood filmmaker JJ Abrams. The director known for movies like Star Wars, and Mission Impossible recently met Rajamouli and revealed that he is a huge fan of RRR.

The highly-anticipated teaser of the upcoming superhero drama Hanu-Man will be released tomorrow on 21st November at 12: 23 PM. Helmed by Prasanth Varma, the project stars s Teja Sajja as Hanumanthu, Amritha Aiyer as Meenakshi, Satish Kumar, and Raj Deepak Shetty. 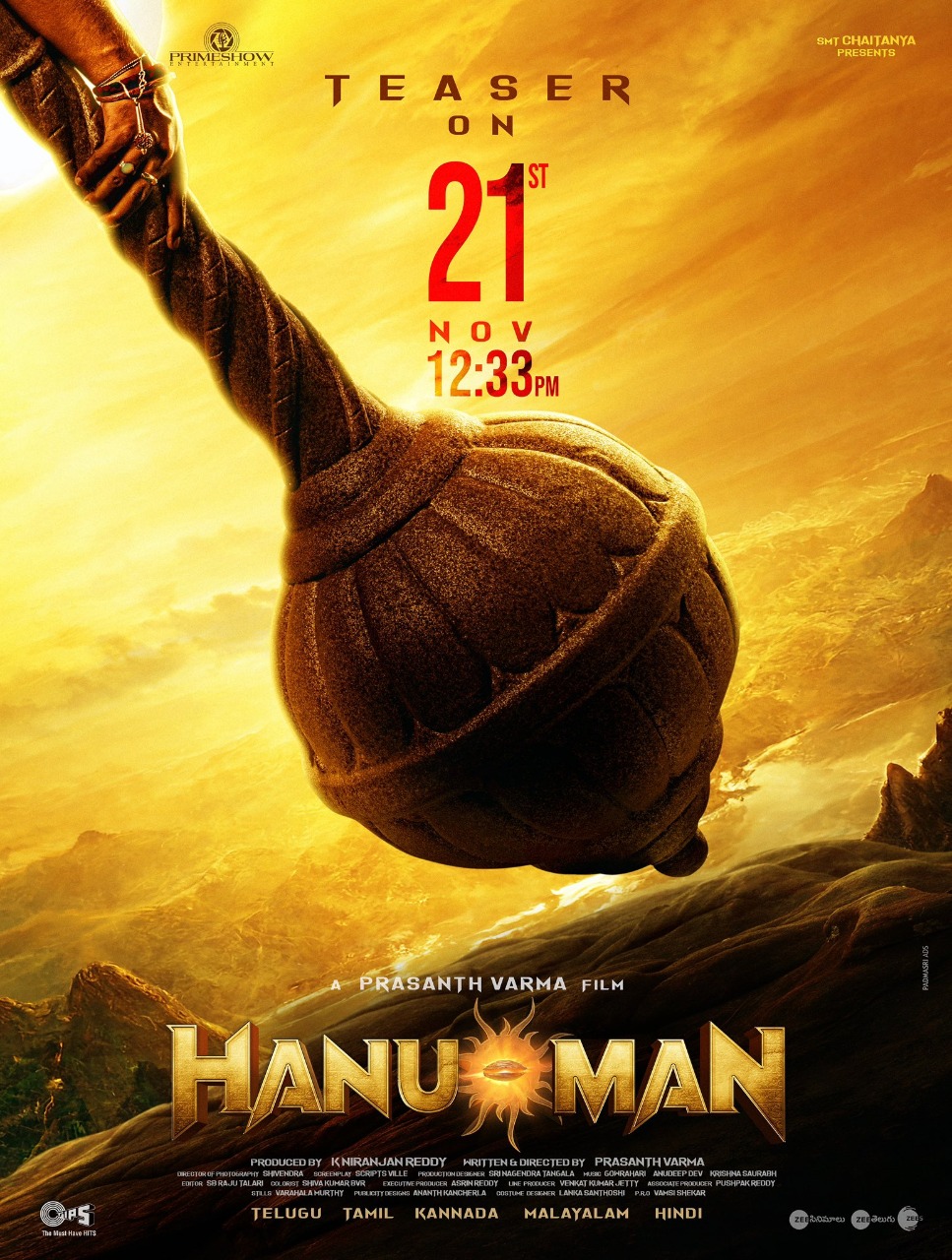 Music composer Anirudh Ravichander has commenced discussions with the filmmaker Koratala Siva for the music of Jr NTR starrer NTR30. Sharing a sneak peek of one of the discussions, the makers wrote on Twitter, "The music of #NTR30 begins. Director #KoratalaSiva and anirudh in discussion to bring out a blockbuster album." 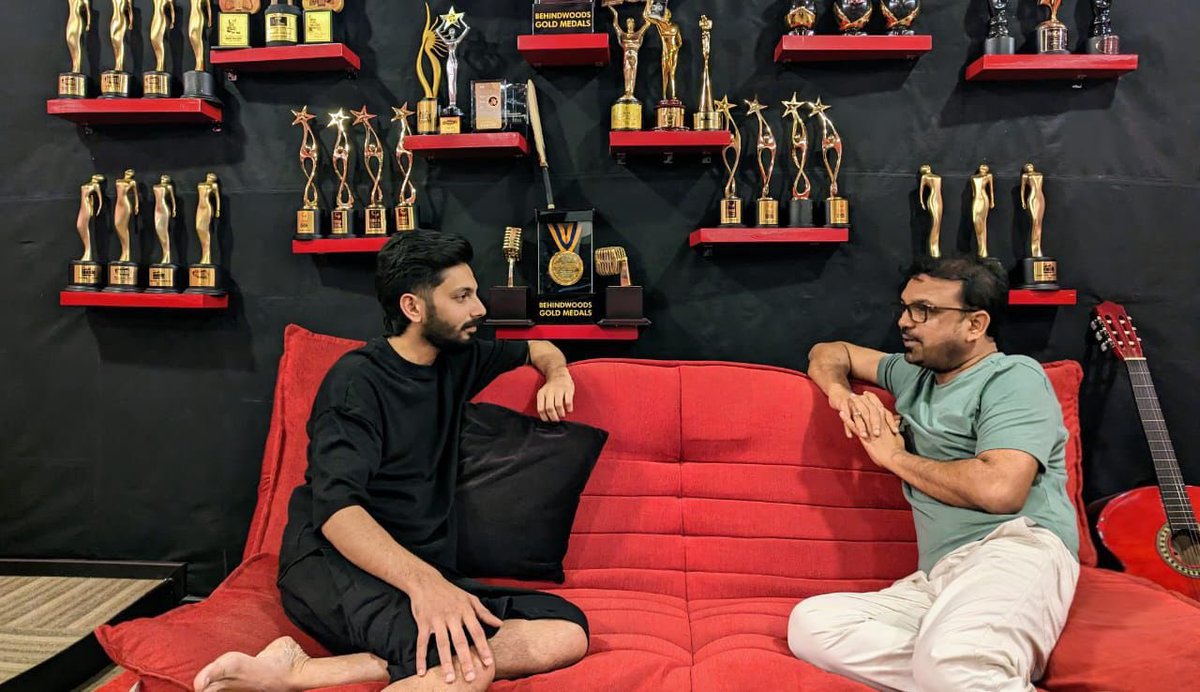