Wonder Women Movie Review: Films about female friendships are a rarity and even more so centered around middle-aged to-be mothers, that is where Anjali Menon’s new outing locates itself. Films about female friendships are a rarity and even more so centered around middle-aged to-be mothers, that is where Anjali Menon’s new outing locates itself. The camaraderie that blossoms between pregnant women in a pregnancy care facility is good enough dramatic turf for a kaleidoscopic vision of modern-day motherhood and the intricate complexities associated with the birth process that unfortunately evades the male gaze to date in storytelling. This bare-bones approach to its dramatic setup aids Anjali Menon in her fourth directorial Wonder Women. The setting is the narrative mechanism to bring women from varying social milieus and class hierarchies to assert the need for a sensitive exploration of the female psyche and the ways in which the prospect of being a mother, torpedoes their already marginalized identities and relationships.

What to expect from an Anjali Menon film?

Anjali Menon is a highly revered figure in modern Malayalam cinema known for her films like Usthad Hotel, Bangalore Days, Koode and to an extent in her ensemble debut Manjadikkuru. There is a sensitized, keenly crafted individuality to the way she handles her female heroes and their conflicts, often mirroring those of their male counterparts and acting as an impetus for the plot turns.

Similarly, like in Bangalore days and Ustad Hotel, you can see glimpses of reality, humans, so full of life and grace, ready to pop out of the screen, unlike the archaic female parts churned out. 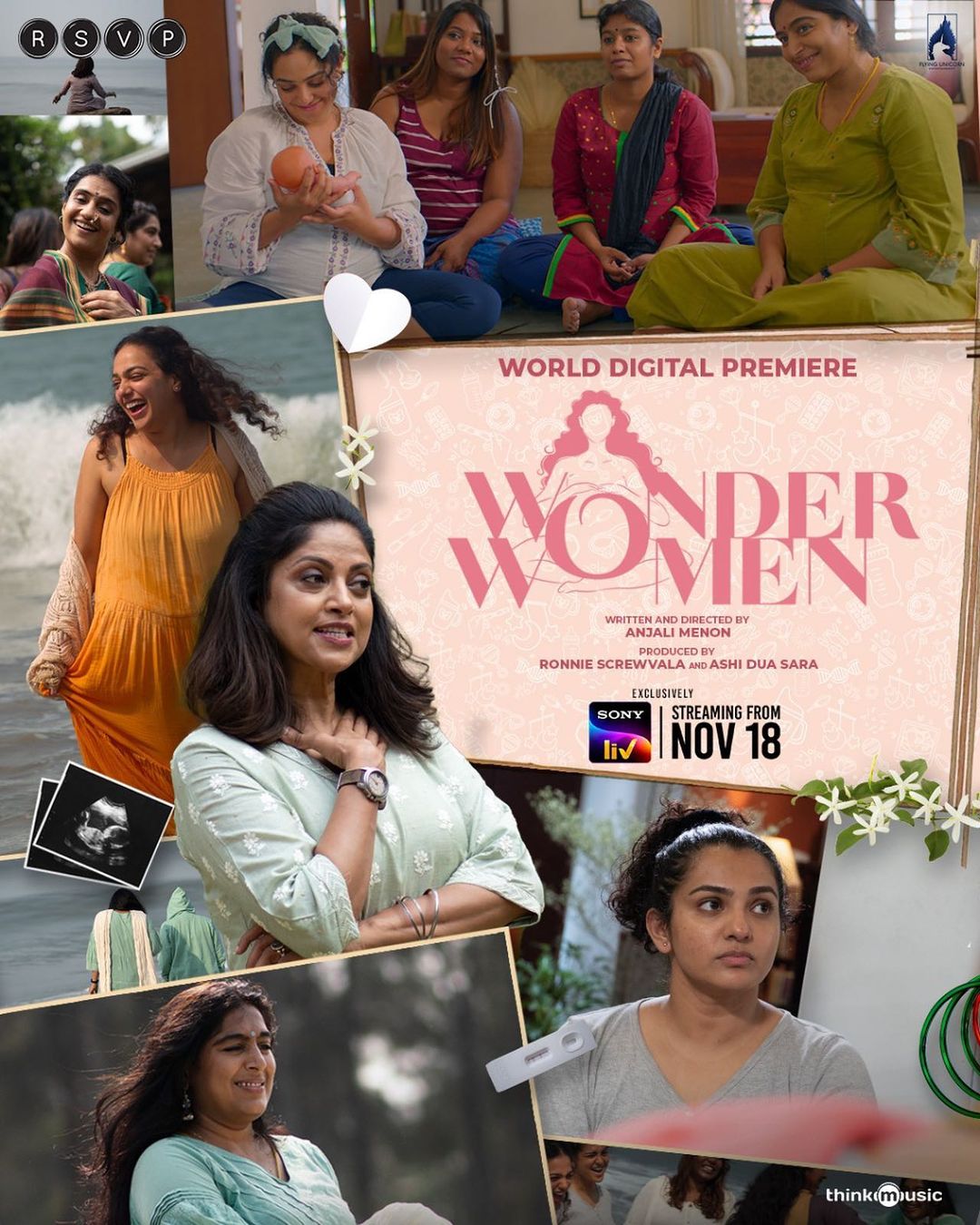 Ideas of empowerment and normalization.

However Wonder Women, her first all-female lead film, ironically feels like her weakest attempt to draw out a living, breathing woman with a story to tell and a coherent world to immerse them in. The film functions mostly as an inside peek into a series of therapy group sessions led by Nandita (Nadia Moidhu) and a newly joined bunch of pregnant mothers consisting of the affable chatterbox Nora (Nithya Menen), the free-spirited Veni (Padmapriya ) accompanied to her dismay by her rigidly mannered mother in law, the innately aloof outsider Mini (Parvathy Thiruvothu) who prefers to remain mostly in her own company, the uneducated north Indian housewife Jaya( Amruta Subhash), the self-proclaimed rebel, hipster Saya (Sayanora Philip) and the mostly silent observer mom (in for her second delivery) all come together to discover themselves, their resentment towards their spouses and the missteps in their personal journeys, fueled by the unexpected motherhood.

The film sets up the routine beats in a matter-of-fact way and Anjali’s freewheeling visual grammar keeps the momentum high involving the difficulty posed by the cold, distant ways of Mini (Parvathy) who feels like a person with a secret or two, least interested in exchanging pleasantries with others.

Where it all went downhill

The writing at times hits a stone wall when it comes to etching out all its principal players with individual scenes dedicated to each woman and their driving conflict in life. These scenes feel like done-to-death confrontational setups from umpteen past films, reduced in its visceral impact due to reduced running times. We get the exposition and background details of all these women in painfully dull rehashes of domestic dramas with moments of friendship and camaraderie played out in regular montages that add up to nothing dramatic in its progression but a mere placeholder of convenience.

The technical side and filmmaking work at places

The delicacy of her earlier films is sacrificed at the convenient dump of expository line readings that doubles down on the already redundant character traits and quirks that cease to matter after a point. We get drawn in no character in particular as the concerns and conflicts seem weighed down by fairly routine performances except for Parvathy, who seems to be the only one with something to chew on in terms of a piled up, obscure backstory and her performance sells the intensity of her predicament. Nithya Menen too gets a fairly one-note part that demands nothing from her than being a jovial urban girl with mommy issues (a tad too simplified). Padmapriya, Amrita and Archana get the most archetypical characters. Nadiya Moidhu too gets a sweet little revelation in her character design but that too turns up a bit late in the narrative.

This one feels a tad too simplified and basic

The music by Govind Vasantha constantly hustles between tonal contrasts of being too playful in the meetup; bonding scenes and a tad too melodramatic in the climatic portions but complements the mood in some places where the dialogues are aptly rendered with some life and rhythm. The camera by Manesh Madhavan is never docile to the wordy screenplay but finds ways to navigate the confined spaces and punctuate a visual consistency in his frames. The film however ends up being a material better suited for a talking heads documentary of real-life mothers or a make-belief one that would have been more aligned to Anjali’s sensitive and meticulous vision of motherhood but sadly as a piece of film, this group of women seem arranged mouth pieces chanting lines that mean very little within the aesthetics of a well-shot advertisement for pregnancy awareness.

Is Nithya Menen in a relationship with a popular M...