Pathaan is not just a name of a film but it is an emotion of thousands of fans who have been waiting with bated breaths to watch SRK on the silver screens. Pathaan is not just a name of a film but it is an emotion of thousands of fans who have been waiting with bated breaths to watch Shah Rukh Khan on the silver screens. Well, not many efforts need to be put in when it comes to spreading SRK’s charm amongst the audiences. And we bet you too must have been drooling over his chiseled body and packs ever since the first looks and posters have been released. Well, currently the first song from the movie, Besharam Rang has become the talk of the town. We have seen Deepika Padukone in a hot avatar even before but this song will see her in an all-new hot avatar. Scroll down to decode the sexy beach wear of Deepika and SRK and hear what stylist Shaleena Nathani has to say about belting jaw-dropping looks for the stars.

Ever seen a man in his late fifties look so hot? Well, we wouldn’t want to repeat the fact that Shah Rukh Khan is 57 and still managing to give young girls all the jitters with his looks. His green printed shirt with open buttons and a long chain, bun and black sunglasses are enough to make us drool over him. 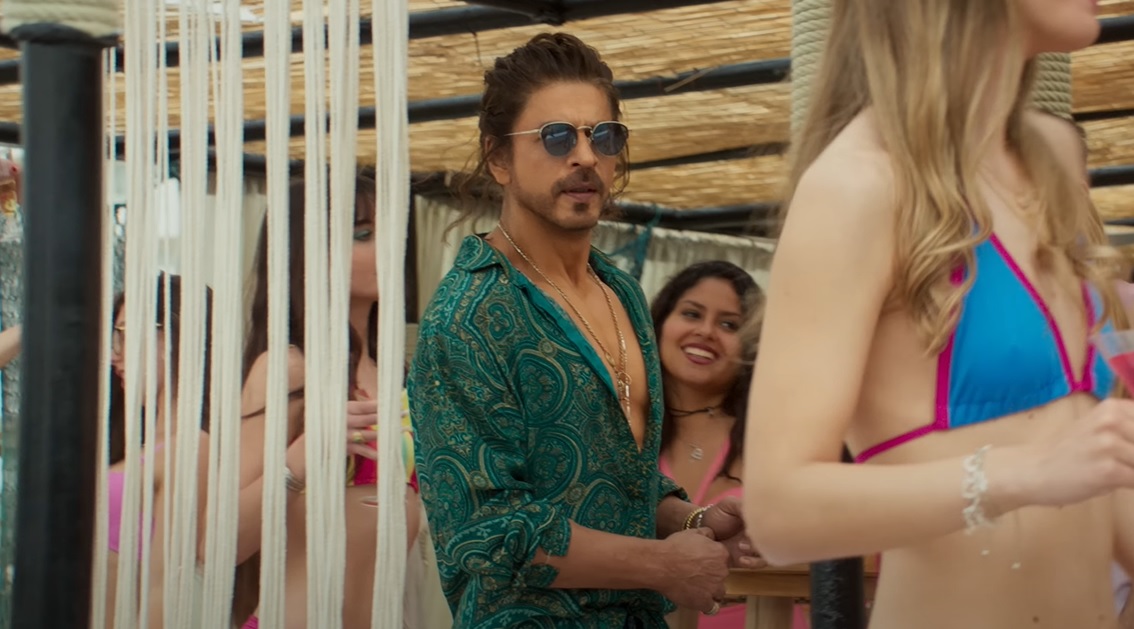 Looking so cute and handsome at the same time should be a punishable crime. Shah Rukh Khan killing us with those dimples in this sheer white shirt look is just priceless.

It cannot get hotter than this. Shah Rukh Khan and his six packs are the perfect beach look.

Shaleeni Nathani adds, “for Shah Rukh, we’ve been able to do a little anti-fit, cool shirt and gave him a lot of accessories. He is presented as a guy who throws his clothes on together but in a very sexy way, like making it look like we’ve unbuttoned his shirt. The attitude with which he has worn his clothes is very chill and easy.”

Deepika Padukone flaunts her perfect curves and sets the pool on fire with her swag walk in this yellow monokini. The monokini has a cut on the tummy and is attached from the top with the help of a ring making it look stylish. 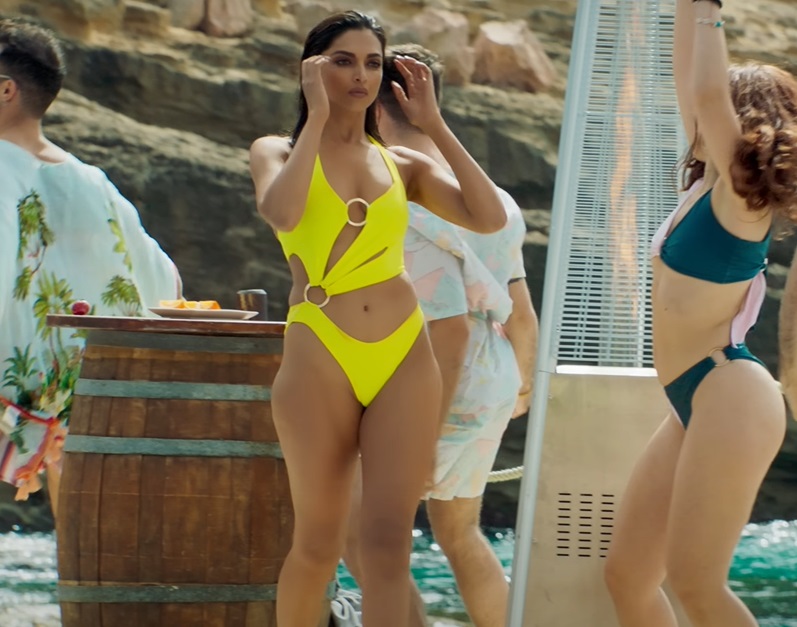 The slay queen is surely setting the internet on fire with her golden monokini that she layered with a printed sheer shirt. 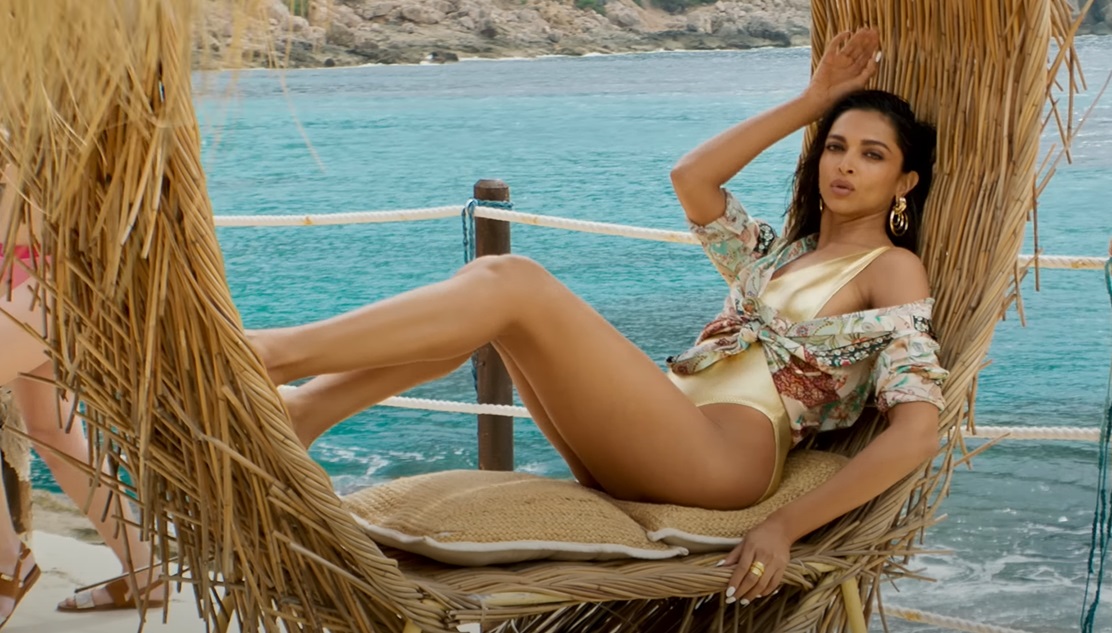 The purple loses fitted sequined bralette paired with an aqua blue and greenish short sarong is just a cherry on the cake for this very hot song. 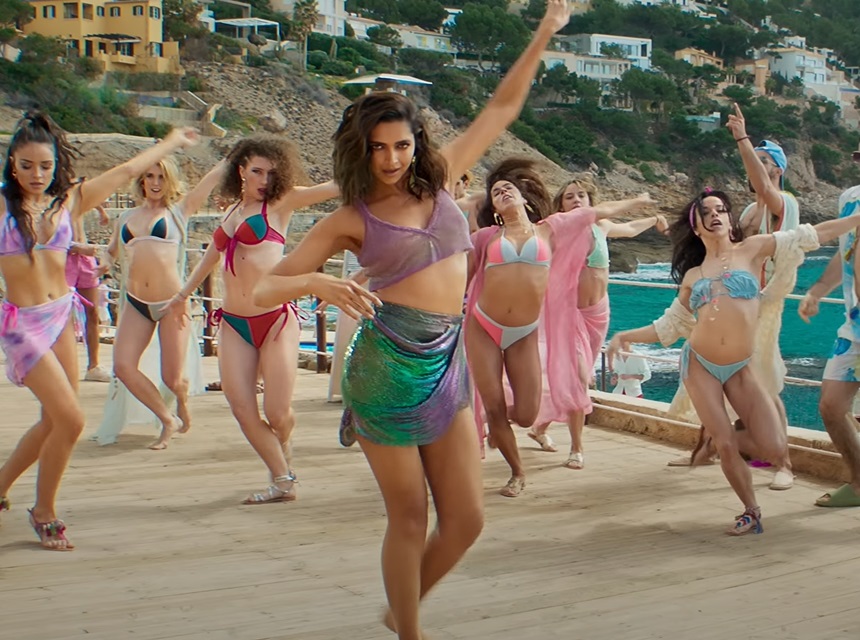 Shaleena further adds, “I was also eager to make this song look like nothing you’ve ever seen before. I wanted the clothes to be very different from what you would see in a song like this. Even the swimsuits she is wearing, colors we’ve used. I wanted to do something which hopefully will be relevant for a long time.”

Shaleena says the song is looking this hot because she also had SRK and Deepika’s magnetic personalities to carry off these clothes! She says, “I also could not have asked for two better actors to dress because there are no two people who carry clothes off better than they do. We did not approach it as a dance number, but what’s great is that we looked at it as a mood where two people would be wearing clothes as they stepped out to go for a party. All this was incorporated in the song which was really nice for me so the clothes were still real that a girl or a guy can wear on a normal basis. So it was a bit of elevated casual fashion for me.”

Anonymous
Jan 16, 2023
They are both looking great. And yes, the camera does not zoom at her navel in a sari in the rain. She looks likea person, not a piece of flesh.
0 REPLY

Anonymous
Dec 15, 2022
sooo much of hard work to make those dress loook that smoooth and sleeek nice one
0 REPLY

Anonymous
Dec 14, 2022
What are you smoking Shaleena? That golden monokini was done better for Dostana some 15 years ago.
0 REPLY

Anonymous
Dec 14, 2022
Song is peppy and catchy both deepi and shah look really good but wardrobe could be better to much skin show
0 REPLY
View more (10) comments