Ankita Lokhande praises Mouni Roy's performance in Brahmastra; Says 'It was fantastic and up to the mark'

Mouni Roy essayed the antagonist in Brahmastra and the name of her character is Junoon. Ankita Lokhande praises Mouni Roy's performance in Brahmastra; Says 'It was fantastic and up to the mark'

Mouni Roy is receiving immense love and compliments for her powerful performance in the recently released blockbuster 'Brahmastra'. The actress played an antagonist in the film and the name of her character is Junoon. Her friends from the television industry and fans are praising her performance and are proud of her for bagging this huge opportunity. Recently, Arjun Bijlani, Sriti Jha and Drashti Dhami also shared posts on social as they appreciated Mouni.

Today, popular actress Ankita Lokhande also shared a post on her social media handles praising Mouni's performance in Brahmastra. The actress shared Mouni's poster from the film on her Instagram story and wrote, "Dear Mouni watched brahmastra yesterday and ur performance was fantastic and absolutely up to the mark. u made us proud. Keep it up and keep growing Lots and lots love and success you." Mouni too reposted the story and wrote, "Thank you so so much Ankita. Lots of love back." 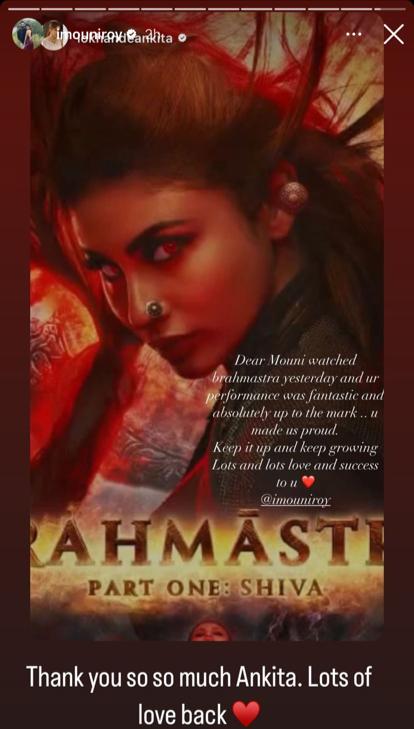 Mouni's husband Suraj Nambiar and many of her friends including Arjun Bijlani, Remo Dsouza, and others met and watched Brahmastra together and even sported customised T-shirts with her character Junoon's print on them to hype her up.

Mouni Roy gained a lot of recognition and proved her acting prowess in shows like Kasturi, Devon Ke Dev...Mahadev and Naagin, to name a few. She has also participated in reality shows like Nach Baliye 6, Jhalak Dikhhla Jaa 7, and Zara Nachke Dikha. Now, she is seen spreading her magic on the big screens by starring in Brahmastra.

Produced by Star Studios, Dharma Productions, Prime Focus, and Starlight Pictures the magnum opus Brahmāstra Part One: Shiva released theatrically on September 9th, 2022, in Hindi, Tamil, Telugu, Kannada, and Malayalam. The movie shattered records on its opening day as it became the highest non-holiday day 1 grosser for a Bollywood film in nett terms.