Mahira Sharma gets ‘P’ drawn in her mehndi on Karwa Chauth. Mahira Sharma gets ‘P’ drawn in her mehndi on Karwa Chauth

Bigg Boss 13 contestants Paras Chhabra and Mahira Sharma formed a special bond inside the house. Their chemistry was quite evident when they met inside the house. Paras Chhabra has been the constant support of the actress and even after coming out of the house, the duo have been together. They often go on trips together and also share pictures with each other. The duo have not declared their relationship officially, but Mahira Sharma hinted towards a relationship as she got the letter P drawn on her mehandi.

In the recent post shared by the Kundali Bhagya actress, she was seen having a gala time with show lead Shraddha Arya. Mahira was seen in a maroon and golden work lehenga set and Shraddha Arya looked beautiful in a yellow gota work lehenga. They are seen singing and dancing together and singing punjabi songs. They also had food together after applying the mehendi. 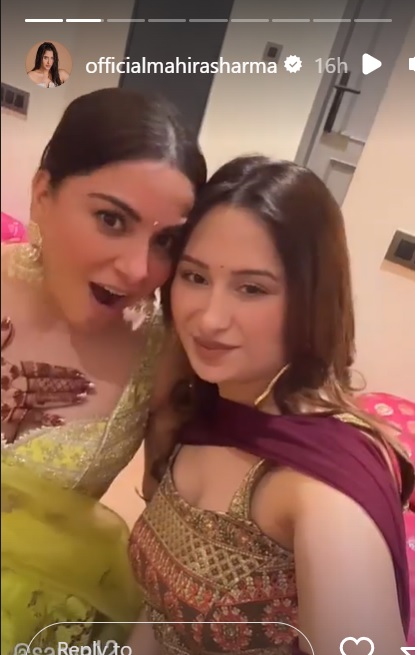 Talking about her relationship status, Paras has told Etimes, “Right now we are focusing on ourselves. We want to achieve so much more. Yes maybe someday we will become like Deepika Padukone-Ranveer Singh or Priyanka Chopra- Nick Jonas,” shares Paras. Mahira shared, “Why give a tag to something? We are fine like this. We don’t know what will happen in the future but right now we are happy.” They also shared about being possessive for one another, like if someone stares at her in the gym, he would start working out next to her. Mahira adds that when they go out, she stands beside him to convey that he is taken.

Also read- Mahira Sharma says if she ever thinks of a partner Paras Chhabra fits the bill: He's become part of her family

When Paras Chhabra went the Ranbir Kapoor way and ...

Paras Chhabra & Mahira Sharma enact a scene from B...

EXCLUSIVE: Paras Chhabra on twitter war with Jay B...

Bigg Boss 13 fame Mahira Sharma REVEALS she was in...