In the last episode of Bigg Boss 16, Shalin Bhanot removed Gautam Singh Vig from the captaincy run and passed a sexist comment about Gautam making celebs and fans furious. Bigg Boss 16 is getting more intense day by day, and the high-octane drama, fights and arguments have kept the audiences hooked on the show. Recently, the contestants competed in the captaincy task, which gave rise to a lot of disagreements among the contestants. During the captaincy task, Shalin Bhanot removed Gautam Singh Vig from the captaincy run and passed a derogatory comment which left the fans and celebs disappointed, and they slammed him on social media.

In the last Bigg Boss 16 episode, the contestants competed in the captaincy task and were asked to take 3 names of the contestant who they do not want to see as the captain. Shalin Bhanot took Gautam Singh Vig, Priyanka Chahar Choudhary and Soundarya Sharma's names and eliminated them from the captaincy run. While doing this Shalin stated his reason for removing Gautam from captaincy tasks and called Gautam "aurat". He added that because Gautam is a woman, he is weak and should not compete in the race for captaincy. Shalin Bhanot's sexist remark has disappointed many celebs and fans, who took to social media to express their rage. One of them who lashed out at Shalin for his derogatory comment was Bigg Boss 7 winner Gauahar Khan.

Gauahar has always been vocal about her opinions and called out every contestant, who has been doing wrong throughout the season. For the unversed, Gauahar first slammed Shiv Thakare for passing a personal remark on Archana Gautam and provoking her. She then called out MC Stan for making derogatory remarks about Priyanka Chahar Choudhary.

Another Bigg Boss 7 contestant who slammed Shalin Bhanot was Kushal Tandon. Kushal took to his Twitter handle to call out Shalin for his remark and wrote, "A guy who can’t own his 10 year old son …. Talking about morals irony."

Rajiv Adatia and KKhushi Jaain (Gautam Singh Vig's best friend) also called out Shalin Bhanot and slammed him for his comment. Rajiv took to his Twitter handle and wrote, "They way Shalin Said to Gautam “Khamzor Aurat”seriously not done! Any by the way Aurat kabhi Kamzor nai hoti!They are stronger then all of us men put together!They carry a child for 9 months men couldn’t even imagine! They are the most strongest in every way!".

Sharing Rajiv's tweet screenshot on her Instagram story, Khushi wrote, "You really need some lessons on moral values, calling women a weak gender shows your pathetic mentality, but what do you expect from a so called man who suggested his fellow contestant to play sympathy card (using her pets death)". 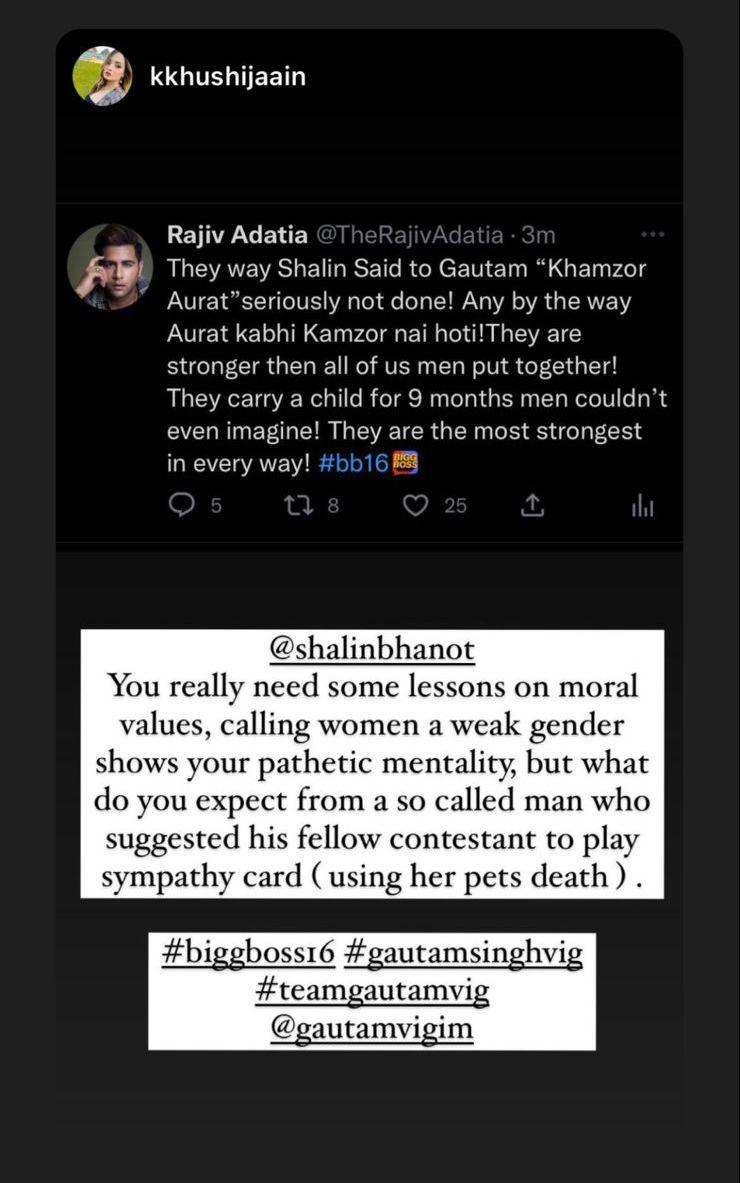 After the last captaincy task, now the house captain is Sajid Khan. The evicted contestants of Bigg Boss 16 are Sreejita De, Manya Singh and Gori Nagori. Salman Khan hosted Bigg Boss 16 airs from Monday to Friday at 10 PM and every Saturday and Sunday at 9:30 PM.

Bigg Boss 16, POLL: Is something brewing between N...