Hina Khan poses with boyfriend Rocky Jaiswal in an UNSEEN mushy PIC; He says 'This Girl, My Life' Hina Khan poses with boyfriend Rocky Jaiswal in an UNSEEN mushy PIC; He says 'This Girl, My Life'

Hina Khan is one of the most talented actresses in the entertainment industry and enjoys a massive fan following owing to her talent and style statement. She rose to fame from her debut show Yeh Rishta Kya Kehlata Hai and her role ‘Akshara’ is still fresh in the minds of viewers. Speaking about her personal life, the actress is dating Rocky Jaiswal for quite a few years now. Hina often shares adorable and cute videos with her main man on social media and fans love them.

Hina is also close to Rocky's family and often celebrates festivals and occasions with her. Today, Rocky Jaiswal shared a new picture on her Instagram story with his ladylove Hina Khan. In this photo, we see Hina and Rocky twinning in white and looking cute as they strike a pose together. Sharing this photo, Rocky added, 'This Girl, My Life'. 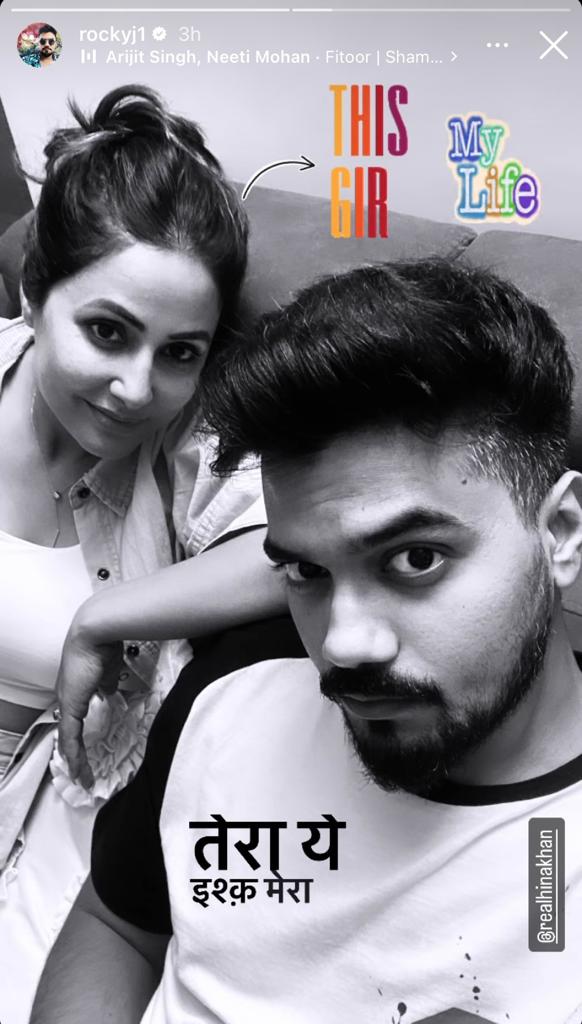 For the unversed, Hina attended the Cannes film festival 2022 to unveil the poster of her upcoming movie, Country of Blind. Before attending the Cannes Film Festival, Hina had made a stop at the UK Asian Film Festival. At this event, Hina was awarded the prestigious award of 'Trailblazer of the Year' for her film Lines.

On the professional front, Hina rose to stardom after portraying Akshara in the popular daily soap Yeh Rishta Kya Kehlata Hai. She was also a contestant in Season 11 of Bigg Boss, which was hosted by Salman Khan and in which she came in second place. At present, the diva is not appearing in any television shows but apart from that she has been doing music videos, endorsing brands, and making heads turn by walking on the ramp for some popular fashion designers. She recently made a guest appearance on Mika Singh's reality show 'Swayamvar: Mika Di Vohti'.

Also Read: PICS: Hina Khan looks royal in an organza saree and cape, says 'Every saree has a beautiful story' Hina Khan shares surreal PICS from her trip to Egy... Hina Khan is a sight to behold in THESE pictures f... Hina Khan looks gorgeous in a blush pink attire an... Hina Khan says ‘Life goes on’ as she shares a VIDE... Hina Khan dazzles in violet sharara as she poses w...