After getting evicted from Jhalak Dikhhla Jaa season 10, former contestants Nia Sharma and Niti Taylor share their experience of being a part of this show. Jhalak Dikhhla Jaa season 10 is one of the most popular and star-studded shows and is all set to draw its curtain with the finale being around the corner. This show's ‘Blockbuster semi-finale weekend’ witnessed the shocking double elimination of Nia Sharma and Niti Taylor. Both contestants shared an incredible journey on the show and spared no effort to evade elimination. However, after a gripping and intense competition, judges Karan Johar, Madhuri Dixit Nene, and Nora Fatehi announced that four contestants including Nishant Bhat, Nia Sharma, Niti Taylor, and Faisal Shaikh were at the bottom as per the tally of the audience’s votes. Having received the least number of votes, Nia stood eliminated.

The utter shock came when yet another elimination was revealed. Owing to a tie in the votes among the remaining three contestants and considering there was no elimination in the previous week, the judges announced Niti Taylor’s elimination based on the scores she earned last week.

Nia Sharma shares her experience of being a part of Jhalak Dikhhla Jaa 10:

Nia Sharma had a momentous dance journey replete with breathtaking acts and action-packed dance forms on the show. At the outset, Nia confessed that she was anxious about performing on a platform like ‘Jhalak Dikhhla Jaa’ and that she would give her sweat and blood to all her performances. Nia came a long way with her fun and competitive spirit which was appreciated by the judges and celebrity guests who graced the show.

Talking about her tryst with the show Nia Sharma says, “Firstly, I want to thank all the judges, the team of ‘Jhalak Dikhhla Jaa 10’, the COLORS team, choreographers, and contestants for making my dance journey so special. I’m grateful to have had a loving audience that showed their unwavering support. When I look back on my stint on the show, I’m proud and happy to have overcome challenges that seemed insurmountable. I’m a much better dancer now than I was at the beginning of this show. I owe this progress to my choreographer Tarun Nihalani, who invested a lot of energy in ensuring that I looked the way I did on stage. I'm carrying all the love and memories with me.”

The actress also took to her Instagram handle and penned a heartfelt note for her fans. 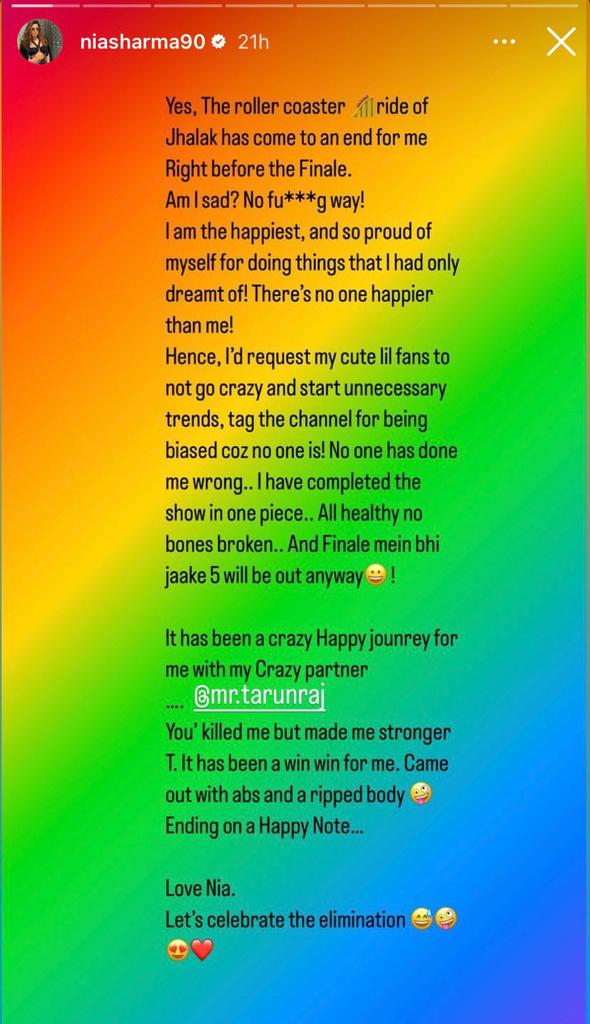 Niti Taylor talks about her journey on Jhalak Dikhhla Jaa 10 :

The second eliminated contestant of the weekend, Niti Taylor bagged quite a few standing ovations for her stupendous and heartfelt performances throughout this season. Despite failures and injuries, she pushed her limits and impressed the judges and the viewers with her courage. She was lauded for the meticulous work she did on her dance moves on the show. In last weekend’s episode, she shared her inspiring story of fulfilling the dream to dance after recovering from a hole in her heart as a kid. She earned everyone’s respect for being a braveheart.

Talking about her journey Niti shares, “I never expected the double elimination twist and I’m sad that I’m not part of the dance battle on Jhalak Dikhhla Jaa 10 anymore. Hitting the stage of this show was a dream come true for me. Along my journey, I had many creatively fulfilling experiences and I will always cherish them.  The lessons I’ve learned on the show have helped me discover a new side of myself. I would like to thank all my well-wishers, the judges, and my choreographer partner Akash Thapa for believing in me.”