The Kapil Sharma Show, known as one of the most popular reality shows on Television, has been graced by all the top-notch celebrities from the industry to promote their films. Kapil Sharma and his team leave no stone unturned to entertain the masses with their hilarious acts. This weekend the show will be graced by Kajol, who will promote her upcoming film Salaam Venky.

Today, Kapil Sharma took to his Instagram handle and dropped a few pictures with Kajol. In these photos, the comedian is seen decked in a purple hoodie, whereas the actress looks gorgeous in a white floral printed blazer. Both are all smiles as they pose together for a selfie. Sharing these snaps, Kapil wrote, "Everyone’s favorite @kajol best wishes for #salaamvenky mam." The comedian re-posted the post on his Instagram story and wrote, "With my all time favorite."

Sharing the same post on her Instagram handle, Kajol wrote, "Mine too @kapilsharma you make so many people laugh and smile. Its a gift." 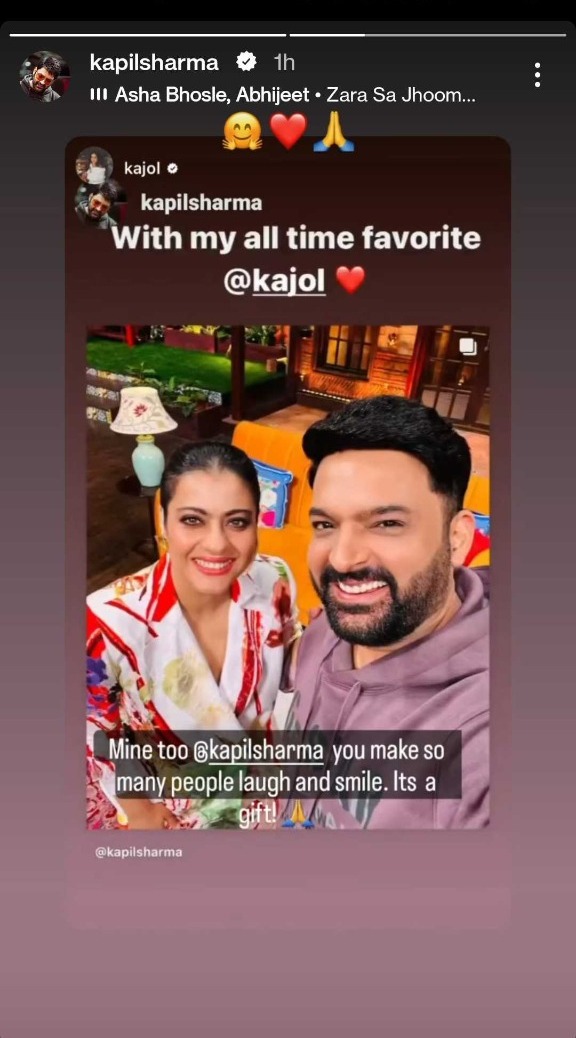 Salaam Venky is one of the most anticipated films, directed by Revathy. The film stars Kajol, Vishal Jethwa, Rahul Bose, Aahana Kumra, and Rajeev Khandelwal in play pivotal roles. The story revolves around Kajol aka Sujatha, a mother looking after her differently-abled son, played by Vishal. Sujatha can be seen battling the most difficult circumstances with a smile for her son, whom she loves unconditionally.

The film is backed by Suraj Singh and Shraddha Agrawal through their banners, Blive Productions, and RTake Studios. Salaam Venky is slated to release in theatres on 9th December 2022.

Led by Kapil Sharma, The Kapil Sharma Show features Kiku Sharda, Sumona Chakravarti, Srishti Rode, Gaurav Dubey, Ishtiyak Khan, Sidharth Sagar, and Srikant G Maski playing unique characters to tickle the bones of the masses. Archana Puran Singh is seated as the guest judge and is equally entertaining as the other teammates. The Kapil Sharma Show premiered on 10th September and airs every Saturday and Sunday at 9:30 PM on Sony TV.