Mouni Roy shared beautiful clicks of herself on Instagram on Sunday, December 4. The images are a perfect treat for us this weekend. Mouni Roy is leaving no stone unturned as the actress keeps her fans always hooked with engaging pictures. She is highly active on social media and enjoys more than two million followers on Instagram. Recently, on Sunday, December 4, she posted glammed-up clicks of herself. The ‘Dil Galti Kar Baitha Hai’ song dancer was last seen in Ranbir Kapoor and Alia Bhatt’s Brahmastra.

To make your weekend more happening, Mouni Roy shared a bunch of pictures on Instagram. In all of the clicks, she can be seen sporting different outfits. Her latest post is proof that she can slay any look, and dress like a pro. She captioned the post, “Always in my lane, minding my own business.” 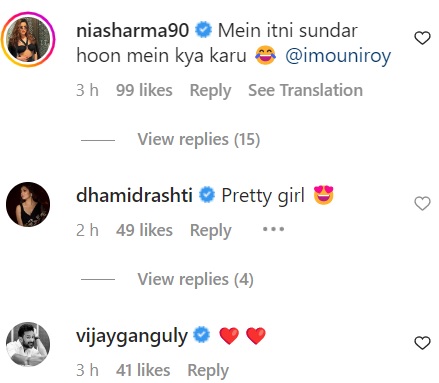 In 2006, Mouni made her acting debut with Kyunki Saas Bhi Kabhi Bahu Thi. She received wider recognition and fame for her role in the TV series Naagin. She has participated in reality shows like Zara Nachke Dikha and Jhalak Dikhhla Jaa 7. Apart from the small screen, she made her film debut with Hero Hitler in Love and her Hindi film debut with Akshay Kumar-starrer Gold.

Mouni Roy finds it difficult to lose after 'shaadi...