Shivangi Joshi is one of the finest actors in the television industry who is known for her class acting and multi-talent. The actress gained a massive fan following after she played the character of Naira in the daily soap, Yeh Rishta Kya Kehlata Hai. However, after her track in the show came to an end, she was then roped in for the iconic socio-drama series, Balika Vadhu's second season. Besides this, the actress is also quite active on social media and often keeps her fans updated about her whereabouts. Recently, Shivangi welcomed a brand new something in her family and we are so happy for her.

Taking to her Instagram handle, Shivangi shared the news with her fans that she is now the owner of a brand new Mercedes Benz car. In her first story, she shared a video of a screen that read ‘Dear Ms Shivangi Joshi, Welcome to the world of Mercedes Benz.’ In her next story, the actress shared a glimpse of her new car which was fully covered in a cloth and decorated with some balloons. Well, it looks like Shivangi is a car lover as she already owns two swanky cars- Audi Q7 and Jaquar XE. Here are the glimpses of her new car: 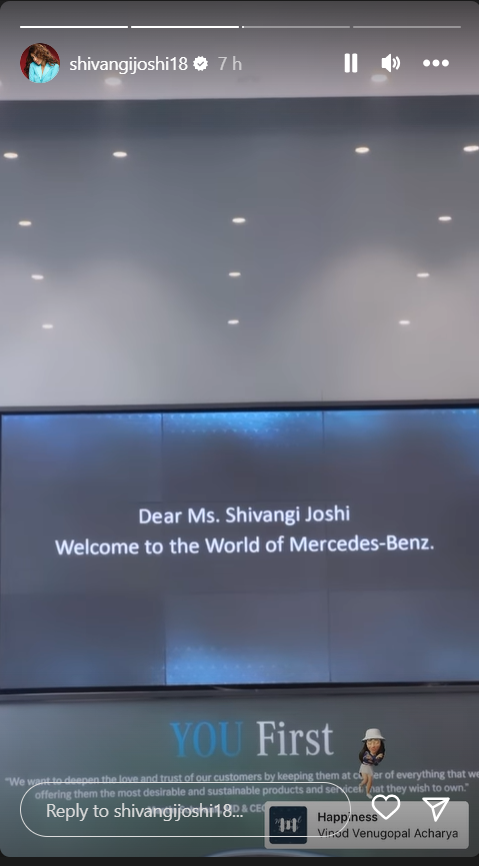 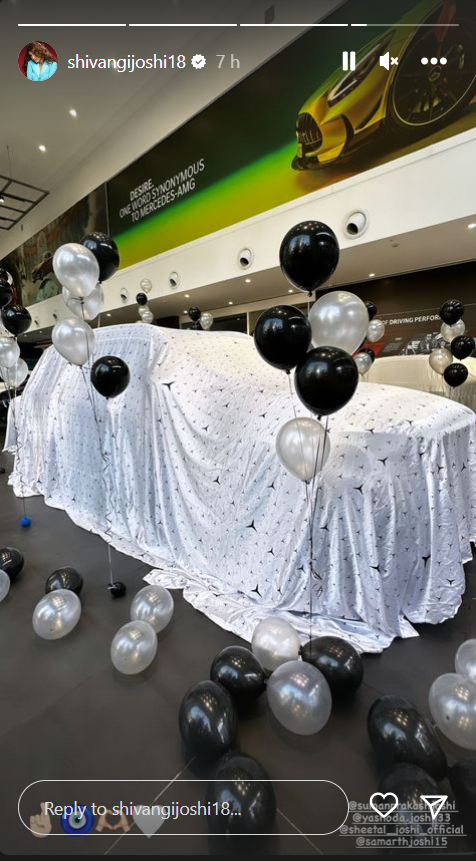 Bigg Boss 15 winner Tejasswi Prakash recently bought a luxurious Audi Q7 and shared the good news with her fans. The actress purchased the car at Rs 1 crore. In one of the videos shared by the papz, we can see her breaking the coconut in front of her new beast while her beau Karan Kundrra was standing right behind her.

Television actor Ram Kapoor recently surprised everyone when he purchased a brand-new Ferrari Portfolio car. The Bade Achhe Lagte Hain actor bought the car at a whopping cost of Rs 3.5 crore. He shared the news by sharing a picture with her wife, Gautami Kapoor where the couple can be seen posing beside their new beast. Besides, congratulating him, a section of netizens trolled him for buying the car as he has been inactive on TV as well as in films.

Television actor Karan Kundrra is a lover of cars and bikes. Besides having one Range Rover Sports SVR, a Mini Cooper and an older generation of Ford Endeavour, and a Ducati Diavel in bikes, he has recently added one more beast to his collection. Taking to his Instagram handle, Karan shared a video revealing that he is now the owner of one brand new sarge green-coloured Jeep Wrangler Rubicon. Check out the video here:

Actress Avneet Kaur purchased a brand-new luxurious car last year and shared the pictures on her social media handle. In the pictures, we can see her posing with her family in front of the new white Range Rover. Sharing the pictures, she also wrote, ‘This is my year of dreams coming true.#2022 #bucketlist #anotherone #blessed.’ Check out her post here:

Television industry’s most loved actress Jasmin Bhasin recently made headlines as she added a brand-new blue Mercedes-Benz GLC to her garage. In a video surfaced online, we can see the actress and her beau Aly Goni getting super-excited as they take the swanky car home.

Ashnoor Kaur shared a couple of pictures on her Instagram handle where she announced that she gifted herself a swanky new car on her 18th birthday and ticket off the first thing from her bucket list. The actress purchased a luxurious BMW car for herself and was seen posing with the new beast. Check out the glimpse here:

Urfi Javed is often in the headlines owing to her personal and professional life. Recently, the actress bought a pre-owned Jeep Compass SUV and looked super happy as it was her dream car. However, the actress was trolled for her dressing when she posed in front of her new beast but she didn’t let if affect her.

On the professional front, Shivangi was last seen on the television screen in the reality show, Fear Factor: Khatron Ke Khiladi 12 by Rohit Shetty. She has been doing music videos as well. After her track in the show, Yeh Rishta Kya Kehlata Hai came to an end, she was then roped in for the iconic socio-drama series, Balika Vadhu's second season. However, the series did not match with the hype of the first season, the makers shifted the show to the channel’s digital section.

Shivangi Joshi hops on the viral trend, shakes a l...