In the previous episode, Anupama asked Kinjal to take a decision. Kinjal tells Toshu that she won’t forgive him

In today’s episode, Baa tells Anupama that she shouldn’t have done what she did as she’s breaking Toshu’s family. Anupama tells that she couldn’t stay silent and let Kinjal suffer. Toshu tells that Anupama is breaking into a house instead of keeping them together. Baa tells that she is ruining Toshu’s life. Toshu asks Kinjal to forgive and forget his affair and move on. She asks him why should she forgive him as he snatched everything from her.

She tells that he doesn’t even feel guilty for what he did. She tells him that she’s not strong as Anupama and won’t be able to forgive him. Toshu asks her to forgive him. Barkha says that Vanraj and Toshu are the same. Kinjal tells she can’t stay here and says she will leave the house. Vanraj tells that she won’t leave the house but if there’s anyone leaving the house then it’ll be Toshu and he drags him out of the house. Toshu gets angry at Anupama and asks her if she’s happy now after breaking his family.

Baa yells at Anupama. Arya starts crying and Kinjal consoles the baby. Toshu calls his friend and asks if he can crash at his place. Baa gets angry at Toshu. Barkha tells that Anupama shouldn’t have exposed Toshu like that. Rakhi tells that it takes a lot of courage to confront their own child and Anupama did it. She asks Kinjal to go back home with her but she refuses.
This episode has been watched on the channel’s OTT platform. 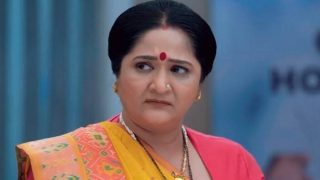