The Dior fashion show at the 2023 Paris Fashion Week was Borafied and in the most natural way possible. Know what it means below. BTS member J-Hope is easily the star of this year’s Paris Fashion Week and anyone saying otherwise has clearly not seen the impact this man has, not just to do with fashion and how he carries every look with a welcoming smile on his face but how the world of fashion just seems to be buzzing around him, dropping other acts in a quick second just for one peek at him. Following the announcements of fellow BTS members Jimin and SUGA being appointed as brand ambassadors for Dior and Maison Valentino respectively, fans were left questioning as to why the ‘Jack In The Box’ singer hadn’t been picked by a brand yet. Well, it seems that everyone and their neighbours are in the running to catch the trendsetter’s attention and one look at his Parish Fashion Week itinerary will have you convinced.

J-Hope and Jimin flying to Paris

On Wednesday, January 18, the two BTS members jetted from South Korea to Paris taking their global influence and charm from the airport to the fashion streets. After greeting their fans and saying cheerful goodbyes, the two arrived to a fervour response from the media and crowd at Frech city. Parisian ARMYs welcomed them with warmth and loud cheers and huddled along wherever they made even the briefest of appearances.

The BTS member has been teasing his collaboration with the fashion label for quite some time now following the septet’s full group deal in 2021. While their collective contracts may have ended, it seems more than likely that the ‘MORE’ hitmaker would sign with them individually and there are multiple signs pointing at it. His appearance at the 2023 Louis Vuitton Men's Fall-Winter 2023 Fashion Show in Paris on 19 January, was just another reason why. Dressed in a burgundy, purple and black camouflage ensemble he looked like the perfect special guest welcomed by everyone at the show. 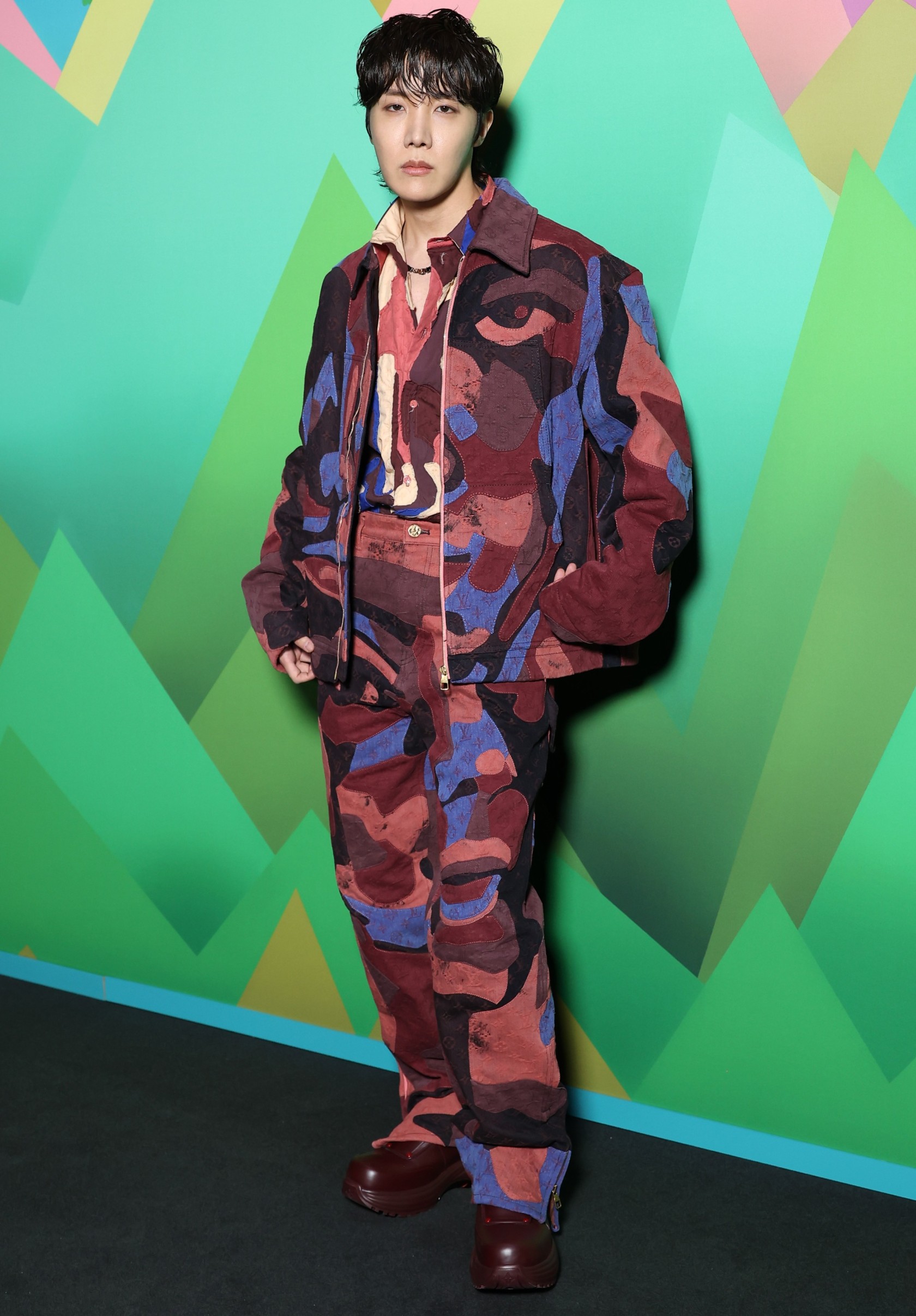 Jimin and J-Hope at Dior

The next day, things were even more chaotic as Jimin was supposed to make his first fashion week appearance after being signed as the brand’s global ambassador. What shocked the audience even further was J-Hope making his own presence known. The fever in the room went two levels high as the BTS members sat side by side at the front row and the cameras flocked to them, their flashes unceasing.

Jimin could be seen going elegant with his grey suit that boasted his fabulous dancer physique with a high-neck jumper inside. Sleek hairstyle with strands falling on his face lightly it was his no-jewellery look that raised eyebrows and made guesses about another possible brand deal coming soon.

J-Hope on the other hand went for an outfit defining his style to the T. A skirt look with a Dior necklace and some shades keeping it cool, his presence was unrivalled. He pulled off the outfit with a warm smile as he met multiple people looking for his attention. 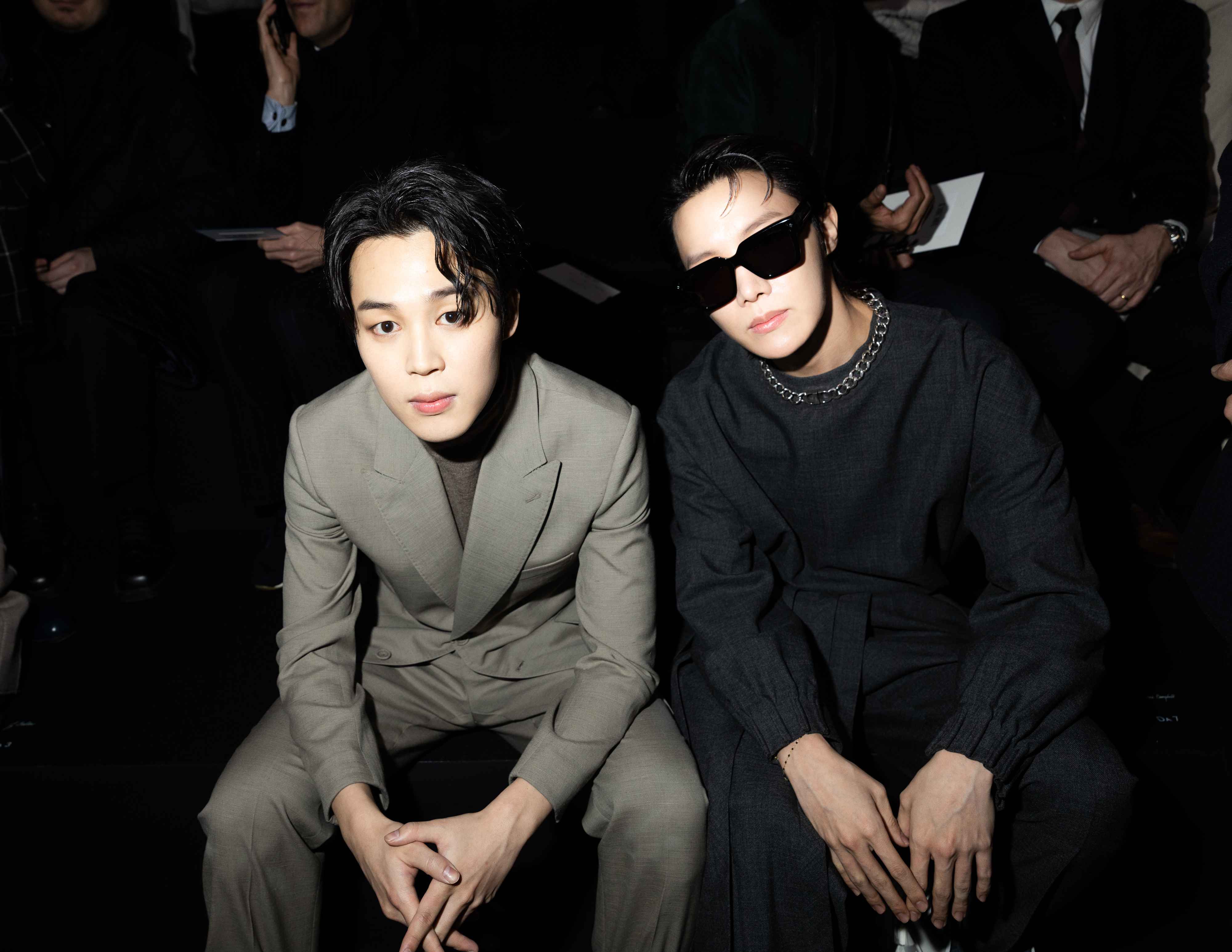 Jimin with the Beckhams and Dior’s artistic director

Kim Jones, the person behind the fabulous creations of multiple Dior looks, was snapped with the newest Dior ambassador. Appearing close-knit with his arm around Jimin who looked content, it was indeed a night to remember for the  Dior Men’s artistic director and the ‘Promise ‘ singer. The BTS member shared a collection of what could be called the highlights of the event as he was next seen with football legend David Beckham and his son Cruz, doing a V sign.

The ‘Twilight’ star has been the centre of multiple K-pop-related moments recently, especially with his reaction to EXO member Sehun making a beeline for ASTRO’s Cha Eun Woo at the Dior Men's Fall 2023 event. The BTS members have themselves been huge fans of the fantasy series and a new video featuring their iconic rendition of the vampire baseball match in one of the films has been gaining momentum. However, this week, a full circle moment happened at the Dior show in Paris when Robert Pattinson and Jimin took photos.

J-Hope and Jimin with Naomi Campbell

Another notable interaction from the night was between the global sensations, the two BTS members and British actress and model Naomi Campbell. Fans celebrated this momentous occasion on social media as one of the finest from the show, more so than any appearances or outfits.

Most talked about at Dior fashion show

Soon after the show, it was noted that BTS member J-Hope was the No.1 most-searched person related to Dior 2023 Fashion Show. Google Trends gave a clear understanding of who created the most buzz for the night and the ‘Arson’ singer was right at the top. Even on a global scale, the BTS member made himself one of the most talked about thanks to his undeniable presence. He was closely followed by actor Robert Pattinson and member Jimin at No. 2 and 4 respectively. This follows the recent boost in Dior sales after Jimin was revealed as their latest global brand ambassador.

ALSO READ: J-Hope IN THE BOX: BTS’ J-Hope to give a peek into his solo world with new documentary`