The main poster for ‘The Heavenly Idol' has been released. The visuals of Kim Min Kyu and Go Bo Gyeol surrounded by flowers in full bloom radiate sacred energy and arouse passionate fans.

tvN's new Wednesday-Thursday drama ‘The Heavenly Idol', which is scheduled to premiere on February 15, is the sacred and shameful adaptation period of Lambrary, a new world superintendent who became an unknown idol in Korea overnight. Another world is a world different from the world we live in, and it means a fantasy world with magic and mysterious beings. 'Sacred Idol' is a dramatization of the original work of the topic, which has been published in Naver web novels and webtoons thanks to its online popularity. Ye Ji Won (Lim Seon Ja), and other actors with both personality and acting skills are raising expectations.

Among them, Kim Min Kyu plays the role of Lambrary, the best high priest in the world, who woke up in the body of Woo Yeon Woo, a member of Wild Animal, who is a 5-year-old mangdol (short for a ruined idol) in the current world for unknown reasons. Go Bo Gyeol took on the role of Kim Dal, who became the manager of Wild Animal in order to save her favorite idol, Woo Yeon Woo. Among them, the 'The Heavenly Idol' side released the main poster on January 20th (Friday) to draw attention. 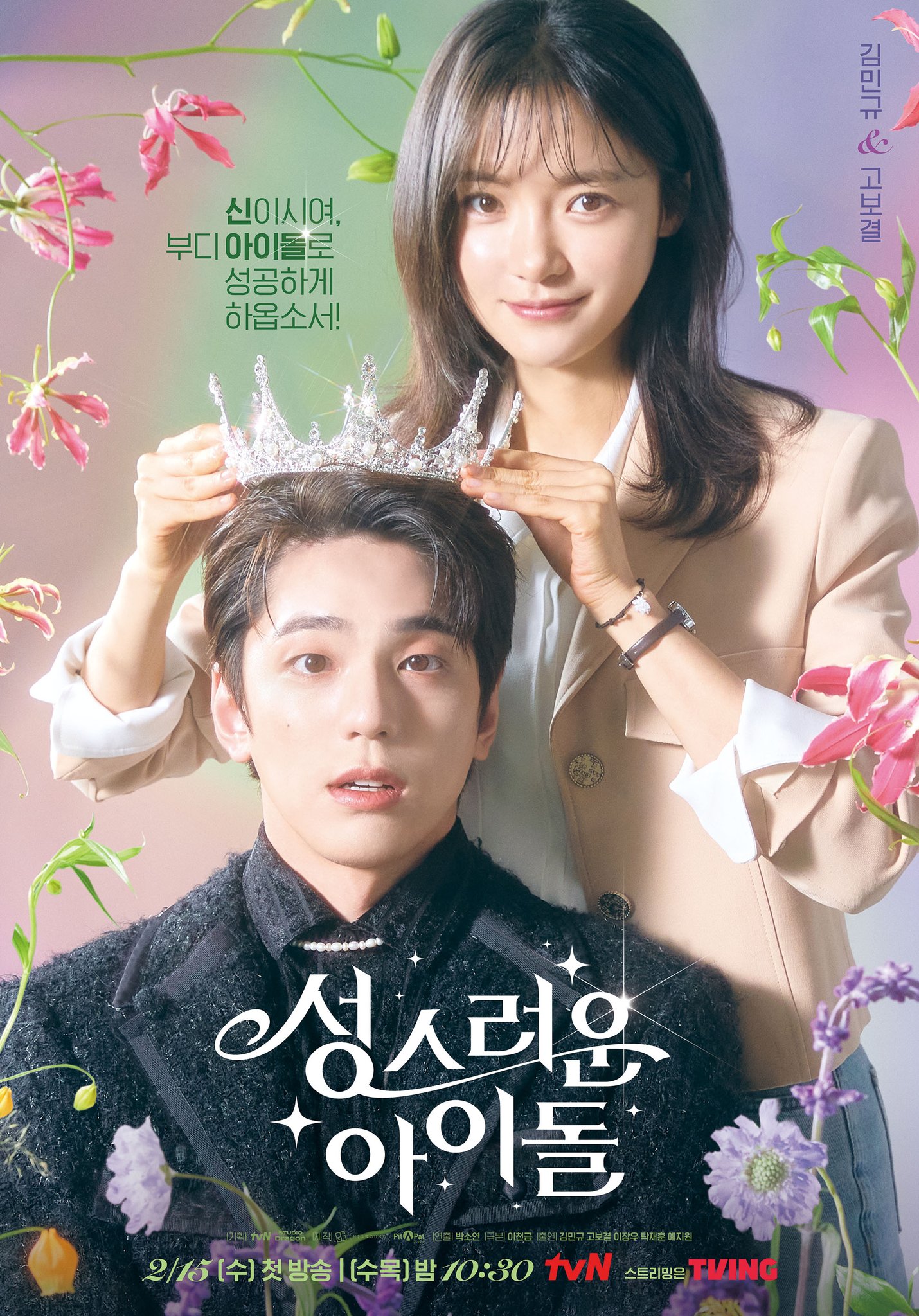 Furthermore, the contrasting expressions of the two people draw attention. While Kim Min Kyu is making a bewildered expression as if he can't believe the situation in which he suddenly became a ruined idol member in the world's best high priest, Go Bo Gyeol is showing eyes full of confidence that he will definitely make his idol a success. The relationship between 'My Favorite Idol' Kim Min Kyu and fan Go Bo Gyeol stimulates curiosity about whether Kim Min Kyu of 'The High Priest' can succeed as an idol with the help of Go Bo Gyeol.

Above all, the copy of "God, please let me succeed as an idol" reveals the earnest desire of Kim Min Kyu, the absolute high priest, as if the idol's success is God's will, drawing laughter. As a result, expectations are raised to the fullest in the sacred and shameful entertainment industry adaptation period of Kim Min Kyu, who has become an idol, and Go Bo Gyeol, who has become a manager.

The second teaser of The Heavenly Idol:

The second teaser video that was released begins with Kim Dal exploding his fanaticism towards Woo Yeon Woo, a member of Mandol 'Wild Animal'. Looking at Woo Yeon Woo's photo hanging in a frame at home, Kim Dal Eun expresses admiration for Woo Yeon Woo's shining beauty, saying, "Isn't he crazy good looking? However, soon after, Woo Yeon Woo, Kim Dal's favorite idol, claims that he is a 'Lambrary' and the head of the priests, causing Kim Dal a mental breakdown.

When Kim Dal sees Woo Yeon Woo, who has changed a lot before he has time to enjoy the joy of meeting him, he bursts into tears as if the sky has collapsed, and pleads, “Remember me.” Contrary to Kim Dal's earnest wishes, when Woo Yeon Woo continues to act incomprehensible, she calms down and says, "What if something goes wrong with this guy?" In the meantime, Kim Dal becomes the manager of Wild Animal, raising interest. “Does he want to win the Singer of the Year award?” She foreshadows that she will struggle to make Lambrary the best idol. In the image of Kim Dal, who clenches his fists and burns his will, a passionate fan heart explodes, making the clowns of the viewers twitch. This heightens the curiosity about how Lambrary, who became an idol Woo Yeon Woo, and Kim Dal, a steamed fan who became a manager for the group, will become entangled.

‘The Heavenly Idol' is a dramatization of the original work of the topic, which was serialized in Naver web novels and webtoons thanks to its online popularity. Expectations are raised with the harmony of actors with both personality and acting skills, such as Tak Jae Hoon (played by Seon Woo Sil) and Ye Ji Won (played by Im Seon Ja).