Upcoming variety show is discussing the possible premiere date and it’s the right time to talk about the star ensemble that will join this season. Korean cooking variety shows have found a niche following over time and this one happens to have included a Recording Academy winner. Earlier known for being veteran actress Youn Yuh Jung’s cooking show under the name ‘Youn's Kitchen’, a spin-off series has been planned. Actor Lee Seo Jin who was one of the cast members in the second season of the show, airing from January to March 2018, will be the central character this time around.

Na Young Seok PD who is known to have been the mastermind behind multiple popular Korean variety shows including ‘2 Days & 1 Night’, ‘New Journey to the West’, ‘Three Meals a Day’ as well as ‘Youn’s Kitchen’ as well as its earlier spin-off show ‘Youn’s Stay’, is said to be returning for this season of ‘Seojin’s’.

Earlier today, it was reported by Korean media outlets that the new restaurant variety show is in its last phase of post-production. They are said to be eyeing an early February date for the broadcast. While nothing has been confirmed, it is reported that the show will air every Friday. While the two seasons of ‘Youn’s Kitchen’ spanned over 9 and 11 episodes each, ‘Youn’s Stay’ had 12 episodes. A similar timeline is expected for ‘Seojin’s’.

It was confirmed that the cast lineup for ‘Seojin’s’ would include actor Lee Seo Jin, actress Jung Yu Mi, best friends and former ‘Youn’s Stay’ cast mates Park Seo Joon and Choi Woo Shik. This time, however, they will be joined by another member of the famed Wooga Squad. BTS’ V has reportedly been roped in to join the cast for this spin-off show. With such a sparkling team at its disposal, ‘Seojin’s’ may as well become one of the biggest and most anticipated variety show releases of the year.

Take a look at the reasons why ‘Seojin’s’ is set on the path to success.

It is known that unlike ‘Youn’s Kitchen’ which looked to promote Korean dishes through its program, this spin-off will also include lighter options for the global audience. Earlier, it was reported that the show has been shot in Mexico this season following the international filming locations of Indonesia and Spain for ‘Youn’s Kitchen’, followed by a domestic shoot in Jeonnam in 2020 for ‘Youn’s Stay’.

A popular name in the industry, Na Young Seok PD is known to be level-headed and strict when it comes to conducting variety shows. He is hardly ever swayed by the charm of the cast before him and sticks to rules. At the same time, he creates amazingly enjoyable shows which receive great viewership ratings by adding fun segments, dire situations and unbelievable twists. ‘Seojin’s’ is expected to bring his magic to the table.

Actor Lee Seo Jin who has been present for both the seasons of ‘Youn’s Kitchen’ and one season of ‘Youn’s Stay’ is familiar with the overarching concept. It was observed that he was of great help during those shows and brings experience as well as leadership to the show. Turning it to focus on him after Youn Yuh Jung’s decision to depart may become a successful change if he manages to pull off the role. Much like Lee Seo Jin, Jung Yu Mi has also been a part of the earlier three seasons and brings her own understanding to the show.

Actors Park Seo Joon and Choi Woo Shik are best friends off-camera and jokesters on camera. They have a tried and tested chemistry which was previously seen in ‘Youn’s Stay’, ‘Summer Vacation’, ‘Parasite’ and ‘IN THE SOOP: Friendcation’. This time the two will be joined by BTS member V who was seen leaving for Mexico as well as spotted alongside Park Seo Joon during a restaurant visit there. The K-pop icon confirmed his participation in the show by sharing a photo from the shoot where he could be seen staring at the bright moon with a shirt with actor Lee Seo Jin’s caricature. 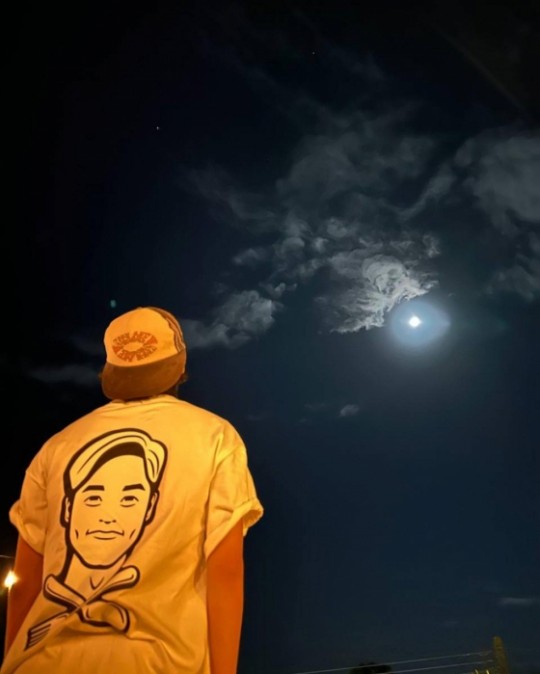 While BTS member V is known to not have a lot of skills in cooking, as previously seen during the group’s activities including his memorable ‘squirrel plate’ incident in ‘Run BTS’, he brings charm wherever he goes. A certified ‘social butterfly’ his synergy with the other cast members will be looked out for. He goes into ‘maknae mode’ around his hyungs Park Seo Joon and Choi Woo Shik which was very visible throughout ‘IN THE SOOP: Friendcation’ and so it will be interesting to see him back with them, though this time actor Park Hyung Sik and singer Peakboy will not be present.

BTS’ V and Peakboy’s interaction during the MV sho...