Shahid Kapoor shares breathtaking view from his house; 9 other PICS/VIDEOS of their sea-facing duplex in Worli

Shahid Kapoor and Mira Rajput’s sea-facing apartment in Worli offers a panoramic view of Mumbai’s stunning skyline. Here are some pictures of their sea-facing abode. Shahid Kapoor shares breathtaking view from his house; 9 other PICS/VIDEOS of their sea-facing duplex in Worli

Shahid Kapoor and Mira Rajput, who earlier lived in a sea-facing Juhu apartment, moved into a swanky new abode in Worli last year. The couple had booked the apartment in 2018, and back then, reports on the Internet stated that it cost a whopping Rs 58 crore. Shahid and Mira’s new duplex apartment offers a stunning view of the Bandra-Worli Sea Link and an unobstructed, panoramic view of Mumbai’s beautiful skyline. Mira Rajput often shared glimpses of their new home when the interiors were still being done. Ever since Shahid and Mira moved into the Worli flat in 2022, they have been sharing some beautiful pictures and videos from their home on Instagram, and everything about the new apartment screams grand.

Early in the morning today, Shahid Kapoor took to his Instagram story to post a picture of the gorgeous view from the balcony of his Worli apartment, and wished his fans a good morning. The picture was taken in the wee hours, and we can see the beautiful lights on the Sea Link, as well as the lit skyline of Mumbai. Check out the picture shared by Shahid below! 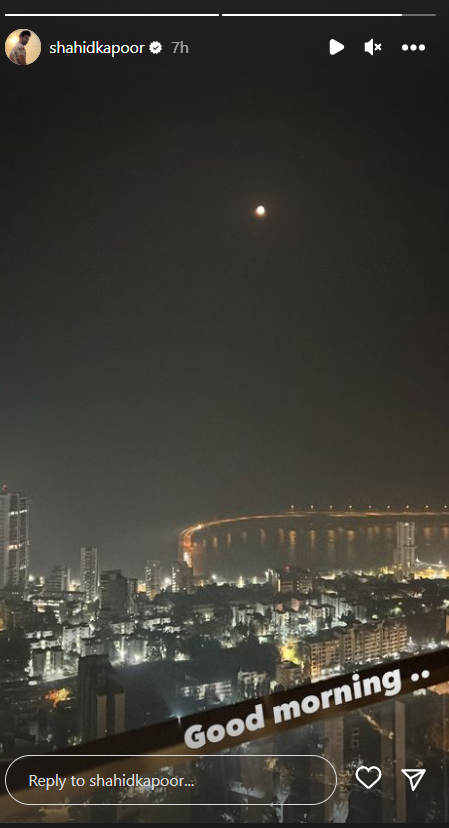 Annkur Khosla, who designed Shahid Kapoor and Mira Rajput’s Worli home, shared a picture with the couple a few days ago. The picture shows her posing with Mira and Rajput in the balcony of their apartment. The picture features a huge white foot sculpture, and in her caption, Annkur described it as, “My favourite location in the new home —An ode to the man whose footsteps and dance moves can burn the dance floor !” The beautiful view from the balcony is also visible in the picture.

In her caption, Annkur Khosla wrote that she met Shahid over a decade ago, and worked on his first project. Over the years, she got to work on some more projects with the family. “Over the years , I feel I’ve grown with the family and the warmth., affection and bonhomie that we all share made a challenging project (given the times of the world situation ) also filled with hope and rays of creativity..@shahidkapoor & @mira.kapoor — you both are my sunshine and every meeting from the beginning to the finale has been memorable.. !” she wrote.

Just yesterday, Shahid Kapoor took us inside his closet that housed not just his outfits, but also his massive helmet collection! “Hamlet’s helmets,” he wrote, while sharing the reel from the closet of his home. Annkur Khosla also shared the reel on her Instagram and wrote that the helmets are placed in a beautifully hatch textured glass closet, and that the ‘magic of automation at a click of the button reveals them’. The closet also has beautiful hanging lights, check it out below!

In October last year, Mira Rajput posted a picture of herself posing in the lavish living room of her apartment. She can be seen sitting on a sofa chair, with huge panelled wall with lighting fixtures behind her. “Who knows? Is this the start of something wonderful and new?” she wrote, while sharing the picture. Next to the panelled wall is a white wall with a massive abstract painting. A marble centre table, and a white couch are also partially visible in the picture. Take a look at it below!

Mira also shared another picture with Annkur Khosla, in which they are seen posing in the living room. She thanked the designer for bringing their home to life. “You struck a fluid balance between @shahidkapoor’s drive for pushing creative limits and my need for efficiency and comfort. Somewhere in the middle of form & function, our home came alive, with laughter and giggles, the first whistle of the pressure cooker and a whisper that said “wow, are we really here?” wrote Mira.

Mira Rajput loves to play the piano, and no points for guessing her favourite spot in the house! Mira shared a video of herself playing the piano, and wrote, “Somewhere over the rainbow. Back to playing the piano and getting the hang of it. I learnt this off a YouTube tutorial but I realise I prefer reading music than watching it being played! Every evening once the kids are asleep and I’m done with the day, I’ve been practising... I think I’ve found my spot.”

Below are a few other pictures and videos shared by Mira Rajput from the piano room.

Their dining space is also beautiful, and is next to the balcony that offers a stunning city view. Meanwhile, Mira also once shared a small glimpse of the kitchen, the balcony and some other spaces inside the house. Check out the pictures below!

Shahid Kapoor and Mira Rajput’s sea-facing house in Worli is beautiful, isn’t it?

ALSO READ: Farzi: Shahid Kapoor and Vijay Sethupathi’s web series gets a release date; 5 things to know about the project

Anonymous
Jan 09, 2023
Haha Kareem’s and her jealous comments above … must be burning because he’s much better than her senior citizen of a husband .. both greedy sisters paid their due karmas ..
0 REPLY

Anonymous
Jan 09, 2023
Wow shahid has come a long way! Your awesome shahid and sincerely wishing you and your family the best .. you deserve it .. the above obvious jealous comments we’ll just ignore them .. your a lambhi race ka ghoda and you’ll always win because you have grit and principles!
0 REPLY

Anonymous
Jan 08, 2023
Every time he wants PR he uses his house or his wife for publicity .
0 REPLY

Anonymous
Jan 08, 2023
No wonder she felt entitled to name and shame the hotel in Sicily on social media. Royalty with such a magnificent home is not used to second class treatment and the world should be accomodating her every need.
0 REPLY

Anonymous
Jan 08, 2023
How can he afford this premium real estate?
0 REPLY

I Feel Happy To Have That Somebody Around Me - Sha...

EXCLUSIVE: ‘I was pleasantly surprised when Shah R...