Shark Tank India 2: Who is Ganesh Balakrishnan? 5 Things to know about Flatheads Co-founder

Shark Tank India 2 premiered on January 2, and since then, it has become the talk of the town owing to its interesting pitches. Shark Tank India season  2 is one of the most popular reality show on Indian Television and lately, it has become the talk of the town owing to its interesting pitches. In a recent episode, Shark Tank India season 2 witnessed an intriguing picture by a shoe brand Flatheads co-founder Ganesh Balakrishnan. Ganesh mentioned that Flatheads started in 2019 but the Covid-19 pandemic created trouble as the lockdown forced people to stay indoors. After explaining his pitch, Ganesh broke down while confessing that his business isn’t working well and that he is penniless. He also stated that he invested his personal money Rs 35 lakhs in the last 2 months to keep the business afloat.

When asked about his future plans, Ganesh revealed that he will search for a job and work with someone who has done this before and will try to set up his own business later. Ganesh then received an offer from two sharks Peyush Bansal and Vineeta Singh who offered him Rs 75 lakhs for 33.3% equity in the company. This offer valued his company at Rs 2.25 crore. But Ganesh had asked for a valuation of Rs 25 crore as its company generated sales to the tune of Rs 3.4 crore in FY22. Even though Ganesh invested his personal money to run the business, he declined the offer put forward by Peyush and Vineeta.

While Ganesh was narrating his story and got emotional, Aman Gupta shared his struggle story with everyone to motivate him. He said, ‘My 3 businesses failed but I didn’t stop. I restarted my life, stopped the business, did a job for 2 years, and started my business again.’ Aman further added, ‘That's what an entrepreneur is: he stands back up after falling down. You are down but not out my friend.’ Soon after this,  Anupam Mittal also tells Ganesh, ‘Shark Tank is not just about funding. It is also about perspective. I have an open offer for you for a job.’ Anupam and the other sharks were quite impressed with Ganesh for his willpower and optimistic attitude. Anupam even took to his Twitter handle and shared a post praising Ganesh and wrote, "‘Success builds ego but failure builds character’ Spoke to @ganeshb78 of @flatheads_in today & thrilled to learn that he has landed firmly on his feet … until the day he starts up again."

The Shark Tank India season 2 episode featuring Flathead's pitch aired on January 6 and the shoe company became widely popular on the internet. Surprisingly within 48 hours, Flatheads managed to sell off its entire inventory. On Sunday, December 8, Flatheads Co-founder Ganesh Balakrishnan took to his LinkedIn profile and penned a long note informing that Flatheads inventory has been sold out. He wrote, "To be honest, I was dreading the airing of the Flatheads pitch on Shark Tank India. Breaking down on national TV isn't exactly great for one's self-confidence. What I definitely didn't expect is the episode to be received the way it has been, and it is very very heartening to see that people are applauding the entrepreneurial spirit - of all startup founders, with me as a proxy. We've almost sold out our inventory in India, so pardon us if you aren't able to find your size on www.flatheads.in. Would be amazing if you can tell your friends in the US and UAE to try our shoes." 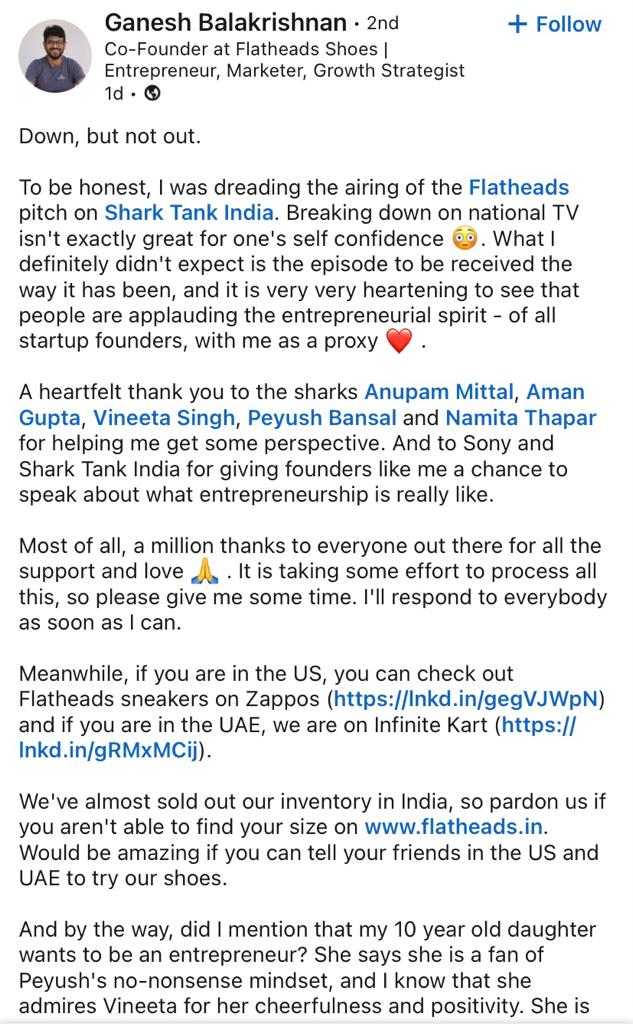 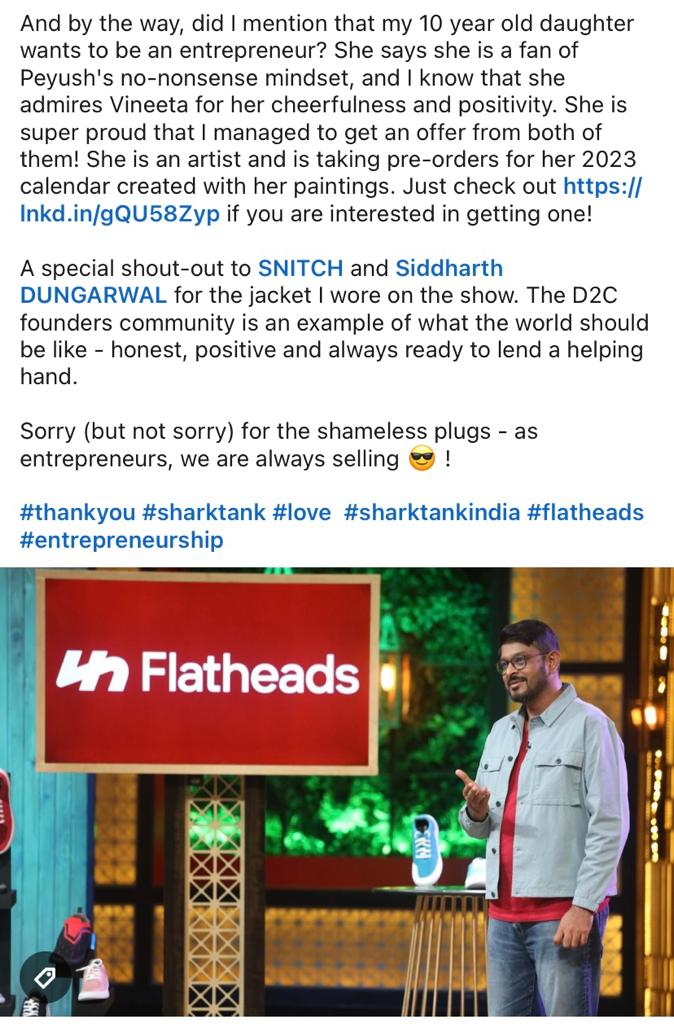 Here are 5 things to know about Flatheads Co-founder Ganesh Balakrishnan:

Ganesh Balakrishnan is an entrepreneur with an IIT background and holds 20 years of global experience. He is the Co-Founder of Flatheads, a brand that creates ‘all-day casual shoes for the urban workforce’ priced between ₹1,000-₹5,000 a pair. It also offers India’s first linen sneakers and the world’s first banana fibre sneakers.

Before joining this company he worked with companies like Momoe Technologies, ShopClues, Bain & Company, Honeywell Technology & others.

He also holds a degree from the Indian Institute of Management, Bangalore.

Speaking about his personal life, Ganesh Balakrishnan is married and has a 10-year-old daughter.  Ganesh Balakrishnan's wife is also a Software Engineer and works for a German company. The family is settled in Bengaluru and run their shoe business from there.