The team of Sidharth Malhotra's Mission Majnu hosted a special screening on Tuesday. But it was Kiara Advani's presence that grabbed everyone's attention. Sidharth Malhotra, who recently celebrated his birthday, is currently busy promoting his upcoming film, Mission Majnu. He has collaborated with Rashmika Mandanna for the spy film. Ahead of the release, the team of Mission Majnu hosted a special screening for the industry on Tuesday night in the city. Amongst everyone, it was Kiara Advani's presence that grabbed everyone's attention. The videos and pictures of Kiara and her rumoured beau Sidharth, who are reportedly set to tie the knot, have taken over the Internet.

Kiara Advani blushes while standing next to Sidharth Malhotra

Kiara and Sidharth might have remained tight-lipped about their alleged romance but their eagle-eyed fans manage to notice the tiniest details about them. Even their social media PDA speaks volumes about their relationship. Ahead of their grand wedding, the couple was seen leaving everyone in awe with their sweet camaraderie. In the viral video, the duo is seen standing next to each other after the screening. Sidharth was seen holding Kiara while they were talking to each other. Soon, he is seen talking to Milap Zaveri and that's when the paparazzi asked Kiara to pose with him for the pictures. The actress was seen blushing as they asked her to pose.

The paparazzi shouted, "Peeche dekho, peeche dekho ek baar, ek baar Kiara ji." While looking at them, a blushing Kiara said, "Puri cast ka lijiye." She then grabbed Milap and asked Sidharth to pose with the Mission Majnu cast. He was seen holding Kiara's hand again as she rushed towards her car. The video also shows that they left the venue together in the same car. The way Sidharth was trying to hold Kiara was all things love. Have a look:

Soon after the video was shared on social media, Sidharth and Kiara's shippers couldn't stop gushing over them. They were all hearts for their pure love. A fan commented, "Sid looks so much in love with kiara. He is getting the best finally...lots f love." Another fan wrote, "Rab ne bana di jodi". One of the comments also read, "SidKiara supremacy."

Back in 2021, Sidharth and Kiara went on a secret New Year vacay to Ranthambore. The duo posted their solo pictures on their respective Instagram handles. But on Sidharth's birthday recently, Kiara posted an unseen picture with him from their Ranthambore trip. After she posted the picture, Ananya Panday wrote, "I think I took this picture cuties!!!!" During that time, Ananya was also holidaying with her then-boyfriend Ishaan Khatter at the same place. Along with the picture, Kiara wrote, "Whatcha lookin at birthday boy." This picture and Kiara's caption took the Internet by storm.

Several reports claim that the rumoured love birds are all set to take their relationship to the next level and tie the knot in February this year. Reportedly, their wedding is expected to take place on February 6. The pre-wedding festivities such as haldi, mehendi and sangeet will take place on February 4 and 5. The wedding will reportedly take place at the Jaisalmer Palace Hotel, amidst high security at the venue. Their wedding rumours gained momentum after they were spotted exiting Manish Malhotra's house together recently.

In a recent interview with GOODTIMES, he was asked about his alleged wedding hitting headlines and whether he has received an invitation. The Shershaah actor replied, "Mujhe nahi aaya (invitation). Kisine invite nahi kiya mujhe shaadi mein. Nobody has invited me. Twice I have read dates and all, and I was like, 'Kamaal hai, acchha?' I also checked for a moment 'Am I getting married?' I have no clue."

The couple was seen celebrating New Year in Dubai. Their pictures from the party were shared by Karan Johar and Manish Malhotra. Rani Mukerji too joined the couple for the party. They looked deeply in love with each other in the pictures. Lately, the duo has been openly posing together and sharing pictures on social media. Earlier, they used to keep their meetings quite low-key. 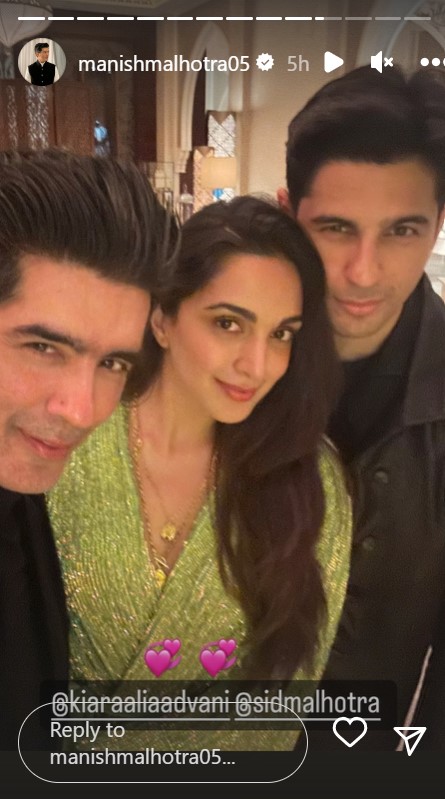 Sidharth has Mission Majnu coming up on January 20 on Netflix. The trailer received an overwhelming response from the audience. Apart from this, he has Yodha co-starring Disha Patani and Raashii Khanna. He will be making his digital debut with Rohit Shetty's cop thriller series Indian Police Force. He is currently busy shooting for it.

Kiara, on the other hand, has SatyaPrem Ki Katha with Kartik Aaryan. It will mark her second collaboration with him after Bhool Bhulaiyaa 2. She also has RC15 alongside Ram Charan. The duo recently shot a song together.

Anonymous
Jan 18, 2023
In the past year or so he has started looking really old. His looks are not fading but quickly running away.
0 REPLY

Ahead of his wedding with Kiara Advani, Sidharth M...