Mission Majnu is gearing up for its OTT release. Meanwhile, the makers conducted a grand screening event for Sidharth Malhotra-Rashmika Mandanna's film in Mumbai. Mission Majnu, the highly anticipated spy film is finally set to have its grand OTT release on Netflix, on January 19, Thursday. The much-awaited film, which features Sidharth Malhotra as the central character, is finally getting its world premiere after a long wait and multiple delays. The project, which is directed by Shantanu Bagchi, features Rashmika Mandanna as the female lead. Ahead of the grand release, the makers of Mission Majnu held a grand screening event for the film in Mumbai, tonight.

The grand screening event of Mission Majnu, which was held in Mumbai on January 17, Tuesday, was attended by the entire star cast and crew of the film including lead pair Sidharth Malhotra and Rashmika Mandanna, and others. Along with the film's team members, renowned Bollywood celebs including filmmaker Karan Johar, Sidharth's rumoured girlfriend Kiara Advani, Sita Ramam actress Mrunal Thakur, actresses Nora Fatehi, Rhea Chakraborty, and others attended the screening event of the film. 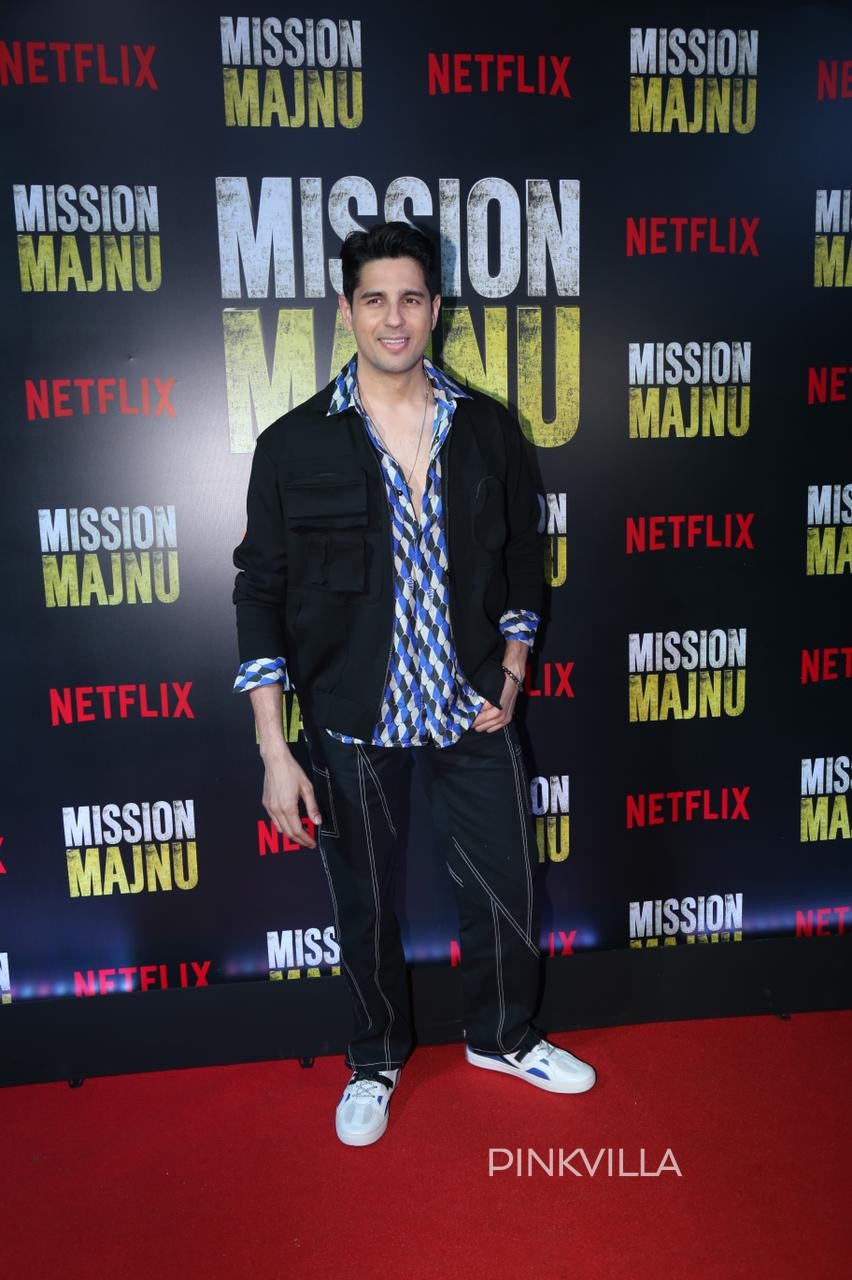 Sidharth Malhotra, the leading man of Mission Majnu looked handsome as always in a semi-formal look, at the screening event of his ambitious project. The popular star opted for a blue printed casual shirt, which he paired with a navy blue blazer and matching trousers, for the night. Sidharth completed his look with a pair of blue and white printed sneakers and a statement necklace.

Rashmika Mandanna in a blue bralette 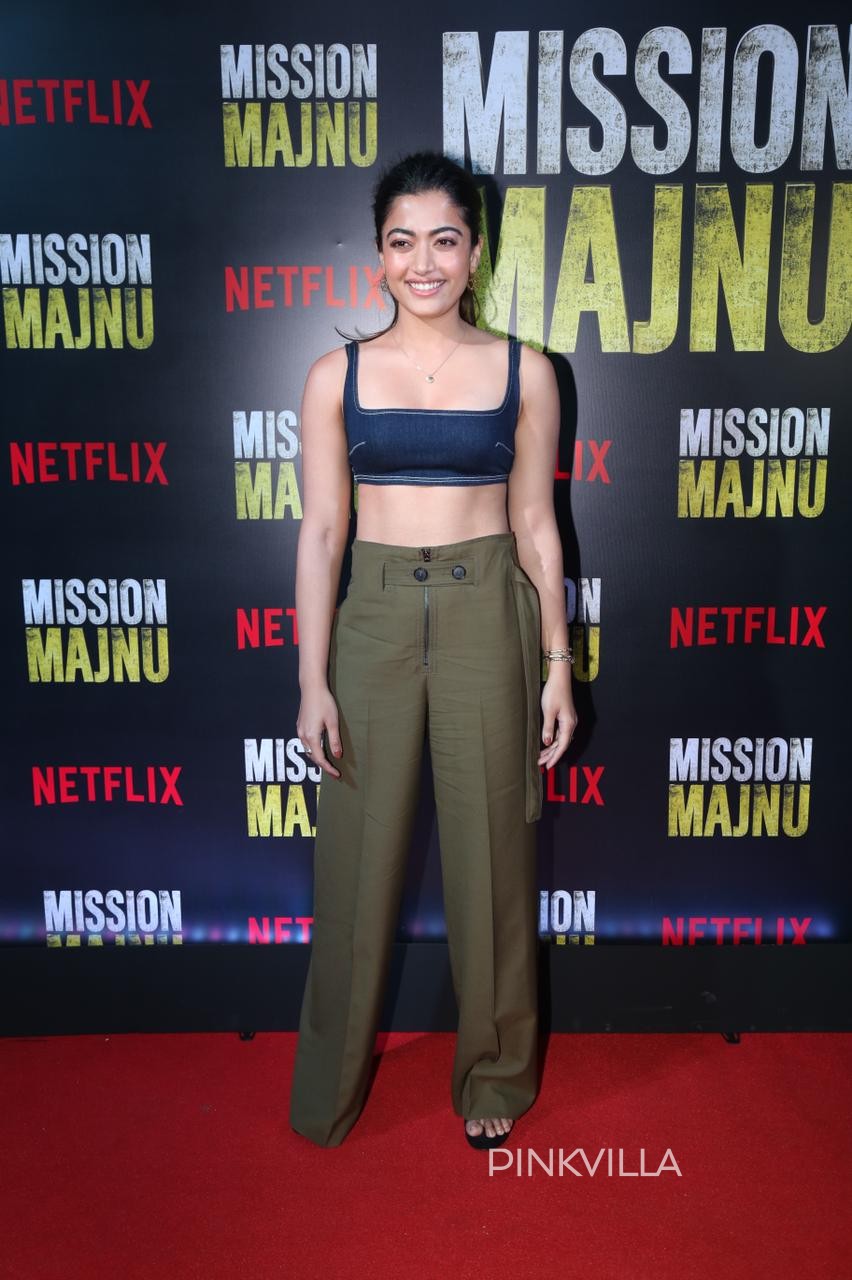 The leading lady of Mission Majnu looked beautiful in a navy blue denim bralette top, which she paired with a pair of olive high-waist trousers. Rashmika Mandanna completed her look with dewy, natural make-up, a pair of black heels, and minimal jewellery. For the unversed, the actress, who is one of the most sought-after stars in the South Indian film industry, was originally supposed to make her Bollywood debut with the Sidharth Malhotra starrer. However, the project was delayed multiple times, and Rashmika eventually made her B'town debut with the recently released film Goodbye. 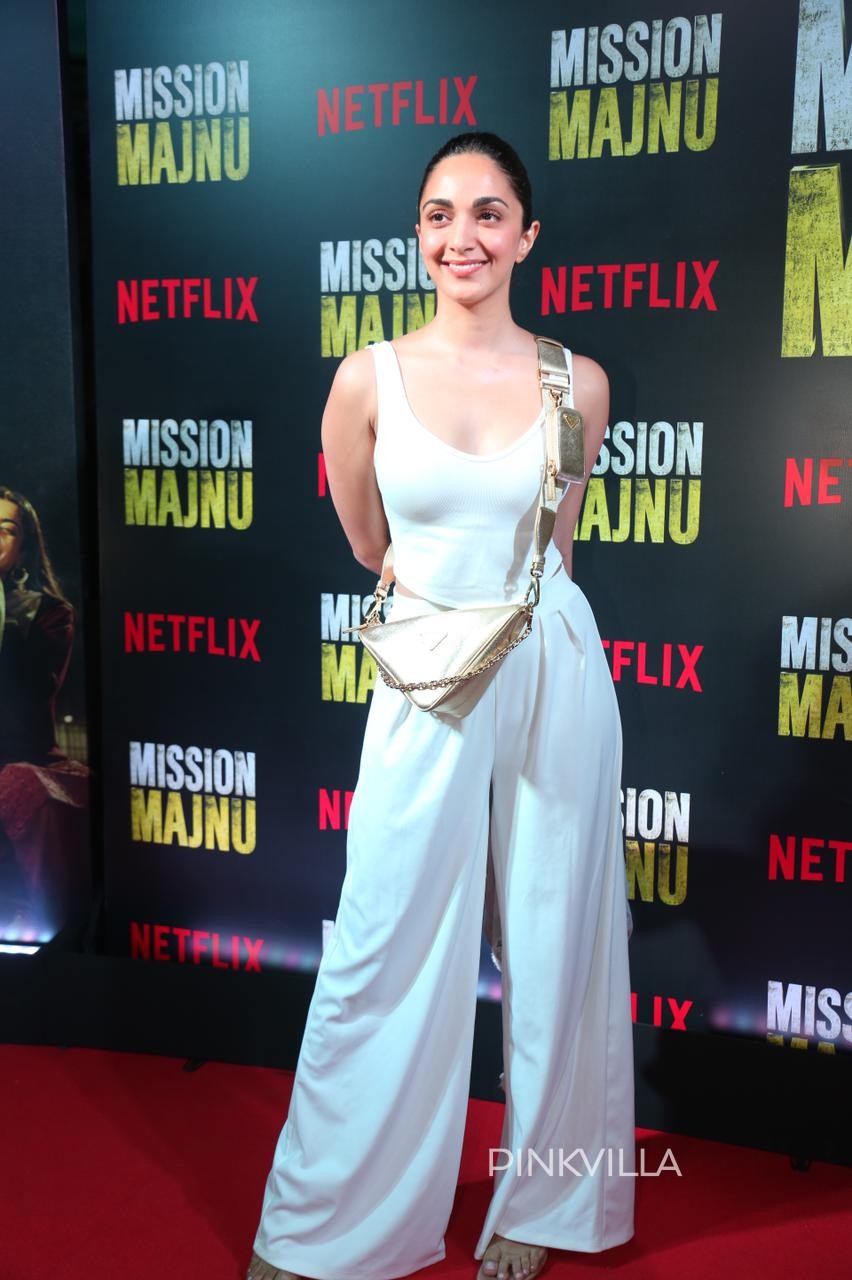 Kiara Advani joined her rumored boyfriend Sidharth Malhotra for the grand screening event of Mission Majnu. The actress looked ethereal in a white crop top and a pair of matching trousers, which she paired with a statement golden cross-body bag. Kiara completed her look with dewy, rosy make-up, nude slippers, and a sleek bun with no accessories.

If the reports are to be believed, Sidharth Malhotra and Kiara Advani are set to enter wedlock in February, this year. The grapevine suggests that the Shershaah pair has decided to tie the knot in a traditional Punjabi ceremony which will be held in Jaisalmer, Rajasthan. On the occasion of Sidharth Malhotra's birthday, the actress shared a picture which was clicked during their Ranthambore, and wrote: "Whatcha lookin at birthday boy."

Karan Johar at the screening 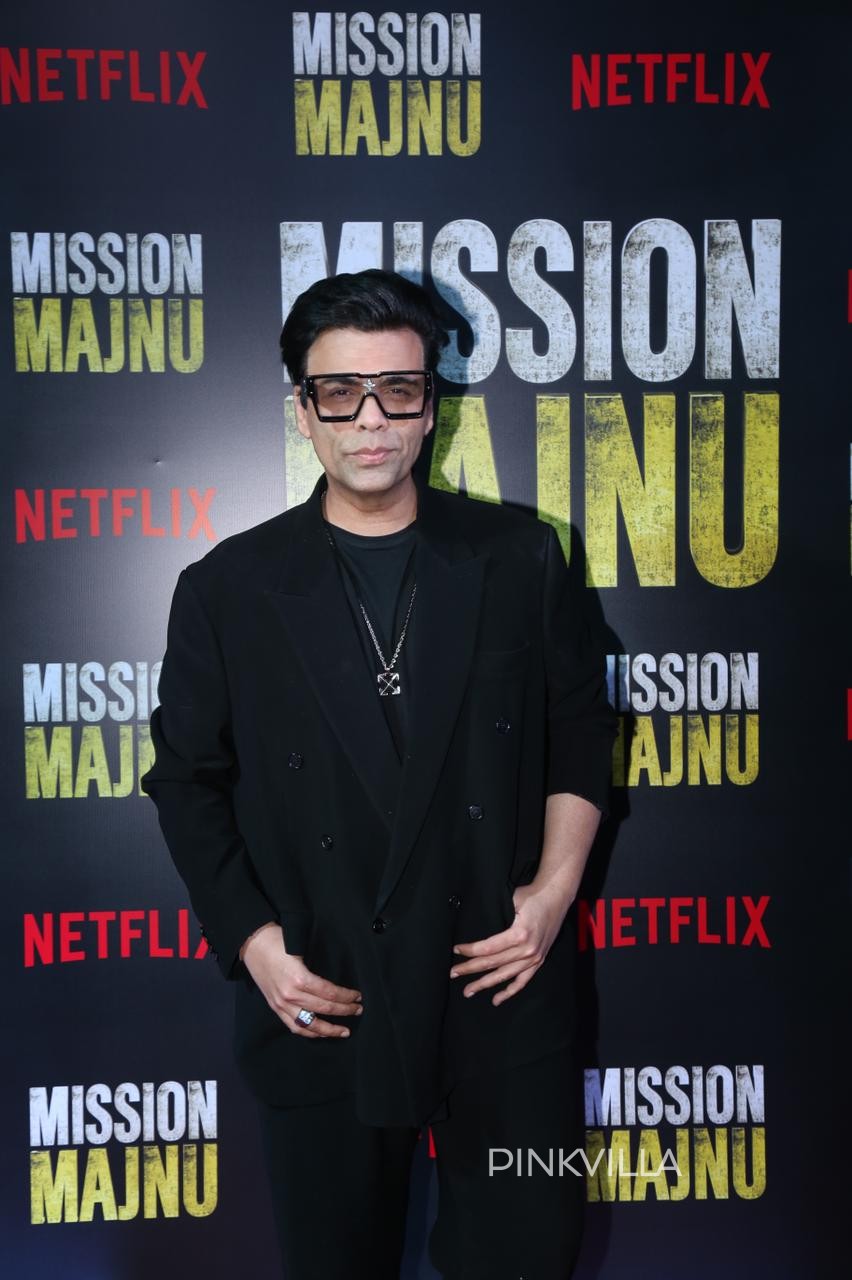 The renowned filmmaker, who attended the screening event of Mission Majnu, looked stylish in his all-black look. Karan Johar opted for an oversized black jacket, which he paired with a matching t-shirt and a pair of black trousers. The director completed his look with statement Louis Vuitton glasses, and a statement necklace, and a ring.

Mrunal Thakur in a black dress 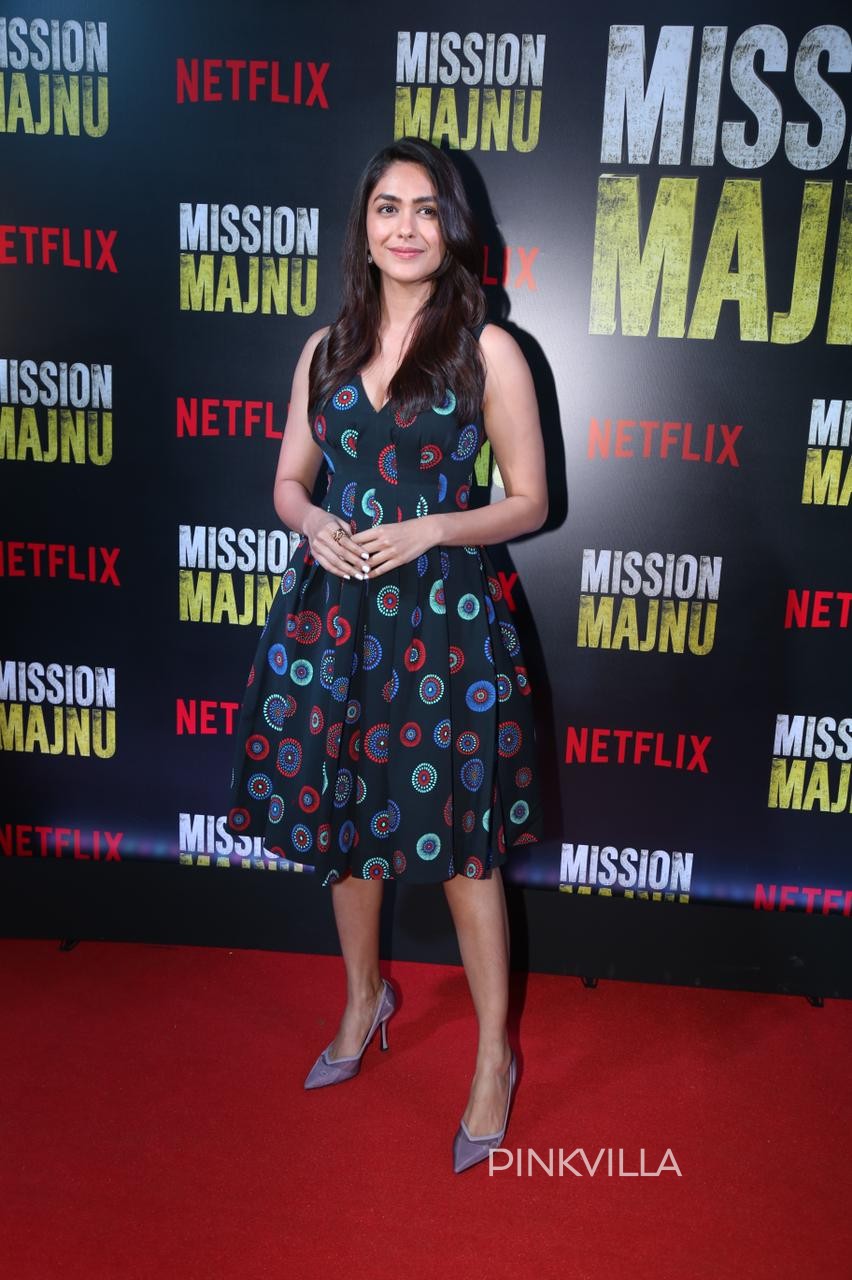 The talented actress, who delivered a stellar performance in the pan-Indian blockbuster Sita Ramam and won millions of hearts, joined the Mission Majnu team for the screening of the film on Tuesday night. Mrunal Thakur looked pretty in a black printed knee-length dress. She completed her look with grey stilettos, rosy make-up, and minimal jewellery. 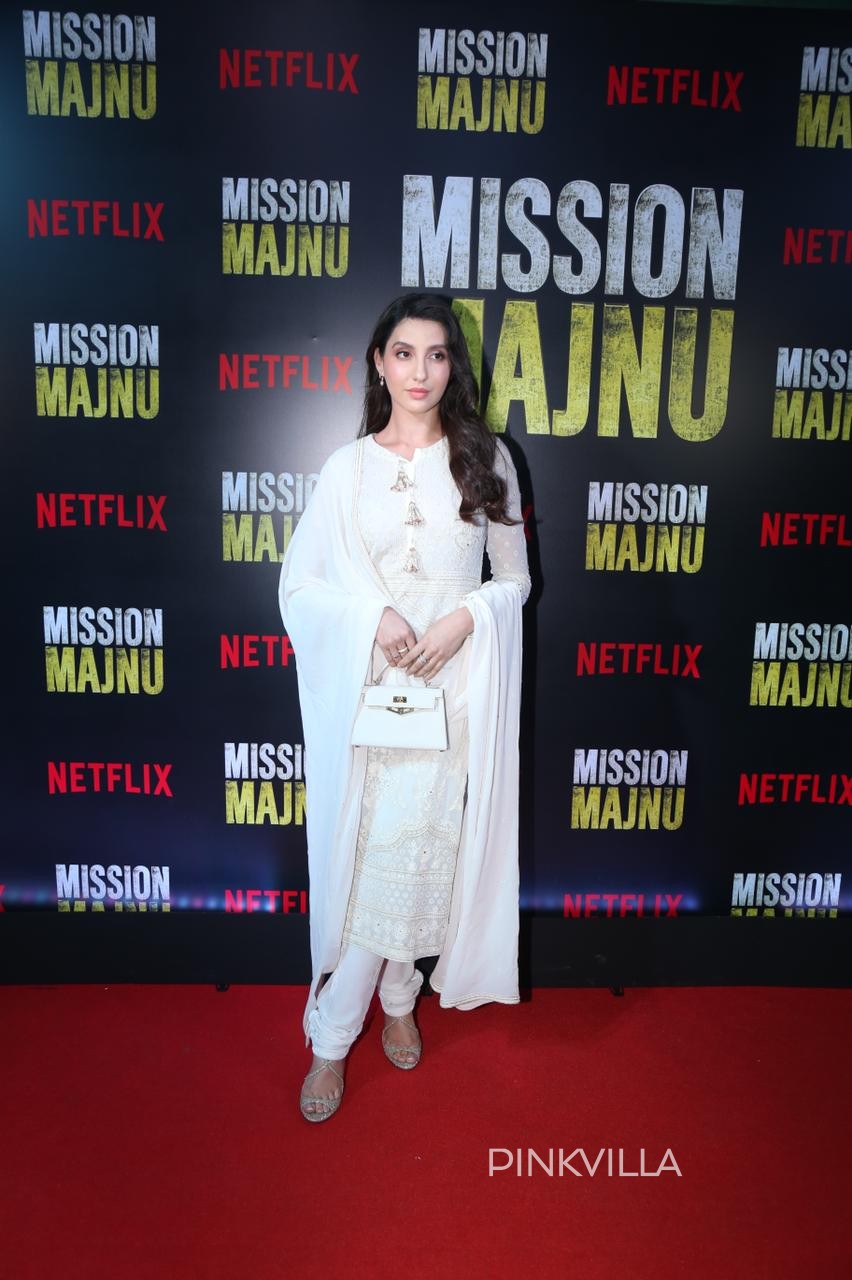 The actress-dancer opted for a desi look, as she attended the screening of the event of Mission Majnu. Nora Fatehi looked beautiful in a white chikankari kurta, which she paired with a matching churidar bottom and dupatta. She completed her look with a matching white handbag, minimal accessories, and dewy make-up.

Rhea Chakraborty at the event 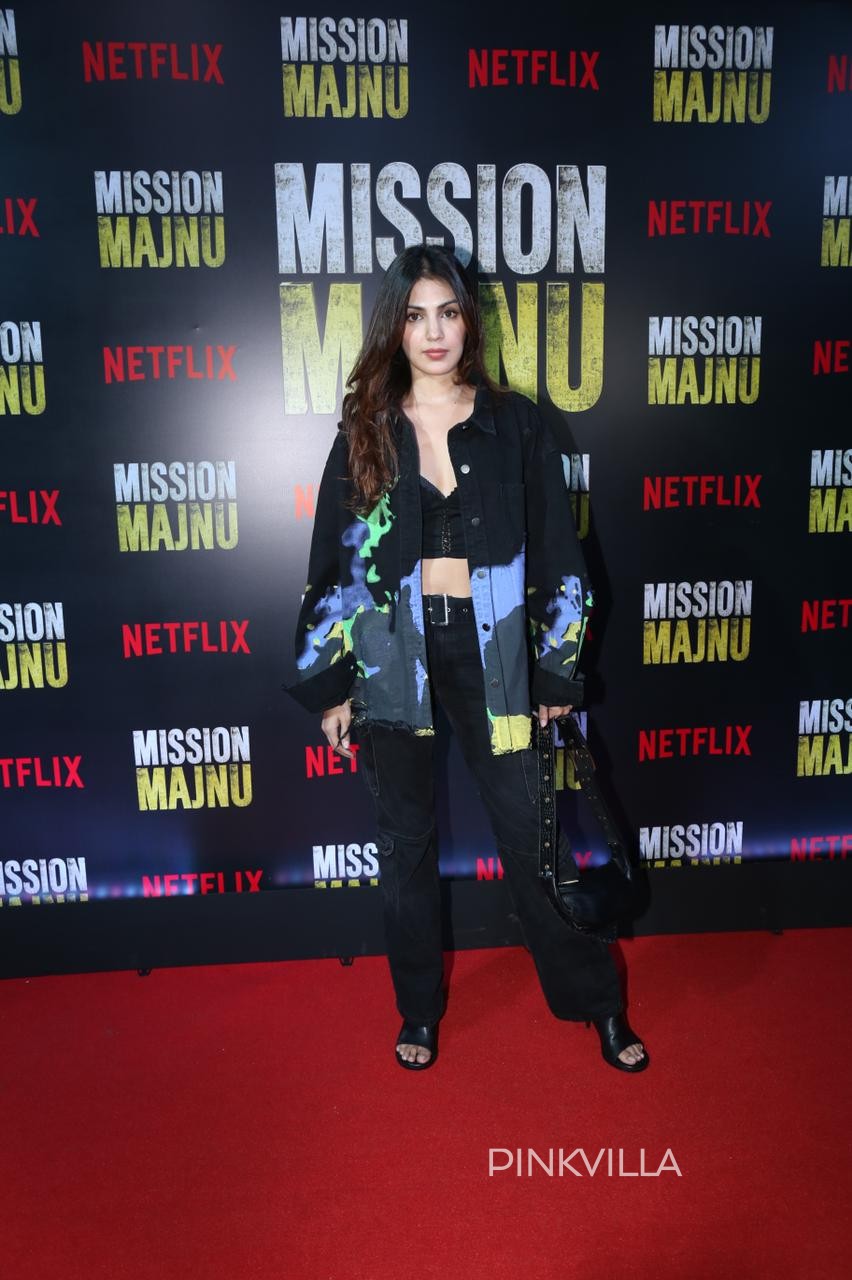 The famous actress looked stylish in a black and camouflage oversized denim jacket, which she paired with a black bralette top and matching trousers, as she attended the screening event of Mission Majnu with the team members. Rhea Chakraborty completed her look with black heels, free harido, and a matching handbag.

Everything to know about Mission Majnu

Sidharth Malhotra is back with yet another action-packed role in Mission Majnu, which is directed by Shantanu Bagchi. The promising official trailer of the much-awaited project hints that it revolves around the life of an Indian RAW agent named Amandeep Ajitpal Singh who heads to Pakistan on an undercover mission, and adapts the fake identity of Tariq Ali in the Netflix film. Rashmika Mandanna is playing the role of Nasreen, a visually challenged young woman with whom Amandeep falls in love, and eventually gets married. Mission Majnu features a stellar star cast including Parmeet Sethi, Sharib Hashmi, Mir Sarwar, Kumud Mishra, Arjan Bajwa, Zakir Hussain, Rajit Kapur, and others in the supporting roles.

Anonymous
Jan 18, 2023
there is something off about Sid lately..he has started looking super ordinary..not sure if it\'s black hair color or something else
0 REPLY