Priyanka Chopra hosted a special screening of Chhello Show, India’s official entry to Oscars 2023, and it was attended by Pan Nalin, Bhavin Rabari, and others. Priyanka Chopra took to her Instagram account to share a few pictures from the screening of Chhello Show. The first picture shows Priyanka Chopra posing with Pan Nalin, Bhavin Rabari and producer Dheer Momaya. They seem to be enjoying a candid moment, and Priyanka can be seen laughing in the picture. The next picture shows Priyanka Chopra, and Kal Penn, who also attended the screening. In the next picture, Priyanka poses with Bhavin Rabari. While PeeCee opted for a black one-shoulder outfit, Bhavin was seen in a white-and-red traditional attire. In her caption, Priyanka Chopra wrote that the least she can do is support the industry that taught her all she knows about her job.

“The least I can do is always support the industry that taught me all I know about my job. So proud of the amazing movies that come out of Indian cinema. ‘Chhello Show’ being one of the special ones. Good luck team! Go get ‘em,” wrote Priyanka. She further explained that Chhello Show is a regional language movie that has been selected as India’s Official Entry to the Best International Feature Film category at the 95th Academy Awards.

While concluding the caption, Priyanka Chopra also thanked her BFF Isha Ambani for lending her luxurious LA home for the screening of Chhello Show. “P.P.S. Thank you @_iiishmagish for lending the team your LA home for the screening!” she wrote. Priyanka and Isha Ambani share a close bond, and in an interview with Vogue, Isha once mentioned that PeeCee is like an elder sister to her.

“We actually got closer when we were both living away from home in the US. We again share a very real relationship- we see each other in real-life settings and not in like glamorous ones; we have real conversations. She's a really strong mentor and role model,” she said.

Yesterday, David Dubinsky also posted several pictures and videos from the Chhello Show special screening. The pictures show him posing with Priyanka Chopra, Bhavin Rabari and others. One of the videos he shared shows Priyanka talking about single-screen theatres in India, and how her late father Dr. Ashok Chopra would bunk school during his childhood to watch movies on the big screen. She also asked Bhavin Rabari about the only movie he had watched before being cast in Chhello Show. He responded that it was Aamir Khan’s Dangal.

Another video clip shared by David Dubinsky gives a glimpse of Isha Ambani’s lavish LA home, decorated with beautiful lights and massive posters of Chhello Show. Other video clips show the beautifully designed outdoor spaces, while another clip shows a piano being played, while the guests interacted with each other.

Kal Penn also took to his Instagram account to post pictures from the special screening hosted by Priyanka Chopra. He wrote, “Amazing evening at the Last Film Show screening - go see this! Congrats @pan.nalin  @dnm_roots  @iambhavinrabari & thanks @priyankachopra for hosting. Oscar shortlisted for good reason! What an incredible story. So moving, especially to see such a universal film in Gujarati. #FYC.”

Apart from sharing pictures with the team of Chhello Show, Kal Penn also posted a video clip in which he is seen conversing with Bhavin Rabari in Gujarati. Kal Penn asks him if his Gujarati is fine, to which Bhavin replies, “yeah yeah your Gujarati is very nice.”

Pan Nalin took to his Instagram story to re-share Priyanka Chopra’s post, and wrote, “Thank you @priyankachopra Now we too can be beautiful, strong, fearless and believe in our selves when we have support of someone who is beautiful, strong and fearless- but so generous.” 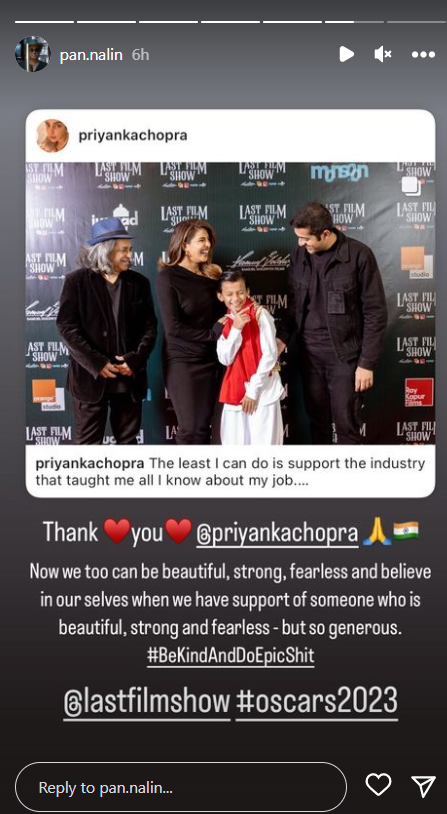 Chhello Show follows the story of a nine-year-old boy who is influenced by the magic and science of light and shadow that lies behind film projection. The movie is available to stream on Netflix.

Anonymous
Jan 12, 2023
Sonam Kapoor and alia Bhatt are politely requesting pspparszzr not to take pictures of their babies. Thia one here has a photographer on stand by.
0 REPLY

Anonymous
Jan 09, 2023
PC should immediatly stop showing all her teeth for every small thing .
0 REPLY

Anonymous
Jan 09, 2023
Needs to insert herself into anything important from India as she has no credibility of her own
0 REPLY

Anonymous
Jan 09, 2023
Saw a pic of her baby\'s hand in one pic, seriously creepy looking, how undernourished and pre-mature is this baby?
0 REPLY See More answers
View more comments