There are a lot of Bollywood couples who have ringed in their new year amidst wildlife. Today we bring to you a list of couples who celebrated new year like this. We are just a couple of hours away from entering the new year 2023. Months before this day arrives, everyone is busy making plans for new years eve. Well, apart from their own plans, Bollywood buffs are quite interested in knowing about their favourite stars and their new year's eve plans. Every year these celebs visit different holiday destinations and ring in the New year with their loved ones. There are a lot of BTown couples who have ringed in the new year amidst wildlife. Scroll down as we mention the names of other celebrity couples who had a wildlife celebration.

Recently, Varun Dhawan along with his wife Natasha Dalal was spotted at Mumbai airport heading for his new year vacay. What caught everyone’s attention was his randomly bumping into his friend Arjun Kapoor at the airport. Well, the actor took to his Instagram handle today and shared a video of him enjoying a jungle safari. He spotted a tiger walking right beside his jeep. We can also see a glimpse of his wife in the jeep. He captioned the image as, “When the Bhediya meet the Tiger.” Well, they are not the first Bollywood couple who chose to spend their festive time amidst wildlife. There have been several other couples who too have proved their love for wildlife.

These days airport seems to be a star-studded area as most of the Btown celebs are jetting off to a holiday destination to ring in the New Year with their family and loved ones. One of them is Vicky and Katrina who recently took off to Rajasthan to spend some quality time amidst the wildlife. The couple has been sharing some lovely snaps from their trip and we cannot stop looking at them. Both Vicky and Katrina seemed to have enjoyed their wildlife holiday together and their happy pictures are proof of it. Although, they returned to Mumbai before ringing in the new year, just a couple of days back.

When it comes to two actors in Bollywood who have been linked to each other for quite some time, Sidharth Malhotra and Kiara Advani’s name comes to mind. The two will reportedly soon be hitched. Well, amidst rumours of them dating, the two stars recently jetted off to an undisclosed location to ring in their New Year. Well, even these two have spent some quality time amidst wildlife and it was rumoured that they rang in 2020 with each other enjoying a jungle safari. Kiara had taken to her Instagram to drop some stunning pictures from her vacation then. Along with the photos, the Laxmmi Bomb actress had also shared a video in which she can be seen enjoying a wildlife safari. In the video, Kiara is seen sitting comfortably in an open jeep while someone shooting the video can be seen going ‘wow.’ Fans have been wondering if the voice in the video is of none other than Sidharth. Sidharth too had shared a photo from the wilderness which added to the speculations of the two spending the New Year’s together.

Rumoured lovebirds Ananya Panday and Ishaan Khatter spent New Year 2022 together. On the first day of the year, the duo took to social media to give their fans a glimpse of their New Year celebration. Unlike others, the duo bid adieu to 2021 amid wildlife at the Ranthambore National Park. While Ananya Panday said, “Entering 2022 with a grateful, happy heart, stay safe, be kind & make every moment count #YearOfTheTiger.” On the other hand, Ishaan Khatter wrote, “Eye of the Tiger & with that, we begin the year of the tiger!!!.”

2021 had begun on a fun note for Deepika Padukone and Ranveer Singh as they were off on a vacation to Ranthambore. Deepika's family including Anisha, Ujjala Padukone & Prakash Padukone also joined the couple on the trip. Deepika and Ranveer were vacationing with the former's family in Ranthambore and from the photos, it appears that the couple is surely making the most of the winter chill. In the photos, we can see Deepika and Ranveer having a gala time as they go out exploring the wild. In one of the pictures, Deepika, and Ranveer are seen striking a perfect pose with Anisha, Ujjala, and Prakash Padukone on the jeep. The Chhapaak star is seen clad in a green hoodie while the Gully Boy actor could be seen flaunting a cool look in a check brown overcoat and cool shades. 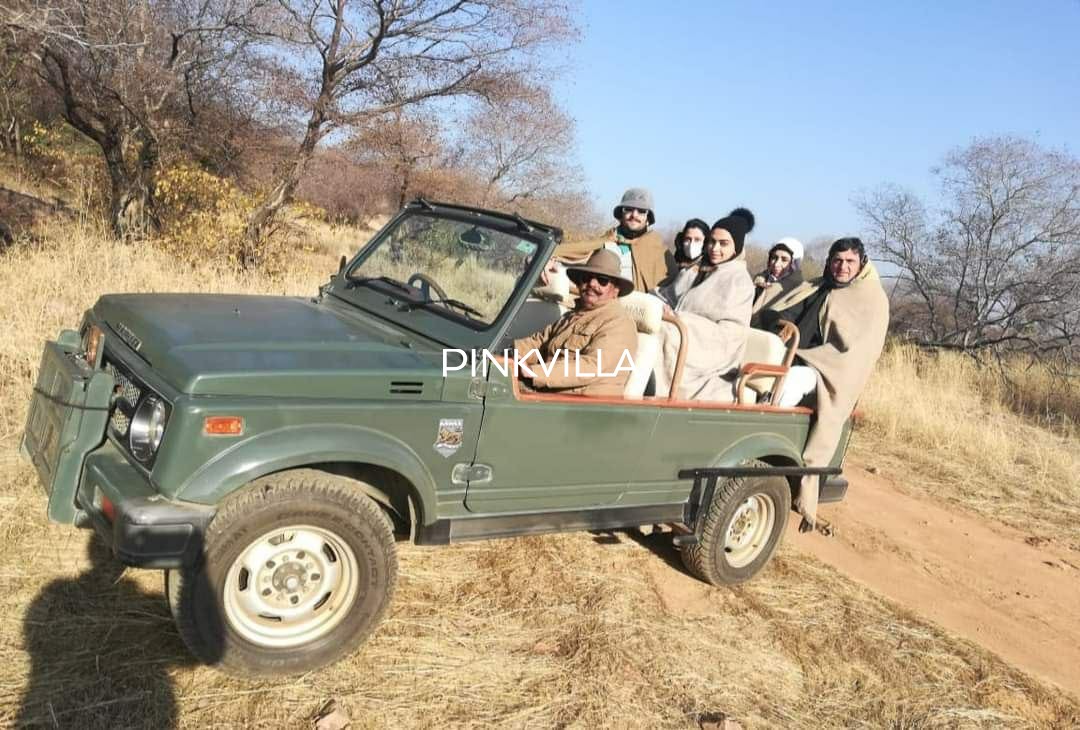 For the popular couple Ranbir Kapoor and Alia Bhatt, 2021 had begun on a high note as they had jetted off to Ranthambore with their respective families to celebrate the onset of the New Year. In the photos that went viral, Alia and Ranbir could be seen sitting on a jeep behind Soni Razdan and Shaheen Bhatt. While it is visible that Ranbir, Soni and Alia are wearing masks, we can also see them enjoying the wildlife together in the Ranthambore forest. Alia could be seen sporting a black beanie cap with a camouflage jacket while Ranbir is seen sporting a check shirt with a sleeveless beige puffer jacket.

ALSO READ: Inside Vicky Kaushal-Katrina Kaif’s wildlife holiday: 10 pics that give a sneak peek into their New Year trip

Anonymous
Jan 01, 2023
Did anyone spot self proclaimed lion and lioness on their tour?
0 REPLY