From net worth, high-end cars, and annual income to box office collections, here’s a look at Thalapathy Vijay's net worth that you must check out Joseph Vijay Chandrasekhar, fondly known by the stage name Thalapathy Vijay, is one of the biggest superstars of the South film industry. At the age of 10, he started his journey in films as a child artist in 1984 with his father SA Chandrasekhar's film Vetri. He acted in almost 7 films as a child artist and also performed with Rajinikanth in the film Naan Sigappu Manithan.

At the age of 18, Vijay bagged his first movie Naalaiya Theerpu as the lead actor and it was Vikraman-directed film Poove Unakkaga, which brought him fame and popularity and the rest is history.

Having been in the industry for two decades, he also enjoys a massive fan base and is also the most bankable actor. He has a fan following that goes beyond boundaries, and sticks with him through thick and thin. In fact, the actor has a significant fan following internationally as well. Other than perhaps Allu Arjun, Vijay is the only non-Malayali actor who has a massive fan following in Kerala. In fact, he is one of the biggest box office kings in the state and his thriller film ‘Theri’ was such a big hit in Kerala that it managed to defeat many Malayalam films in the process.

While his acting and dancing skills make his fans go berserk, did you know he is also the wealthiest actor in Indian cinema? He owns a whopping net worth of Rs 445 crores and many expensive assets.

From net worth, high-end cars, and annual income to box office collections, here’s a look at Thalapathy Vijay's net worth: 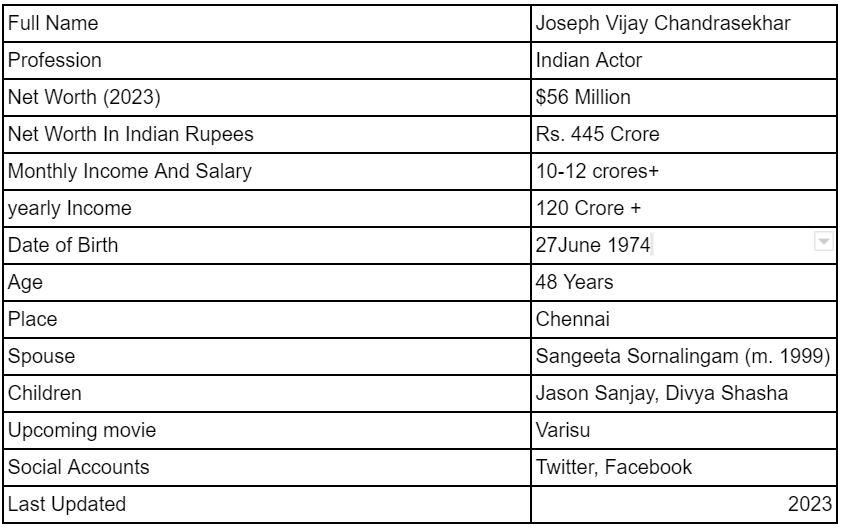 As Wikipedia and GQ, Thalapathy Vijay's current net worth is 56 million dollars, that is Rs 445 crores. Reportedly, the actor earns an annual income of Rs-120 to 150 crores.

Thalapathy Vijay is the biggest actor and takes home a huge paycheque with every film. Yes, he is the highest paid actor in the South film industry. The actor charged Rs 100 crores for Beast, directed by Nelson Dilipkumar. Thereafter, he maintained his 100 crores club and took a hefty pay of Rs 150 crores in his next, Varisu, which was released on January 11, clashing at the box office with Ajith Kumar's Thunivu.

Pinkvilla has exclusively learnt, Thalapathy Vijay has charged a whopping Rs 150 crore for Varisu, surpassing the fee of many South and Bollywood biggies. Clearly, filmmakers and investors are willing to ride mega-budgets on Vijay. 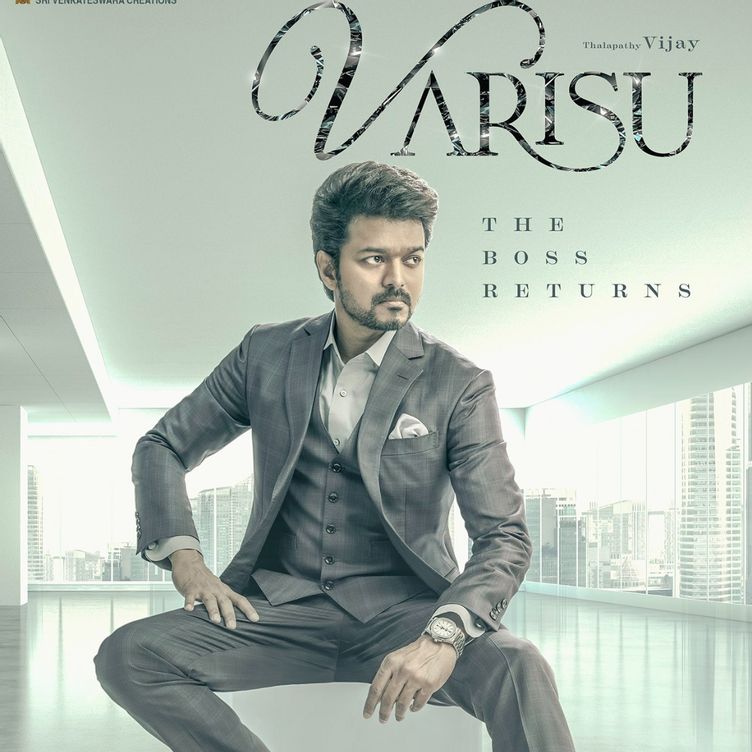 Owing to his popularity, Thalapathy Vijay makes smart choices when it comes to his collaborations with brands. According to reports, the actor earns an estimated Rs 10 crores per year for his several brand endorsements. Vijay is the brand ambassador for many international brands and sports team as well.

Thalapathy Vijay lives with his wife Sangeetha Sornalingam and two children Jason Sanjay, and Divya Shasha at a lavish seaside bungalow. The actor's house is located at Casuarina Drive street in Chennai's Neelankarai neighborhood. According to Housing.com, Vijay's luxe abode is inspired by Hollywood actor Tom Cruise's beach house. During his visit to the US, Vijay saw Tom Cruise's beach house. Impressed by it, Vijay got a picture and replicated a similar beach house. Reportedly, the exterior of the house looks classy as it comes in pristine white.

On 5 February 2020, the Income Tax Department raided Vijay's residence in Chennai and inquired about potential tax evasion, making note of his investment in immovable properties, which he inherited from the production studio AGS Entertainment. On 12 March, officials stated that nothing significant was found during the raid. 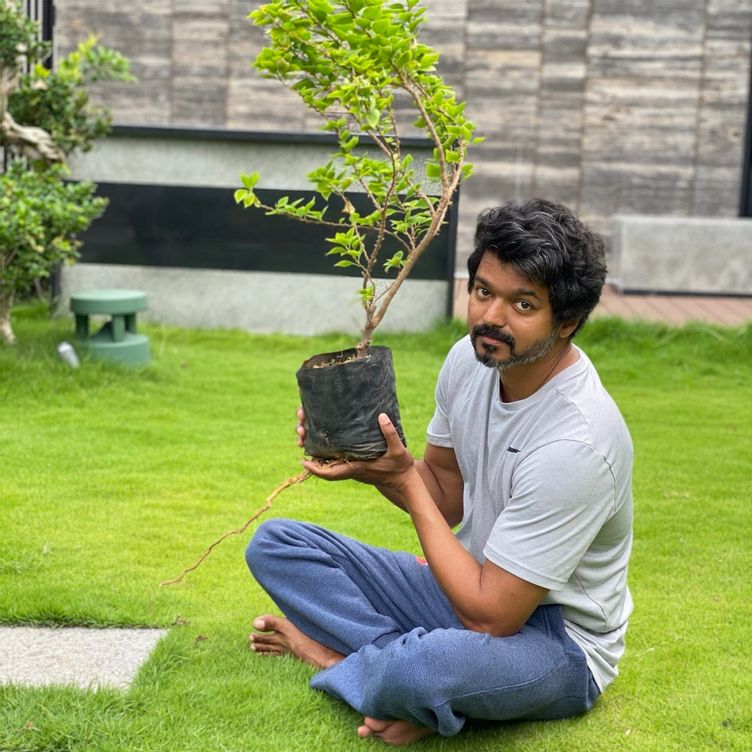 Thalapathy Vijay lives a king-size life on and off screen. He is a master of some expensive cars. His most talked about the car is Rolls Royce Ghost, which he got imported from England. In fact, the actor was also caught in a controversy because of his car. Thalapathy Vijay was fined Rs 1 Lakh by the Madras High Court last year for not paying entry tax on his Rolls Royce car. Back in 2012, the Master actor had filed a petition for a tax exception for his Rolls Royce car, which he had imported from England.

Thalapathy Vijay’s education and debut as an actor

Vijay was born in Madras (now Chennai), Tamil Nadu. His father S. A. Chandrasekhar is a film director and his mother Shoba Chandrasekhar is a playback singer and carnatic vocalist. He studied at Fathima Matriculation Higher Secondary School and later joined the Balalok Matriculation Higher Secondary School at Virugambakkam. For graduation, the actor went on to pursue a degree in Visual Communications from Loyola College. While studying, at the age of 18, he was launched by his father.

Vijay bagged his first movie Naalaiya Theerpu as a lead actor at 18 years of age and it was Vikraman directed film Poove Unakkaga, which brought him fame and popularity. After that, there was no stopping for Thalapathy, he gave many blockbuster films.

Vijay’s romantic thriller film Azhagiya Tamil Magan, where he played the role of the protagonist and antagonist at the same time collected 1.043 million dollars overseas, a top grosser at overseas box offices in 2007. Screen Daily, a British magazine, reported that Azhagiya Tamil Magan had entered the top ten Asian films box office hit chart in Malaysia in 2007. Kaavalan was screened at the Shanghai International Film Festival in China. The film was also released in Japan in the cities of Tokyo, Ebina, Osaka and Nakaya. For his role in Mersal, Vijay was nominated for the Best Actor at the National Film Awards UK in 2018.

Vijay's wax figures were unveiled in different parts of India, especially in Kanyakumari Museum. Vijay received an honorary doctorate from the Dr. M.G.R. Educational and Research Institute in 2007 in honour of his achievements in the film industry. Vijay was awarded the 'Best International Actor of 2018' in the United Kingdom.

Meanwhile, Thalapathy Vijay's film, Varisu released on January 11, clashing at the box office with Ajith Kumar's Thunivu. The two leading men from the South will be locking horns after a long gap of 9 years. The film is also releasing in Telugu titled Varasudu. Directed by Vamshi Paidipally, the film features Rashmika Mandanna as the female lead.

According to the reviews, the Thalapathy Vijay starrer is a wholesome package of family drama, humour, romance, high-octane action scenes, and colourful song sequences. The netizens suggest that the Vamshi Paidipally directorial is a complete entertainer to watch in theatres this festive season. Thalapathy Vijay, the leading man is also receiving immense love for his unmatchable screen presence and onscreen charm.

Thalapathy Vijay is set to reunite with talented filmmaker Lokesh Kanagaraj for his 67th film. The highly anticipated project, which is touted to be a gangster thriller is yet to be announced officially. Thalapathy67 is one of the most anticipated films in the South. Even before the official announcement of the project, it achieved a huge feat. Reportedly, it has become the biggest Tamil film ever in terms of pre-release business, which has almost touched 500 crores.

Lokesh Kanagaraj also hinted that Thalapathy 67 is also a part of LCU aka Lokesh Cinematic Universe, much like his three popular outings, Maanagaram, Kaithi, and Vikram. Vijay is touted to be playing a gangster in his 40s in the film, which reportedly features Trisha Krishnan as the female lead. Sanjay Dutt, the popular Bollywood star will make his Tamil cinema debut with the project, as the lead antagonist. The project features a stellar star cast including actor-director Gautham Vasudev Menon, Mansoor Ali Khan, Arjun Das, and others. Malayalam actor Nivin Pauly is also rumoured to be a part o the cast. Director Lokesh Kanagaraj is reportedly reuniting with the crew members of his last outing Vikram, including dialogue writer Rathna Kumar, cinematographer Girish Gangadharan, editor Philomin Raj, and music director Anirudh Ravichander, for the Thalapathy Vijay starrer. 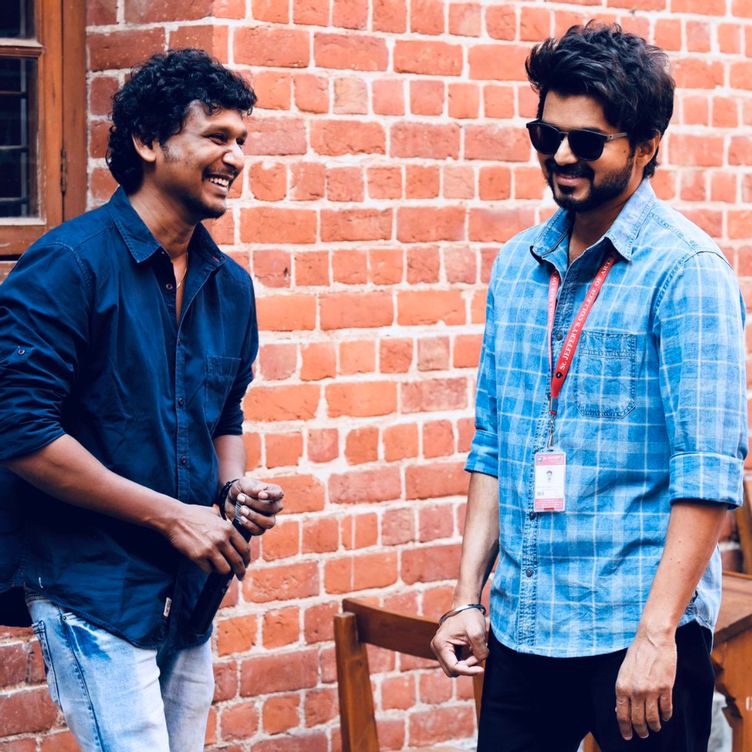