Katrina Kaif and Vicky Kaushal are among the most adored couples of Bollywood. The lovebirds have a massive following on social media, and their fans can’t stop gushing every time Vicky and Katrina post romantic pictures together. Yesterday, Katrina Kaif’s sister Isabelle Kaif celebrated her 32nd birthday, and both Vicky and Katrina shared lovely posts on Instagram to wish her. Katrina and Vicky were also present at Isabelle’s birthday bash, and looks like they had a blast together. Apart from Vicky and Katrina, Isabelle’s birthday party was also attended by her brother Sebastien Laurent Michel, and friends Sunny Kaushal, and Sharvari Wagh among others.

Isabelle Kaif and Katrina Kaif both shared pictures from the birthday bash on Instagram. On Friday, Katrina Kaif posted a picture that showed her posing with birthday girl Isabelle. For the occasion, Katrina opted for a white printed dress with full sleeves, and she looked absolutely radiant. Meanwhile, Isabelle opted for a strappy black mini-dress with silver fringe detailing on the neckline. The picture also gives a sneak peek of the birthday décor with yellow, golden, and black balloons. “It’s iszeeeeeeeeeeee happy birthday,” wrote Katrina Kaif.

Apart from this, Isabelle Kaif also shared a few pictures from the bash. The first picture shows Isabelle and Sharvari Wagh in a goofy, fun pose. While Isabelle raised her arm and smiled for the camera, Sharvari was seen lifting Isabelle’s leg and pouting. Sharvari was seen in a black cutout dress, and had a beige bucket hat on. The next one is a group picture that shows Isabelle with Vicky Kaushal, Anand Tiwari, Sebastien Laurent Michel, Sunny Kaushal, and Sharvari Wagh. Vicky and Sebastien had hilarious expressions in the group picture. The next one is a blurry picture of Isabelle, while the last picture is from the day after the bash, and it shows Isabelle tucked up in bed with a huge bouquet of colourful flowers next to her, on the bedside table. Isabelle is seen grinning from ear to ear, and looks like she had a great time celebrating her birthday.

In her caption, Isabelle wrote, “how it started to how’s it going thank for all the love guys.”

Mini Mathur dropped a comment on Isabelle Kaif’s post that read, “Fomo (fear of missing out) max,” to which Isabelle replied, “@minimathur you were missed.” Rohini Iyer wished Isabelle, and commented, “Happy birthday my darling @isakaif.”

On Friday, Vicky Kaushal took to his Instagram story to share a lovely picture of Isabelle, and wrote in his caption, "Happy Happy Isy! Wishing you a year full of love, laughter and good health." Isabelle thanked Vicky Kaushal and wrote "Thank you," along with a heart-eye emoji. 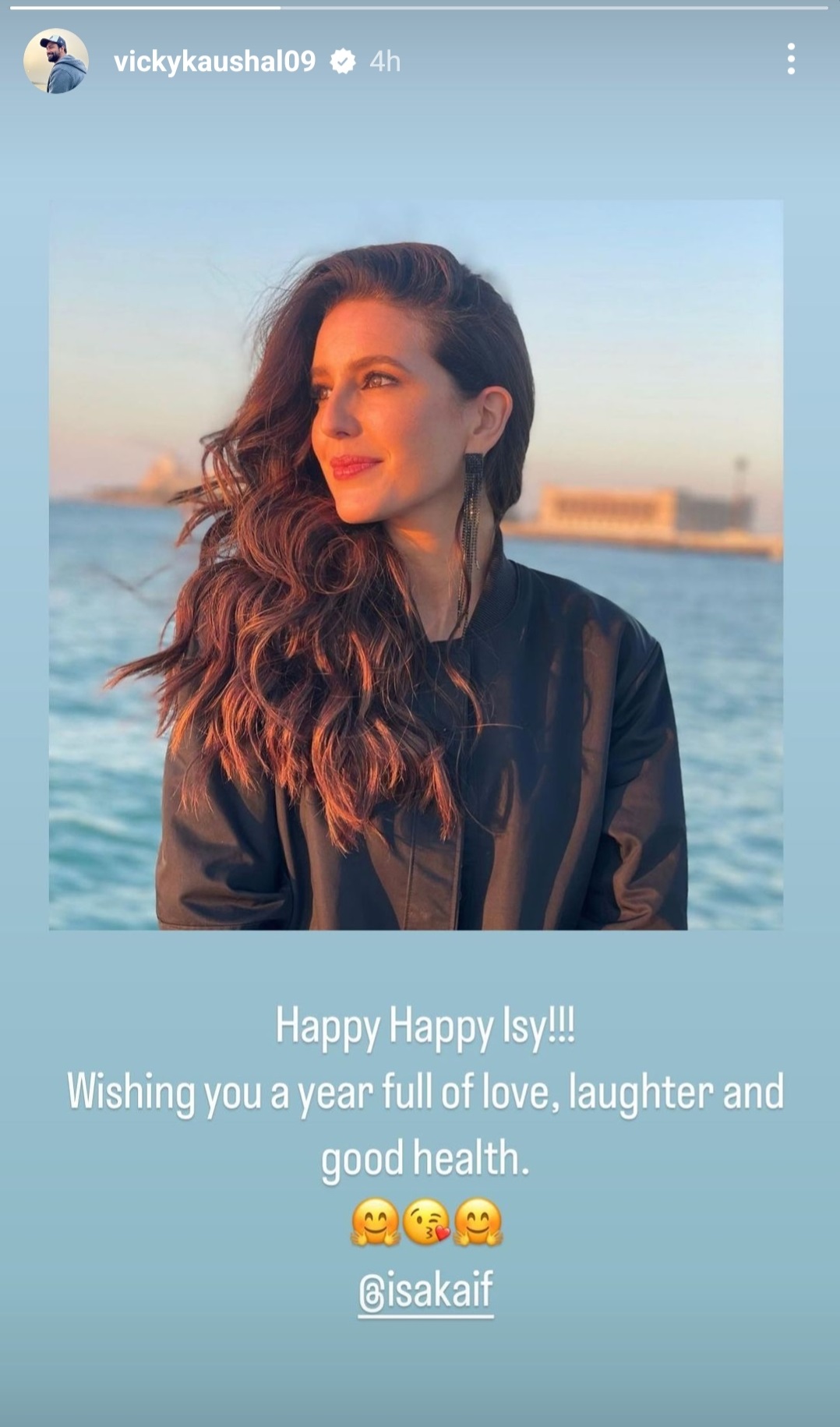 Vicky Kaushal shares a great bond with Katrina’s sister Isabelle. Isabelle was also a part of Katrina and Vicky’s Christmas celebrations. A few days ago on Christmas, Katrina shared a group photo from their pajama party at their house. The picture showed Vicky and Katrina posing with Vicky’s parents, Sham and Veena Kaushal, his brother Sunny Kaushal, and Katrina Kaif’s sister Isabelle.

Just yesterday, pictures of Vicky Kaushal and Katrina Kaif visiting Siddhivinayak Temple in Mumbai, hjad gone viral on social media. The pictures show Vicky in a white shirt and trousers, while Katrina looked gorgeous in a green ethnic suit. Katrina had a dupatta over her head, and while one photo shows the couple posing with a Ganesha photo frame, another picture shows them with Vicky’s mom seeking blessings from Lord Ganesha.

Isabelle Kaif made her Bollywood debut with the 2021 dance film titled Time To Dance. Produced by Lizelle D’Souza, the film also stars Sooraj Pancholi and Waluscha De Sousa in the lead roles.  Isabelle will next be seen in Lalit Butani’s Kwatha, which also stars Aayush Sharma.

Vicky Kaushal, who was recently seen in Shashank Khaitan's Govinda Naam Mera with Bhumi Pednekar and Kiara Advani, will next be seen in Meghna Gulzar's Sam Bahadur alongside Sanya Malhotra and Fatima Sana Shaikh. He also has Anand Tiwari's yet-to-be-titled film, which also stars Triptii Dimri and Ammy Virk.

ALSO READ: Inside Vicky Kaushal-Katrina Kaif’s wildlife holiday: 10 pics that give a sneak peek into their New Year trip

Anonymous
Jan 08, 2023
Why is Isabella hanging around . She’s too old for a comeback .
0 REPLY See More answers